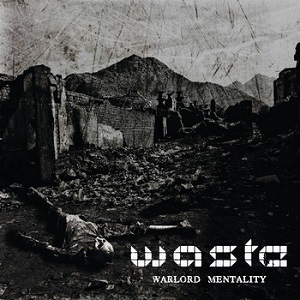 Spotify
Released 2014 by Vendetta Music
Noise, Industrial
W.A.S.T.E. has always solidified themselves as one of the most respected acts I have ever gazed my eyes upon. Never going with the trend and constantly pushing out music that shoots sonic assaults into your ear drums, they have made their mark in the underground scene, coveted and enjoyed by many. With over ten years of experience producing music under this moniker, Warlord Mentality is their latest album coming off of Vendetta Music, this time adding vocals, an amazing The Offspring cover, and a riveting harsh but danceable industrial soundtrack.

Beginning off with a slow dark ambient intro that showcases a distant land long forgotten, Are We Just Animals brings in the rough heart pounding crashing noise in just half a minute. Adding in glitched out samples about on person talking of others on fire, getting shot by some sort of crazy person only added to the beautiful chaos. The mixture of rhythmic noise that's constantly maintaining the same mood yet changing in beat and style in this six minute plus song was absolutely stellar.

You Are Your Own Beast keeps up the brilliant rhythmic noise, this time playing with more distorted electronics to bring about an almost factory like sound to the song. It's like music for the monotonous worker to wake up and realize they have more potential than they are giving out.

Utilizing a sort of wind instrument sound to kick in the feel of the song, the title track Warlord Mentality slowly drifts in with a fast paced and hard beat that really just kicks the shit out of your aural senses with all the love in the world. The blasting beats backed by an amazing synth number managed to garner goosebumps all across my skin and catch me off guard. Perhaps a noisy track that I can just close my eyes to and escape from reality, it was a pure work of art.

Ambient sounds and an echoing effect made As The Empty Hours Go By really maintain a unique atmosphere to it. Perhaps pulling off the effects even better than most established acts in the ambient field, each clatter of noise, every pulse that reverberates is beautifully echoed in the most haunting manner possible, but it is positively gorgeous.

And then we come across a song that I must have listened to a million times since I first heard that this album was announced. Featuring Jamie Blacker of E.S.A., Gone Away is a cover of The Offspring's song of the same name. Now, I'm not a huge fan of The Offspring, and have hardly ever heard their work in the past, but I'll be damned if I don't say that this is one of the best covers I've heard in my lifespan. Everything from the soothing harsh beats to the fantastically done and inspirational vocals makes this the stand out track on the album. If ever the word perfect should be used to describe something, I think it would fit well to define this song.

But, it was enough time playing around with smooth material, and it was straight back into teeth cracking territory. Destroy What Destroys You turned out to be one of the louder tracks on the album, but it was well deserved. Slamming beats through one ear and out the other has become a trademark of this band, and I am so glad they haven't stopped doing as such. There is a bit of an intermission placed in the middle of the song, with a dark ambient, atmospheric segment coming along before placing you right back in the midst of this turmoil.

Originally out in 2011, Deadface now sees a redux version by frontman Shane Englefield AKA Vuxnut. And, what you can expect from this track is a more crisp and clear version, much better sounding than the original and kicking that much more ass.

No More Feelings allows a bit of an intro to play along before really getting into the pulverizing material. I wasn't quite sure why there was a randomly placed sample of Geto Boys' Gangster of Love in the song, but, hell, it was there and then it went. Anyway, the feel of the song allowed every dark sound to mesmerize and cause panic before finally heaving in with another skull clobbering beat.

Glitching samples and electronic sounds began off Caveman, but the main stay of the song came in the latter form of a steady, hammering beat that laid waste to everything around it. Kick in some neat electronic effects reminiscent of the intro, and the song entertained greatly.

Perhaps more stomp worthy than other tracks, Kill Something took no time in getting straight into business. Clashing slow synth work right against the quick rhythm beat was great work, and managed to make me crack a smile as I enjoyed my time with this song.

We Carry These Things Inside Of Us once more played with the idea of background synths leading behind the overall punchy beat that was made out to be the main attraction of the song. But, much like peanut butter and jelly, the two pieces matched together crafted such a well bred beat that the track turned out to be another hit.

Lastly, Scream All You Want turned out to be one of the most noise oriented tracks on the album. A majority of the first half descended to nothing more than harsh static noise pummeling over distorted samples, which was a great painful pleasure to my ears. The second half was where a beat formed, but the static noise still followed the beat, never leaving, and constantly reminded us of how the song began in the first place. Extremely well done, and a fantastic way to go out.

And, if this album doesn't make you a believer in W.A.S.T.E., then I don't know what will. The underground is perhaps shaking with joy already as their new stomping rhythms hail all across dancefloors around the scene, and that is to be expected when a release so great as this comes forth. Every note manages to both invoke anger and relief. A steady stream of addicting beats and destructive noise manages to make this an album worth both listening to and making a note of for your playlist.
# waste
# rhythmic-noise
# dark-ambient
# warlord-mentality
# the-offspring
# esa
# vendetta-music
# esa
Nov 08 2014
Ctrl_Alt_Del - 'Dr. Electric Fingers'
Previous article
Swarm Intelligence - 'Faction'
Next article