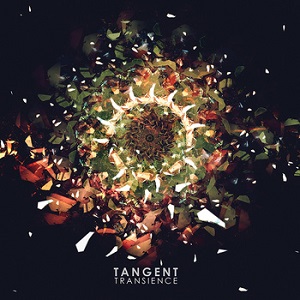 Spotify
Released 2014 by Tympanik Audio
Ambient, Electronics
From a experimental electronic duo hailing from the Netherlands who describe themselves as creating ambient beats, Tangent has hit the books with some critical acclaim already. With their previous album 1mk2 being caught on by Mindtrick Records and released by them one in the same, audiences and critics alike fell in love with the sounds brought on by these two Dutch folk. And, with a certain level of love already proclaimed for their works, they decided to form another love baby and release Transience via Tympanik Audio.

And, really, as soon as I started to play the album to let the fantastic orchestral movements bless my ears, my immediate words were, "This is ambient done right." And I don't often go about saying that by far. Drifting Frontiers kicks out a forbidding, and atmospheric pleasure that sounds as if it's going to just lurk in the standard dark ambient fair of these, with few and far in between effects and a simple ring to it. However, that changes as slightly glitched digital notes come into play, as if you're exploring a vast and beaten wasteland that's just crawling with all sorts of technological wonders. A rolling beat comes into play about half way into the song, still maintaining a bit of a glitch effect on top of lovely, well worked synths. And, from hear on out, the tune of the song just maintains a completely amazing and mesmerizing sequence that I just could not escape from. The end of the song features drum work from afar with a singular note, almost as if it's a radar in a submerged submarine. Once more, this track was truly fantastic.

Sublimated begins off with a pretty steady beat backed by layered synths. Though I do think the synths were a bit overpowering in comparison to the soothing rhythm that played out, the clash of drums and such made for a bright composition. The second half of the song dropped the electronic flow, and heralded the ambience, allowing a few moments for static to raid your ears, alongside more very faint glitch effects. Towards the end of the song, a very slow, bass section appeared, coming in and out, and eventually transitioning right into the next song.

The bass/drum work still maintains it's effect, as does the ambience in Shattered, but electronic notes play a bit of a feature as well amongst a static sound that serves as an overlay to every other sound available. At the middle of the song, the transition to more ambient structures streamed nicely as noise flooded the song, and eventually silenced into a high pitched singular note. And that's the one part of the song that I didn't appreciate too much; it wasn't pleasurable to listen to, but more or less hurt my ears.

However, Expanding Horizons brought me right back up with a very beautiful introductory sequence in which lower pitched, slightly faded and drawn out keys struck underneath a very firm drum line that served as the main sequence. The ambient chords still struck highly in the background, providing a dream like structure to the song. Near the end of the song, more static filled in alongside the drawn out keys, and it became kind of creepy as the samples of what sounds like a school ground played along with the notes. This led to another transition right into Discovery.

And this track furthered the whole dream sequence even further; the children's laughs and shouts did not cease, and wrought that theme out further. It was interesting to listen to, but the sounds of water flowing with the scattered glitch effects was the main attraction of this song; what sounds like an echoed xylophone rang in, as well, creating such a meditative piece. As a drone like note, low in texture, came in as the final chord, we were led right into Radiating Singularity.

This song sort of held onto a very sacred, natural touch; the sounds of a forest can be heard in the background, with very slight piano work sketching in and making an even bigger impact than it's slight appearance might lead you to believe. As a electronic movement begins, the ambience gets louder, the piano work follows through, and the song just gets better. Near the end, the movement dies down, the sound gets lower, and this section of the album ceases.

Bloom blossoms in next, having a pretty standard synth intro focusing on atmosphere, and for much of the first two minutes, it served as a pretty heavenly sounding drone track. An electronic beat is built up, not heavy on bass, but more or less focusing on more glitch effects; what sounds like a stone grinding into glass creates a primitive sound among the technological sounds. Another drone note, another transition.

The use of primitive noises along with riveting electronic focus continues in Condensed Reality. And the title serves well, here; the futuristic sounds paired with falling back tendencies made me feel as if I was stuck in a bit of a vortex, somewhere between the ancient past and the present. The ending of the song was standard, with a bit of ambience ending us off with a bit of a windy feel to it.

Reformed Construct continues where the last left off, offering more glitch effects along with the ambient work. A bit of a tribal sound is formed with the drum work and what I felt to be a bit of traditional instrumentation like effects. Even if that isn't the case, that's the feel I got from the song, and I liked it. A fairly minimal section is placed at the end, and, with the higher pitched, but not ear busting synths leading the way, I couldn't help but enjoy it.

I feel as if the light hearted synth work presented in Unchained were some of the best on the album, and even made me feel a little sleepy; if anything, consider this a wonderful lullaby to go through. When the ambient strikes in the second half of the song once more, you could say that the synth lines became less short, and longer in digestion to pair with the reflective essence of the work.

More static fills in as Retreating Awareness came in, like that of a TV invading a personal delusion. The noise mirrored back at you can only echo that of a daytime fantasy, though I will say an intrusive screech of sound really downplayed the whole relaxing effort. It came and went in the song, but, without it, the track was magical.

And, finally, Reversion ends off the album in a wonderful fashion. Almost going back to the roots of the first track, this one managed to once again really display why these two are allowed to describe themselves as making ambient beats.

And I've had every last ounce of music this album has poured onto my soul, and I come out of it both thankful and peaceful for having been a part of this material; the songs were wonderfully spun together, and crafted an elegant work of art that managed to touch and sway me between complete fascination and blissful relaxation. These two managed to wow other critics in the past, and you can now consider me on that list; they created something wonderful, and I do think more people need to hear this. Little flaws in the album are pretty much eradicated through all the good. Take a seat and listen to this will fully open ears; there's not much you can do to stop enjoying this work.
# tympanik-audio
# transience
# tangent
# glitch
# ambient
Aug 19 2014
Free Projekt Sampler Via Bandcamp
Previous article
Interview with Sagan
Next article

Tympanik Audio Bandcamp
Orations - Receiver is available at POPONAUT from 14,45€

Mechatronic - 'Promises From The Past'