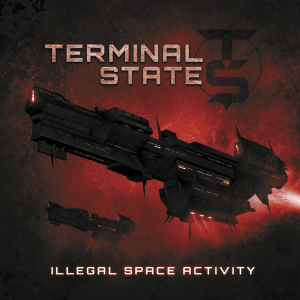 9.0
"Amazing"
N/A
Electroracle
Released 2013 by Electro Aggression Records
Old School EBM, EBM
EAR 003 carries on from the legacy of "Old School Electrology" and "Mechanisms of Faith" with the second album by Slovak duo Terminal State. As always, value for money is the deal here, with Nader giving us another double album to get our salivating jaws around. Is a sci-fi themed album something that we can universally digest, however? Let's see.

Illegal Space Activity
13 Original tracks give us the meat and veg of this release, with a total of twenty-five tracks to get our heads around.

"Perished" starts our journey. A strong combination of soundscapes, Industrial rhythms, and seriously cosmic sounding effects deliver something that can't really fall under a blanket genre. For an album themed around space, the sounds are spot on, and this has a really galactic approach to it.

"Early Warning" is the first track to feature vocals, and it sets a trend on the album of being over Six minutes in length - something we will see time and time again. Led by an ominous, pulsating effect, the track is both eerie and comforting; dark yet brilliant.

"Fatalist"" borders Hypnotic in its structure, with a core sound that is as close to old-school that the act seem comfortable to explore. It's such a great listen for someone who thinks they've heard all that the Electro genre has to offer - boundaries are clearly being shattered with this release - the array of different textures and atmospheres could form a solar system of their own, and there's little going on that I can point to and say "Oh, this sounds like X, or that loop was used in Y" - this album is so Spacey that I am tempted to call it Kevin. (Complaints to the usual address...)

The varying trend isn't really buckled with "Andromeda" - a beautiful track that is just meant to be a movie soundtrack - it's got that pace, the decorum, the build up - it would work perfectly as credits to a film. Glorious.

"Symmetry of the Shadows" is a slower track, executed well, delivering us a one-two as it leads into "Ultraviolet Coma" - fast and atmospheric, with my favourite vocal track on the release thus far.

With "Last Prophecy", We're given a lesson in sequencing which manages to make the album sound more and more out of this world as it goes on. Actually, as much as I hate the comparison, those who have heard the intro to "Non-Stop Violence" by Apoptygma Berzerk will know what I mean when I mention the hectic, swirly and involved synth intro - this album is an entire ensemble of similar sounds, but laden with so much more of a darker, "voided" side.

"Devastating Toxicity" does what the label suggests - as we get further and further into this alien environment, everything becomes more barren and hectic - there's even an added sense of extra urgency. I could seriously play StarCraft II Zerg missions to this release and it would fit, so so nicely.

"Sleepless Night" reflects exactly on my thoughts after several weeks of digesting this release - I've had entire templates and articles cancelled and re-written. It's something I just can't ever truly give justice to - I did a seriously mad galaxian themed review, but my good friend and colleague Luke did something similar over at Reflections of Darkness, and to be honest, I can't best his effort. Truly an amazing article and reviewer.

As the album approaches the final quarter for this disc, I'm most smitten with "Outbreak" - offering yet more sounds we haven't heard before, but gorgeous little mini-melodies play this track into its very own orbit - complete with circling stars and sustainable life - believe me, you'll be returning to populate your CD player with this disc on many occasions.

Closing disc 1 is "Natural City - a fascinating track with effects like water dropping into a pool in a cave - but given a more alien touch. It's much calmer and ambient than the predecessors, and is probably one of the tracks I'd pull if I ever made a mixtape.

Disc two starts in atypical EAR fashion with a host of remixers from similar acts and label mates, but also gives us a whopping six more original pieces.

The famous and far, far too inactive Jihad remix Natural City first - giving it much more of an Old-School EBM feel. What impresses me about this is how it doesn't fall too far from the tree and remains pretty otherworldly.

Brain Leisure follow this up with two dark, heavy remixes ("Ultraviolet Coma" and "My Blood"), while Pyrroline lay into "Fatalist", retaining the trancy sound, giving it a bit more of a personalised feel.

"tEaR!doWn" remix "Last Prophecy", rendering the track seriously intense and frantic, and Terminal State themselves give us another stab at "Andromeda" with a mix that bests the original.

I have to say that I love all of the remixes, mainly because it was great to see how acts interpreted such unusual material. Moving on to the remaining original tracks, "Luc Cipher" is absolutely incredible. Redone from an earlier release, and Epic enough to be a Star Wars theme, this grandiose number is just waiting for a big action scene to take place - like opening the airlock to find a still-alive mutant about to attack - it doesn't disappoint.

"Under Control" is the closest track so far to "traditional" - it's very Belgian in it's EBM, reminding me strongly of Implant meets 32Crash. It almost serves as a warning too - the calm before the storm, as it leads into something very, very untoward :

"Infra Mental". Pulsing and delicate, the track builds into a seriously distorted vocal that's incredibly fucked up and creepy - a track to savor and enjoy whenever you don't want to sleep. See also : Sleepless Night. Great synergy, guys!

It'd be nice to calm the listener now, wouldn't it guys? However, "We're From Earth has no intention of doing so at all. It's another aural assault that only fucks with you the louder and more isolated you make the music. If you're listening through a set of expensive cans, you may just pass urine. This is textbook stuff - truly un-rivalled and unsettling.

With the penultimate piece, "Kings From The Sky", we go back a bit to more settling levels with a memorable track that harks back to the first disc. This leads us into the final, ten minute piece de resistancé - "Digging Deep".

Perhaps a nod to the first EAR release, and the mining/gems aesthetic that filled it from open to close, this track gives us the calm we desperately need after such an expedition, and is a dark ambient piece that soothes and agitates, exonerating us from our minds.

It took around 14 years for this to manifest - and it's done so like a swarm. However long it takes for the next TS release, I think I will need around that time to recover from this onslaught.

The Opposer Divine - 'Barb Wire Around Your Neck'