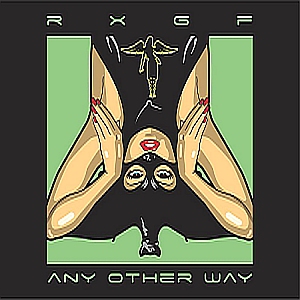 9.0
"Amazing"
N/A
Electroracle
Released 2014 by Orange Allies Records
Darkwave, Industrial
Whether by choice or not, RxGF has been flying under the radar a bit lo these four years they've been together. Their native city Seattle does have a tradition of going against the mainstream when it comes to music and art. The legendary indie label Sub Pop records is based in Seattle, as are many other subversive authors and artists. Even when the grunge scene flowered out of Seattle in the early 90s, many bands didn't do well with their unexpected fame (we won't mention any shotgun incidents in 1994), and only a few groups stayed on the pop radar.

My point? I hope I can be forgiven for coming a little late to the RxGF (the name stands for Radioactive Ex Girlfriend) party, as Any Other Way is their third album since 2011. The band is not without their accolades, however, despite flying under the radar. They were nominated for four AIMAs (Artists in Music Awards) in 2014 (winners still tbd, vote at AIMA.com), so the industry is clearly taking notice, and really that's what counts. Maybe I'm not as much of an 'edgy industry critic' as I'd like to think, but I like that this band tested me.

Style-wise, RxGF has experimented with quite a lot of different bits and bobs, with lots of genre fusion going on in their first two albums. Techno, industrial, dark wave, trip hop and good old fashioned indie rock all featured on their first two albums. Any Other Way seems to have landed more towards the industrial/dark wave end of the indie spectrum, but there is still lots to choose from and plenty of diversity on this album.

Some things are constant in the group, such as Angeline Schaff's deeply satisfying and Souixsie Sioux-like vocals and the electronic loops produced by Jonathan Plum and Matthew Burgess. With the evolution of RxGF's sound, however, it seems some of the trip hop elements on previous albums have been squeezed out of Any Other Way. This makes room for even more masterful drums and percussion by Burgess and John Morgan Rilley. Morgan Riley and Jonathan Plum's guitars feature more heavily in the band's current incarnation as well. Plum, who has produced for the likes of Pearl Jam and Alice in Chains, also did most of the production on this album and RxGF's other albums.

The first single off of Any Other Way, entitled 'How to Make It' was released with its corresponding video in June of 2014, well in advance of the album. This single is a perfect example of the new direction the band is taking with the new album, which released in November 2014. A 50/50 industrial/dark wave split, Schaff's echoing low alto creaks through the song as Morgan Rilley's heavy, almost metal drums support her. Though sparse, the electronic backing track and the guitar add an extra layer to fill in the gaps between vocals and drums. The group has come up with a very different and interesting way to compose a song here, and it definitely works. The lyrics in 'How to Make It' are a cynical look at the darker side of the music industry. They paint a grim picture of the corporate music world, once again showing the group's ultra-indie Seattle sensibilities when it comes to such subjects.

Other highlights abound on Any Other Way, beginning with the title track. If you like Siouxsie Sioux, this is your jam. Schaar's vocals are lilting and transcendent on this track as an industrial-style drum track once again holds up her melody. The electronic element mostly comes in the form of a bass loop on this track, but there is also a pretty, semi-gothic sample loop throughout. The combined elements of Schaar's vocals, the minor key in which the track is composed and the marriage of heavy drums and uplifting synths creates a familiar sound with a modern and uniquely RxGF twist.

The album stays on the industrial track as it moves on with 'We Will Not Be Denied' and the almost ravey 'Flesh and Bone' and 'Antidote.' 'Tombstone Soiree' is a fun, jazzy interlude in the middle of the album; it still has industrial and dark wave bones, but both the vocals and synths take a kind of lounge jazz angle which is unexpected and almost jocular. Lyrically a bit like Oingo Boingo's classic 'Dead Man's Party' and musically sounding a bit like the Yeah Yeah Yeah's 'Heads Will Roll,' 'Tombstone Soiree' is another definite download from Any Other Way.

'Never Felt So Good' is another break in the industrial tone of the album, as the band looks back at its trip hop roots for about seven minutes. In 'The Dying Grace of the Machines,' 'The Hit,' 'Things that Go Bang' and 'Kontrollier Die Kontrollierenden' John Morgan Rilley takes over the vocals to create an even more sinister sound. If Morgan Rilley's intent was to "Imagine the Superstar Destroyer, a monolithic and dirty old space ship several kilometers long lumbering through space at light speed. That's the feel and the sound of many of these new songs. You have these dark electronic layers with huge drums and dirtied-up vocals,' he's more than achieved it in these four songs.

This epic 17-song album closes with some more experimental sounds such as in the new-wave tinged 'Flow,' the trip hop-laced 'Belladonna Dream' Four b-sides from 2012 are tacked on to the Bandcamp offering: 'Jim Jones Death Tape,' 'Sweet Control,' 'D'aimer Et D'etre Aim`e' give new fans a good insight into the roots of RxGF's sound, and the trip hop/dark wave/indie sound is a reminder of how they came to arrive on their current tones.

Morgan Rilley and Schaar appear confident that in Any Other Way, RxGF have found their sound. While I agree that the band might be over any growing pains they felt they had, I think this band is too diverse and creative to simply stick to two or three genres. With the melding of live drums, industrial electro and Schaar's lounge singer voice, RxGF have definitely created something unique in this album. They've added many elements to their already solid musical base, but I wouldn't be surprised if there were even more interesting twists and tangents to come on future albums.
# rxgf
# any-other-way
# dark-wave
# industrial
Mar 05 2015
Interview with Blue Stahli
Previous article
iVardensphere - 'Fable'
Next article

Amazon
Sieben - Desire Rites is available at POPONAUT from 14,95€