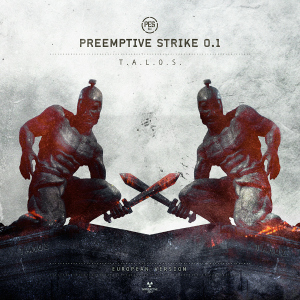 Spotify
Released 2012 by Metropolis Records
Harsh EBM, Dark Electro
Album of the Month April 2012 Album of the Year #10 2012
Sometimes, calling an album a giant undertaking can be taken literally. An album of this ambition could often disappear into the miasma, and for most bands, would simply be too much. For PreEmptive Strike 0.1, this is an average day in the office.

Greek mythology portrays Talos as a giant man of Bronze, protecting the island of Crete (also the home of this duo). He's also heavily featured in the mythos of the Argonauts, and this dedication for a local (but also very, very famous) legend has given us what seems to be the most original and unorthodox album of 2012.

For an act that's already given us the heavily sci-fi infused, multi-layered "Lethal Defence Systems", "Extinction Reprogrammed, " and "The Kosmokrator", "T.A.L.O.S." is an archaic trip to the past, vetoing any earlier notions of galactic threats and futuristic aesthetics.

This opus begins with "T.A.L.O.S (Extended)", and they've capitalised on previous experimentation by starting it with traditional Greek instruments - (the Cretan Lyra and Bouzouki are predominant, giving a truly stunning sound), leading this unfamiliar sound straight into a wall of synth and Jim's brutal vocals - amazingly the greek instrument is still playing in the background, forming a truly inspirational song. The lyrics are in Greek, but a translation is offered - Here's a short sample.

"Mythical Knossos - Ancient Crete, 4 Thousand years ago. The legend of Talos was born, machine sent by the Gods. Forged and Programmed by Hephaestus, gifted to Minos, son of Zeus. Ichor runs in his only one vein, Invincible creature, Eternal Domain".
Closing this track with a typical trance-influenced synth loop just sums up PreEmptive Strike 0.1. - Pioneering.
If I didn't have your attention before, I do now, and if this act never struck you before, then this simply has to.

"Bedingungslose Kapitulation" ("Unconditional Surrender") starts with a martial drum beat, a sample stating that "A New Era has begun", and then builds up to a slower paced track, again utilizing beautiful instrumentation, choir-like backing vocals, and a refrain of "Fall Back! Retreat!".

"Hubris (Infinite)" is a reworking of "Visions Of Death" from Project Rotten's "Cinema Bizarre" - I believe this was co-written originally by Cryon, and this time around it's restructured to tell the tale of Zeus, Poseidon, etc. The beautiful Greek instruments are still here, and the way the work with the sampling is genial at it's most unbridled.

There's not one second so far that hasn't given me goosebumps, and this is beauty at its most unrepentant, potent, and importantly, at it's most humbled - at no point do the duo attempt to over-exaggerate, or hype themselves up. To most people the renaissance is the most important thing to happen to the evolution of humanity. To PreEmptive Strike 0.1, it may as well have been a thunderstorm in the morning.

"Omnivorous Lurkers" enters the domain of Zoroastrianism, and even Persian mythos gets a nod - the track makes ample reference to Ahura Mazda (Light, Wisdom) - the most important deity in the above, and once again, a demonstration on how to refresh a genre is given. This is equally as trancy, melodic, and enjoyable as the finest of Dark Electro, but I've always felt that the progressions of this duo raise them head and shoulders above most of their peers.

It gets downright amazing with "Titans Awake". The track starts off with a fanfare, then starts with a beautiful female chorus, then leads into what I consider the best melody on the CD, and like the title track, features a Greek/English compilation of "lyrics" - I could write every single lyric to this album, but there's simply so so much, and each line, stanza, monologue (and even soliloquy) is painstakingly researched and delivered to the maximum effect - Blaster and Cryon do not want to simply sing songs about hostility. This is a heady collection of Greco-Roman studies, Greek mythos, everything a level-headed person would adore the chance to learn about.

Tracks 6 through to 10 feature a selection of guest musicians, the first of which is entitled "Raketenschlag" (or "Rocket Strike"). This features the talents of Flo from Phosgore, and completely turns the album on it's head. It enters the realm of TBM, the instrumentation is faded, and it's a completely different style, thus making this curiouser, and curiouser.

"Pierce Their Husk" features Shining - I can only assume this to be the Swedish Black Metal act's vocalist Niklas Kvarforth. He's quite famous in that field, and the contribution to this track isn't lost in translation. It stings like a bee with a buzzsaw for a tail, and the added edge gives the song an almost "horror-like" feel to it.

The next surprise is a fantastic cover of Slayer's "Seasons in the Abyss", and at no point did I expect a Thrash Metal song to be transformed into a fantastic Dark Electro song. The surprises just keep coming!

"The Scorcher" features unfamilar act "Raven Wings", and theres vocal passages that stick out through the mid-section that REALLY surprise me - they're half operatic, half gothic, and if there's a stone unturned on this release, it must be the body of Talos himself.

The ebbs and flows of this album seem to act like those of the waters that the guardian himself was sent to protect - this is hostile and unwelcoming but favours an introverted calmness. "Zeitgeist (Sub Specie Aeternitas") is a collaboration with Pete Crane (Shiv-R), and is a little more in the traditional vein of PreEmptive Strike 0.1 , and the album is sealed nicely with "Invisible Invaders". There aren't really any words I can conjure up to deliver the true majesty of this once-in-a-lifetime album, but if this review doesn't convince you, then I have only one thing left to discuss - Remixes.

German act "Sleepwalk" offer the first of two exclusive remixes for Metropolis, re-working "Bedingungslose Kapitulation". They give it more of a traditional EBM feel, while keeping it menacing and flamboyant. "Second Disease" remix "T.A.L.O.S.", and this is a truly interesting remix - the instruments remain, yet it's been turned into even more of a club track. What days we live in!

For the Infacted version of the release, "IC 434" remix "Hubris" - Geert's 20 years in the scene are evident here, and the project's old-school roots are noteable - in fact, this is half IC 434, half "Tales of Doom" (Geerts older project), but due to the changing scene we are part of, it's as welcome and relevant to this decade as anything else you'll hear in your local goth club.

Finally, "E-Craft" have a go at remixing "Invisible Invaders", and it's given another old-school themed shake-up.

Produced by Lunatech Sounds (who have delivered a stunning job), with beautiful artwork (userDX), and a lyrical palette as enriched as this, I strongly suspect that this is going to go on the birthday/christmas lists of the masses.

First of many candidates for 'album of the year'. Apr 22 2012
Pulseborg - 'RE:EV'
Previous article
Akrylic Spike Project - 'Protosynthesis'
Next article

We don't have any stores registered for this release. Click here to search on Google
PreEmptive Strike 0.1 - T.A.L.O.S. is available at POPONAUT from 15,95€

PreEmptive Strike 0.1 - 'Through the Astral Cold'