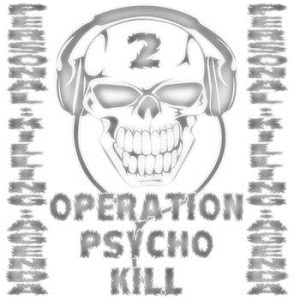 Spotify
Released off label 2014
Industrial Metal, Experimental
Alright, well, what I'm reviewing today is definitely something of an oddity. It's a multi-genre project by Shane Dunn based out of Johnson City, Tennessee, who lists horror movie soundtracks among his many influences. But, before I even get into the music, let me just go off a bit on his presentation.

NEARLY EVERYTHING THAT I'VE SEEN BY THE MAN IS TYPED OUT COMPLETELY IN CAPS LOCK, WHETHER IT'S HIS ALBUM NAMES, THE TITLE OF HIS PROJECT, OR EVEN THE DESCRIPTION HE LISTS ON HIS FACEBOOK PAGE. AND, AS YOU CAN TELL BY THIS MERE PARAGRAPH, IT FEELS AS IF I'M YELLING AT YOU AND DEMANDING YOUR ATTENTION AND THIS GETS REALLY, REALLY ANNOYING TO READ AFTER JUST A FEW WORDS. So, really, the CAPS LOCK, in my opinion, needs to stop pronto. It makes the project seem unprofessional and laughable at first sight.

Now, the artwork behind the project also needs a lot of work or help (or both) in every sense of the word. The album art for OPERATION PSYCHO KILL 2 (again, the CAPS LOCK makes a return) shows a skull with headphones on with some cheesy text art that looks like it was made out of Microsoft Word's WordArt. Also, taking a look at the project's picture on FaceBook shows the logo of the band over top a sloppily edited photo of the man lying in a coffin in front of some splatterhouse art. It just makes me cringe looking at it, and, once more, deems the project really unprofessional.

Looking beyond all that, though, we'll head to the music (I skipped over talking about the titles of the songs because they are all in CAPS LOCK once more and have pretty cliche names). Now, the intro track is pretty simple, just focusing on a fairly dark ambient style of opening. Not much of anything goes on except for a few sounds that do reminisce horror films. I do believe that it goes on for far too long for what it gives out; after two minutes or so, the material just flat lined.

The second song picks up the noisy sound I was promised. There's a shit ton of noise and raucous with an overall muddy sound to it thanks to the guitar sound in the background. I've listened to muddy music before, and enjoyed it. However, this was not a song I could enjoy all too much. I got the same feeling I got for the previous track, and that would be that I just found the material to dry out within a few minutes, but the song extended on for far too long. Also, the title, D IS FOR DEATH! is completely used up everywhere on everything.

ALTERED continued the noise. I did appreciate the sound of...Well, it sounded like a tape being wind up so fast it sort of made a squeak. I liked that noise a lot. The rest of the noise went alright, but, overall, I didn't dig the song too much.

LIFE WITHOUT SOUL had some interesting effects within it, most notably this one peculiar sound that rather reminded me of some sort of alien lurking in a sewer. That's probably (and hopefully) not where the sound came from, but it fit nicely. I'm finding the problem to be with a lot of these songs is that there is so much going on that really doesn't fit well together that it's hard to enjoy everything the songs have to offer.

BEHIND THE MASK does a decent job at reducing some of the effects to allow more sounds and music to breakthrough than before, but, even still, the noise just doesn't go too well together. The drum work, now that I can really focus on it, isn't too shabby.

STAY ALIVE actually turned out to be a half decent song. The drums were done nicely and the sounds, what I'm guessing to be work on the synths, went really well. Hell, I'll just go so far as to say that I really enjoyed this song. I was actually disappointed whenever the drums reduced themselves to allow the electronics to take more of an important role. Either way, this was a stellar song, and really kinda reminded me of something that would belong as an intro to a teenage horror movie, where the opening scene begins off at a high school.

ZOMBIE STRIPPERS was a song that I thought I'd hate just by the title of it, however, it sort of continues where STAY ALIVE left off. More powerful drum work that's able to find itself through to my ear, and the noise goes along pretty well with the song. It gives both songs a sorta punk aesthetic.

HATE FILE continues that trend, but also got a little boring. It's like I already listened to what this song presented with the previous two, and there wasn't much differing it from them. Lastly, before the remixes, the outro sends us off in a fairly creepy way with a sort of carnival-esque sound. It wasn't that great, but sure was a way to send me off.

With the remix section, there are three reworked electro-house remix songs, and one reworked to include more D'n'B. I didn't like any of the electro-house remixes, by far. They really didn't add much to the songs as it was, and sort of ruined what made them somewhat refreshing in the first place. However, the D'n'B remix of ZOMBIE STRIPPERS worked very well. I liked the D'n'B implements, and I feel as if a focus on drum work would be key in making this project better.

But, that's the end of it. Now, I don't mean to repeat myself, but I really just feel as if I should. This album isn't the best in the world by far. There are hints of talent found everywhere underneath every single capitalized word and horrible photo editing and cliche titles for horror inspired songs. I mean, I found it in certain cracks and crevices, but, overall, the bad stuck out over the good and rendered this album a bit of a wreck. Nonetheless, I wish Mr. Dunn luck with his future projects. Maybe one day I'll be rocked by one of his albums. However, that day is not today.

BandCamp
Sieben - Our Solitary Confinement is available at POPONAUT from 26,95€