INsCissorS - The Circus Of Ichneumons 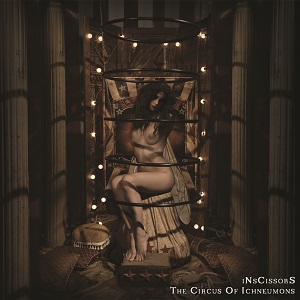 9.5
"Amazing"
N/A
Electroracle
Released 2014 by Zoharum Records
Ambient, Soundtrack
Album of the Year #25 2014
Vincent Andelmoth is nothing sheer of a musical genius in my own opinion. Whereas he can calm off as one of the most hypnotic artists with classical inspired music, he can also switch in an instant to become the main man behind a harsh EBM act and prove that he's good at providing both projects with enough love and attention to come out with art that amazes and stuns. Whether he's working on his next release for his mentally unstable alter ego Hydra Division V, or focusing on cinematic sounds for his main project INsCissorS, this man sure knows how to deliver.

And in just two days, he will be providing us with an eighteen track album from INsCissorS, providing what I consider to be another great piece of work from this man. The cover art has already taken over my desktop wallpaper; for some reason, a woman with blackened eyes and messy hair with no arms, but a seemingly beautiful body sporting a pair of wings is something to gaze upon. However, this is not unintentional; The Circus of Ichneumon is the name of the album, and I can only guess that Ichneumon is referring to the family of wasps named after it. However, unlike the deadly and often parasitic insect the album derives its name from, the music on it comes off as a benefit to all who listen to it.

Prelude (To Incubation) starts us off with a wonderful piano serenade which is later joined in by female singing. It's only at that point that the song really does reach its full potential and manages to astound me. If anything, this song proved to me that I was about to witness something incredible. To experience this before some might even be given the chance was a sheer honor.

However, while the intro was definitely seductive, the second song Nothing Moves Here - Session I went in a bit of a polar direction, offering up some creepy giggling before some static effects and piano came into play amongst some other faint noises. We are then given a voice that comes over the music, male, but in a sense so his voice doesn't get in the way of the music all too often. It was a good way to commit both legalities at the same time in good sense.

Dust & Light offered a bit more of a light session and reminded me of something that would play during the midst of a winter time dance. Or at least when someone would be exploring a castle during the winter. Whatever the case, winter was brought to my mind, and that is a delicious time of the year for me. I applaud both the music and the images in my cranium that followed.

And then the great Greek downfall of any tragic figure came next: Hubris. However, this song was not a fatal flaw that did in the album in any sense. The chimes and instrumentation present within this song were all spectacular when thrown together, and I do not have a single complaint to throw at this track whatsoever. The vocals that were present just added onto the magic and created a chilling sensation down my spine.

Ate & Litae continues with more Greek themes, as the spirit Ate was full of folly and led men to their demise, while Litae were the daughters of Zeus who picked up and followed the path laid out by the reckless one. And, the music played perfectly pitches that. While starting off a little calm but frantic, it slowly leads up to a point where everything just gets loud and unexpected. It's like Ate was building up her frenetic antics before the Litae had to clean up her mess.

Interlude I - The Ichneumon Queen's Chamber did well in slowing down the pace of the album for a minute and a half. It led to the fairly slower song Nothing Moves Here - Session II which continued the vocals from the first session. While I didn't appreciate the music as much as I did in the previous section, it still worked well as the vocals took more of a stand this time than last.

I'm none to sure what happened to SideShow Music I, as it's not present on this album, nor could I find the first one anywhere on any of the albums on his BandCamp site, however, we are delivered Sideshow Music II - The Hominoid Helminth and SideShow Music III - Inside The Circus Of Ichneumons. The second has a sort of mischievous tone to it as it wallows down its way, and while the third picks up on that pace, it also has a darker tone. The instruments sound oddly toyed with and the whispering in the background does not beckon well for any that come near. Nonetheless, it was lovely to get through this thrill ride.

The lengthy titled Small Quiet Music &The Old Sleeping Manor comes in next, and the violin work mixed with the xylophone sounds did quite well along with the standard piano work I've come to love off of this album. About half way through the song, right after all goes quiet, we're given more female vocals to work us over nicely. The result left me astounded and in tune with peace.

Continuing on in what's shaping to be a stellar album as I type this and listen to the music, Interlude II - Helminth calms crawling to my ears. And I loved it. Although the sounds have all been heard on the album before, it still doesn't cease to amuse me. Plus, worked differently, the sound is still new to me.

Coming off with more of a film noir inspired sound than anything I've heard on an album before, Nothing Moves Here - Session III would suit well in a steamy detective movie involving a femme fatale getting shot and killed; visits to strip clubs and wild affairs are permitted within this film. However, I loved this tune quite a bit.

The Carrion Symposium threw at me something completely different from all else on the album. Very noisy, with the vocals coming off like a ritual like chant with a bit of a chorus effect, it was awesome. That, paired with the almost opera like voice in the back as the chant went on, it was awesome. Then we got a bit more chanting that's liken to be found within a church sequence, with more eerie noise backing this all, it was just a track you really need to experience; it was a moving event for myself.

As hard as it was to let go of the last song and continue, I forced myself to do so. Nemesis turned to me this time, and the menacing tone of the song fit the title well. This song just prepped you for a gigantic and glorious battle with whatever a protagonist may be facing off against. Whether you're about to fist fight someone on the street, try to brush out all the knots of your unwashed hair, or simply enter the dirtiest public restroom in the world, this is the song of all songs to prepare you for those moments.

Final Interlude - SideShow Music III (Reprise) made me sad; not because it was bad or anything of the sort, but because it marked that the end of the album was coming all too soon. However, by this time, the sounds and music present wasn't anything new; it was good, but just seemed as a bit of a repetition in comparison to the rest of the competing tracks.

Nothing Moves Here (The Voices Made Me Do It Version) sounded as if a demon was trying to coarse one to do a filthy deed with the whispering and creepy vocals. The noise in the background, while not too comprehensible as something one would consider to be music, it was sure nice to listen to in an odd sense.

And while I thought that Nothing Moves Here - Session IV would provide with nothing but what I've heard once more, I was proven wrong. Throwing in a bit of a tribal vibe to the song, it came out nicely. Perhaps not my favorite song on the album, but it was certainly nothing to cry about.

And the last song, which just has a ? as its name perhaps came off as the album's most emotional. The light hearted tone of the song really hit deep, and also slammed well considering it was the final song on the album, sending you on your way from this blissful journey, even though you don't want to.

Now, this was perhaps one of the best listening pleasures I've had all year long. Creating soothing and awesome beats makes way for a path of righteousness that cannot be compared to many other albums. This circus, which not only consisted of Mr. Andelmoth himself, but a slew of guest appearances (Maciej "Dragos" Mehring, Evor Ameisie, Michiel Spape, Annamaria Bernadette Christian). And, these guys put on the three ring show of a lifetime. I can sincerely hope that something as magical as this will one day come across my ears and let me feast upon it once more; just like one of my other ratings I gave to an INsCissorS album, this one is just about perfect and once more has my jaw agape and my mind pacing back and forth. I once more applaud each and every single artist that was a part of this project; I would love to see what they're all capable of doing on their own at some point in my life.
# inscissors
# zoharum-records
# cinematic-ambient
# ambient
Apr 24 2014
Rafal Kolacki - 'Panoptikon'
Previous article
Insane Records to release next Sleetgrout album
Next article

BandCamp
Uncreated - Eternal is available at POPONAUT from 12,95€

INsCissorS - 'Mnemosyne & The Structure of Time'