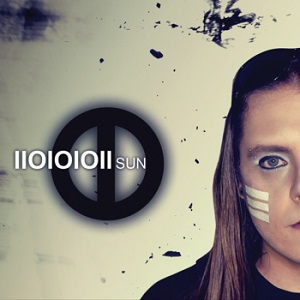 9.5
"Amazing"
N/A
Electroracle
Released 2013 by Juggernaut Music Group
Ambient, Industrial
Album of the Month November 2013 Album of the Year #3 2013
It's been near a month since I reviewed IIOIOIOII's Rising Sky/ Stardust, but in the month since that EP, I have been sitting here and craving Sun, which is the album that the EP teased so hard. And, finally, I have gathered it straight into my hands, devoured it three times over by now, and have found myself loving every bit of this album.

It really does sing out like a love letter to the 80s; I said this during my review of Rising Sky/ Stardust, but it's just so true. I absolutely adore the sounds and synth lines perpetrating every song on this album. But, enough of this, and let's get into the music. By far and wide one of the artist's best songs, Rising Sky starts off the album and travels us onward into a cacophony of pleasure.

The song is really just incredible. I already talked about it during the review of the EP, but I really just cannot strain just how beautiful this song comes out. Most artists, especially with their first releases, struggle a bit finding their vocal chords, but IO knows where he should be, where he's going, and why. Everything is perfectly strung together, from the bass, to the synths, to the almost night time like music you would fin yourself listening to as you stared at the stars above and got lost.

The second song on the album, Weapon, adds in a lot more electronics and is faster in comparison to the start of the album. The vocals have a slight digital effect to them, but the real attraction within this song is the background synth line that drives the song to bliss.

Stardust was another song that originally appeared on the EP, but it still holds up very well on its own. The chimes work very well in this song, and is very soothing. Even if you've already listened to the EP, it would never harm you to listen to this song once more.

Now, Do You Know switches up the vocals from the previous songs which makes it really stick out. Instead of the regular and quite handsome chords we are used to dealing with, we are given a whispering, slightly growling voice. However, it also switches out with a more digitalized voice. And, the song is hypnotizing after a while, which basically means it's amazing.

Coming in halfway into the album is Falling, which is definitely dance friendly compared to most of the other tracks on the album. It fun, fast paced, and has a catchy tune. The electronic work in this song is also superb, and I am finding myself falling in love with the album all over again as I listen through this.

Spotlight begins off fairly slow, but continues to be a slow song throughout. When the vocals kick in, it just becomes that much better. There's just something amazing about the vocal talent within IIOIOIOII that makes me throb.

We're Still Alive continues off where Falling began, with a much more dance friendly tune. Compared to most of the other songs on the album, this one sounds a bit standard. However, the vocal talent is still amazing, and the beats are good. I mean, this is like comparing gold against gold; there may be a slight dent in it, but, no matter what, it's still gold.

New Sedations, for me, really showcased the drum and bass that the artist can bring out. It was awesome listening to it, and, once again, there's a renewed energy in the album. Each song delivers one way or the other, and that's what's keeping me hooked all the way through.

Second to last on the album is Echo, and it just hit me just as all the other songs did. I find nothing to complain about this one; this is simply the solo artist doing what he does best. And he does it so well.

And, as the final track that's appropriately titled Goodbye, we are hit with a slower song. However, the chorus in the song is absolutely fantastic, with the vocals and synth work really complimenting each other. And, I find myself in remorse knowing that this is the end of the album.

However, added onto the album are five more songs; remixes by five very talented artists. For the first remix, Dreams Divide remixed Stardust. It seems a bit stripped down in comparison to the original, focusing less on bass and more on electronics. However, the vocals are able to stand out a lot more because of this mixing, and I enjoyed it.

A personal favorite of mine, Revenant Cult, did a remix of Spotlight. And, as expected, the mix turned out terrific. The beat is kicked up, the bass is much more present, and it all fits very well together. The vocals do sound a bit muffed, but the song still manages to remain fantastic. And there's even some light humming added into the song that makes it so much more magical.

The third remix on the album comes from Art Deko who mixed Rising Sky. As I absolutely adored the original version, the remix does something fantastic with the beat. It was an honor to listen to, however, the vocals do seem off from the beat. That does not make it bad at all. Plus, there's a sample or two thrown into the song, and it works wonders.

Spotlight is once again remixed, only this time by Garten der Asche. It keeps the slow tempo of the song, and plays around a lot with the synths to make a very emotional impacting sound. If anything, the beat alone was worth listening to.

And, finally, we come to the last of the remixes, this time by Machinista. This is definitely my favorite of the remixes. I think it could've done without the few dubstep influences within the song. It's not that I hate dubstep, it's just that I think it threw off the rest of the sooth sounding remix. But, it still flowed together extremely well, and was really, really good.

Now, if you couldn't tell by the amount I talked about this album, I really, really enjoyed it. IIOIOIOII seem to have come out of nowhere and just shook the floor beneath me shocking me with this release. I mean, within just a month, there has been much buzz going around about the solo project and the man behind it, Christopher Gurney, but there's damn good reason for that. The artist is amazing, and with Sun being released as soon as December, you better put some of your holiday money aside and place an order for this album. The winter is cold, but Sun will be there to warm your heart and your soul for as long as you need it.
# iioioioii
# juggernaut-media-group
# sun
Nov 04 2013
Lights Out, God Help Me - 'Nemesis'
Previous article
Seraphim System releases 'Excessive Force'
Next article

Juggernaut Music Group
IIOIOIOII - Sun is available at POPONAUT from 11,95€