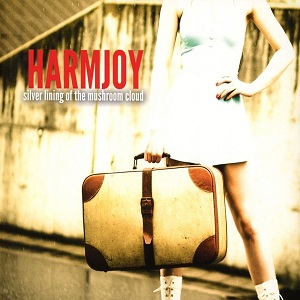 Spotify
Released 2014 by 73 Seconds Bismarck
Futurepop, EBM
Silver Lining of the Mushroom Cloud, the debut album by German-American electro-synth duo Harm Joy, is a slippery beast. If I had to describe it in one word, I would probably choose "insidious." The first time I heard it, it struck me as a well-made, but basically standard futurepop album. No single song grabbed me right away, or so I thought. I worried whether I could do it justice in reviewing it, so I decided to listen to it several times before forming an opinion or writing anything. Before I got around to the second listen, however, I realized that two songs, "The Quiet" and "Pain Decay," had burrowed into my brain when I wasn't paying attention, and then refused to leave. After the second listen, I further realized that the two songs I had initially found the catchiest weren't even my favorite tracks on the album--that honor goes to "We Keep Circling (BZ Edit)" and "My Tears Fall." In retrospect, it's hard to imagine why I was so blase at first about this release. Sometimes music needs time to percolate, so if you're not already a big futurepop fan, do give Silver Lining of the Mushroom Cloud time to work its way into your system. Once it sinks its claws in, it doesn't let go easily.

Comprised of Olaf A. Reimers, the composer behind the German EBM band Tyske Ludder, and Dan van Hoyel, singer of the Swedish synthpop group TITANS, Harm Joy has posted a manifesto on its official site, describing itself as "[t]he embodiment of Schadenfreude... deliver[ing] discomfort in the midst of pleasure." The duo revels in contradictions, utilizing mostly upbeat, retro 90s-sounding music paired with disconcerting lyrics steeped in Cold War imagery. The manifesto states: "We resurrect the nostalgic, not to make you feel good but to feel what nostalgia really means: in Greek, the pain from an old wound. It has been said that nostalgia is the art of forgetting how bad things really used to be. We of Harm Joy are here to remind you." Reimers and van Hoyel accomplish this by floating apocalyptic metaphors across a sea of trance melodies as they gird themselves in their videos in gas masks and military uniforms. Of course, these totalitarian accoutrements are as much genre cliches as are scantily clad women in PVC hot pants, but by the time van Hoyel props up his feet on the back of a hog-tied woman in an underground bunker in Harm Joy's third video, "Pain Decay," the music has long since begun to work its magic, and genre cliches now seem largely beside the point.

The album begins with a short, beatific, choirlike instrumental intro called "Manifesto." Although it's hardly indicative of the sound of the rest of the album, this little slice of aural bliss would be almost perfect, except for the fact that a voice intrudes at the end, reciting from the manifesto: "Harm Joy forces thoughts in order to free your mind. Listen." At first, I resented the intrusion. I wanted to zone out to the pretty sounds, but some self-help guru had sneaked into the recording studio and figuratively smacked me awake. Upon reflection, it's obvious that Harm Joy intended the message to be disruptive, but I still wish they would release an extended version of this piece, minus the helpful voice-over.

The second track, "The Quiet," begins slowly and moves firmly into futurepop territory. Van Hoyel's distinctive voice is a smooth, rich croon that intones: "Know what's true is rarely spoken. It always remains unsaid. The most to fear is not emotion, but silence inside your head. Those who are most quiet are most eloquent. The things that can't be heard are the most relevant."

By the third song, "Inside Out (Album Edit)," there will be a rave going on inside your head. Much to my dismay, my personal head rave was rudely interrupted by Hal Douglas saying: "But when a stranger makes him an offer it will turn his world inside out... inside out... inside out..." At first, I wasn't sure whether that was actually part of the song, or if there was another window open on my computer, playing a movie trailer in the background. For listeners and readers under a certain age, who might not recognize the voice, Hal Douglas was an iconic voice actor who narrated virtually every single movie trailer made in the 80s and 90s. His voice was inescapable. Its presence in "Inside Out" lends the song an unabashedly retro vibe, but it also invites the absurd image of club kiddies dancing to a movie trailer, twirling their glow sticks as Douglas says something over-dramatic like: "In a world gone mad, the only way to stay sane..." The video version of the song, which most likely comes from the Inside Out EP, places the Hal Douglas interlude at the beginning of the song, where it's less distracting, and I prefer that version to the album edit.

The fourth track, "My Tears Fall," opens with a high-pitched, steadily escalating synth line and a man whispering something incomprehensible. Hold onto your knickers here because between 2:51 and 3:06, the song launches itself into the sonic stratosphere, and will take you with it, promising auditory orgasms all the way up.

I don't know what I could say about "Pain Decay (Album Edit)" other than "Good luck getting this song out of your head," so I'll move quickly along to the album's outlier, "Submarine." More trip-hop than trance, this song is the most stylistically different from the others, and has a murky quality that makes it sound like it was recorded underwater. Wallowing in depression and paranoia, van Hoyel sings, "I'm on a submarine in a sea of misery. Crash dive. Crash dive. I surface occasionally to see who's following me." This is the only actually somber-sounding song on the album, and although I like it a lot, its placement in the middle of the album results in the album feeling uneven, because I don't care much for the next song, "We Can Pass." It's not bad, but I can pass, too.

That brings us to the harder-edged EBM track, "Whispers & Rumors (Album Edit)," which picks up the album's flow again with dance-friendly beats. Then we reach the album's second major high point, the almost painfully beautiful "We Keep Circling (BZ Edit)," which is the most consistently great from start to finish and the most interesting sound-wise. "First Person Shooter" is another EBM-tinged track, which is, I'm sorry to say, rather forgettable. The next song, "Your Best Weapon," starts out sounding a little generic until the insanely catchy chorus, in which van Hoyel sings: "Like a lion that lies in wait, like a slave shows defiance, like an assassin behind the gate, your best weapon is silence." There are some dubstep elements in here, followed by an abrupt ending. The album closes with Rotersand's remix of "The Quiet," which makes me think Krischan Jan-Eric Wesenberg must be a huge fan of 1980s horror soundtracks because the tinkling overlay he adds reminds me so much of Tim Krog's score for Ulli Lommel's 1980 film, "The Boogeyman," and the computerized part in the middle sounds a lot like Chuck Cirino's theme song for Jim Wynorski's 1986 movie, "Chopping Mall."

Overall, I give this album an 8.5. The strongest songs might even qualify for a 9, but since the album feels uneven in its second half, I can't go quite that high. I did, however, wind up enjoying Silver Lining of the Mushroom Cloud more than I initially thought I would, and, with the exception of two songs, I grow fonder of it with each listen. I'll be keeping an ear out for more Harm Joy in the future.
# harm-joy
# silver-lining-of-the-mushroom-cloud
# futurepop
# ebm
# 73-seconds-bismarck
Dec 24 2014
Interview with Bounce House
Previous article
Alan Woxx - 'Bloodrain'
Next article

Zeromancer - 'The Death of Romance'

Daybehavior - 'It's a Game'