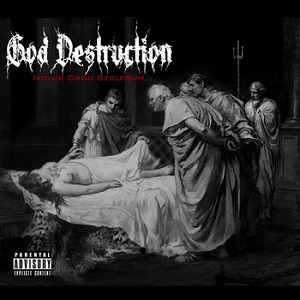 Spotify
Released 2014 by Juggernaut Music Group
Harsh EBM, Black Metal
Album of the Year #12 2014
It's a miracle when an unknown project of unknown origin can come out of the blue and shock audiences with such a powerful album that uses a worn theme that so many bands before have brought out in the past. However, God Destruction did just that with his 2012 debut album, Illuminatus. The splitting harsh electro influenced with black metal tinges offered an amazing debut for this project, with multiple netzines counting it as an album of the year.

Two years later, God Destruction is back in full force with his more evil than thou art attitude, slamming out twelve tracks that romantically dance to the Devil's tune. This time around, black metal is brought forth more so than the previous album, and is rock solid as always. Not only that, but heavy hitting bands such as Esquizofrenia Viral and Alien Vampires come out from their dungeons to add a little remix spice to the song, Regresus Diaboli while C-Lekktor spews a serpent tongue onto Touched By Lvcifer.

And, to start off this unholy writ, we're given New World Order. As the female chords come into play to form a sort of evil sounding ritual aesthetic, a beat slowly pours in behind the vocals. After a bit, an organ comes in for a quick half minute before electronics mark the beginning of the Imperor's trademark sound. The vocals still are distorted and raging, but they do sound more crisp and clear compared to the previous effort, which is well granted.

I'm Your God comes in second with creepy piano music accompanied by little electronics. This leads into a guitar wrenching, and dark electronic beat that breaks out around the minute mark. More robotic, digitalized vocals are found within the song along with the standard aggressive screaming that we've all come to know and love.

Perhaps more heavy on guitars and drums than any single previous song in the past, Bellum introduces us to a new sound from this demon. There's a sort of growl accompanying the song that sounds like a hound from hell. The choral samples used within the song are absolutely amazing and fit perfectly.

Continuing on, Disintegrator reinforces the idea that this man just loves his cinematic openings to his songs. Using what sounds like a little girl faded in the background along with chanting and some dark ambient hints, the introduction was superb. Faster than the other songs, the Imperor spits out his Satanic gospel just as fast as the beat hits. Not only that, but this song also offers a different style of chords that aren't as distorted as normal, rendering a more humane voice. It was really awesome to see him change up the dynamics with his vocals.

The fifth song Anger With The Scabbed Wings begins off with a speech from the series True Blood, with such sayings as, "Put Christ on the cross / You don't have to be spiritually raped / You don't have to be seduced." Not only that, but this song is a cover of Manson's song of the same name. If it isn't, then I'll be shocked, because it shares a shit ton of similarities with it.

Prominent Darkness came up next as the halfway mark on the album. Serving in another electronic centric opening to the song, it unleashed its ferocity with more driven guitar work and hard hitting beats. Chilling down and moving slower once more, this definitely sounds like it belongs within the rest of this evil indoctrination.

Another sample ridden introduction focuses on a quote from Malcolm McDowell's portrayal of Satan from the movie Suing The Devil welcomes Destroyer. It breaks from there into a slow moving instrumental despite their being a few screams here and there. The whole package comes into play, my favorite moment coming with the organ play around the two minute and fifty second mark.

Eight tracks into this evil storm plays out more tunes that would make your average Jehovah's witness cry and run from your door without knocking twice. Satan's Storm, while still toying with sounds that have been used before, manages to manipulate them in a sense that allows a new song to be found.

Almost completely annihilating all electronic work in favor for black metal guitars and drums, Revolution is perhaps the most refreshing song on the album. While not much changes with the vocals, the music itself revels in classical instrumentation and chaos, and the metal moves and grooves. Though, it is worth mentioning that there's an organ breakdown near the end, and some electronics do take a step over the metal influences before sending us out on a metalhead rampage.

Touched By Lvcifer begins off with minimal electronics before falling into the standard fare that God Destruction welcomes. While most of it doesn't sound all that great in the grand scheme, certain touches help move it along, such as the Church bell that rings every so often. Also, the synth work offers a touching effect here and there.

The second to last song, Doomsday puts in more guitars to open the song with a grim sound that really does make you feel as if the end of days is being brought before your very eyes...Or ears. The vocals differ once more in this song, offering up slower, a little less distorted vocals save for lighter, more digitally enhanced vox.

And, as the final song before the remix set, Regresus Diaboli sends us off in a fantastic manner. Though I don't have much to say about this song, my thoughts are summed up in the same manner as I described Touched By Lvcifer. More similar sounds, however, they are definitely just changed in manners that let this song stand on its own.

Now, we get into the remixes. And I don't think there could have been a better way to start of this section than by showing off the awesome work C-Lekktor input to Touched By Lvcifer. The synth work during the chorus is absolutely admirable, and the beat does take a more electronic approach. It's hard to pick which version I liked more than the other, but they're both fantastic in so many words.

Esquizofrenia Viral and Alien Vampires took on the inferno that Regresus Diaboli had to offer and infused more hate into it. Esquizofrenia's remix offered a faster pace with less of an impact on the bass. Though I thought that this one wasn't as good as the original, it still managed to leave its mark on me. Then, the Alien Vampires came and absolutely demolished the song in a good way. Showing off a bit of a rhythmic noise side to the usual harsh EBM band was odd, but it worked extremely well. It was chaotic, it was fun to listen to, and it was definitely different.

And, finally, I'm able to step back out into the light of the world after taking a long and enjoyable stroll through the depths of Hell. The Imperor made sure to violently impact every sensation of the human body, emotionally and spiritually, while seducing us all with downright dirty beats and an indoctrination process that absolutely will tear you to pieces. Though it may have been hard to follow up such an album as Illuminatus, this solo man proved that he cannot only make a great album once, but he can do it twice without breaking a sweat. Novus Ordo Seclorum is out today. There's only one question remaining, however: What's stopping you from getting your copy?
# alien-vampires
# black-metal
# harsh-ebm
# c-lekktor
# esquizofrenia-viral
# god-destruction
# novus-ordo-seclorum
May 31 2014
Dreams Divide - 'Trashed (Single)'
Previous article
Einheit, Esch & Mur - 'TERRE HAUTE'
Next article

BandCamp
God Destruction - Redentor is available at POPONAUT from 13,45€