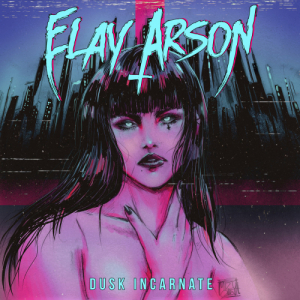 If you're not quite familiar with Elay Arson by now then you've missed me geeking out about them in the past; from their wicked production with "Rites of the Damned" to "SPIRIT | DEATH" and now with their new album "Dusk Incarnate" it's near impossible to get me to shut up about them. Everyone loves synthwave and cyberpunk these days and more and more acts are jumping on the bandwagon attempting to fuse elements of the retro-electro movement into their own music. They want to dip their chips into the pool of eager science-fiction crazed fans who want concept albums stacked upon wondrous beats. Alas, these projects often fail to capture either the essence or the flavor of synthwave as a whole and rather than embracing the movement they use it as a tool to gain fans and traction within the media. For these reasons and many more is why I appreciate artists like Elay Arson who are not false in their outings but true to the electronic element.

After that rant if you're expecting me to say that "Dusk Incarnate" is a good album then you're quite wrong - it's not just good, it's great. I will not sit here and say that this is the definitive Elay Arson experience because that could be argued with any album they released since their inception with "Bloodbath" - by the way, guys, please reprint that and "Rites of the Damned" and make sure I get dibs on ordering the first copies as I would love to fill those holes in my Elay Arson collection. I will say that this is another stellar work in their discography that lives up to what I've come to expect of Elay Arson.

What makes "Dusk Incarnate" different from the rest of their albums so far are the amount of collaboration efforts on the album. You could say that my mouth began to drip copious amounts of saliva as I went through the various other musicians who made an appearance on this album just based off of name alone; Facexhugger, Megan McDuffee, and The Encounter are all projects whom I remember encountering on my headphones before. Facexhugger meets with Elay Arson for a slower, synth heavy feeder of beautiful metal on 'EMP Blast' and The Encounter gives off a sinister darksynth standoff with Elay Arson on 'Switchblades'. What was perhaps more shocking to me was just how well Megan McDuffee's vocals fit on the single 'Killer Intent'. I am used to hearing her voice on catchy retro-synthpop songs and was not sure how Elay Arson would fit her into their repertoire. The answer to that was a middle ground of funk-inspired beats, grim backing guitars, and a wonderful balance between McDuffee's attractive voice and Elay Arson's mastery of synthmetal. Well done; in a perfect world we'd see these two go on tour together finishing their shows with this collaboration track.

But just because those are the names I've heard does not strike down the other collaborators on "Dusk Incarnate". Occam's Laser was featured on the track 'Barely Holding On' which shoots out after the cinematic and introductory track 'Code Name Dusk Incarnate'; it's a wonderfully sinister song. "Highway Machine Gun Fight" featuring Wickline - the title says it all. It slams down for the entire ride and doesn't let go; the pedal is pushed down and you're flying over 200MPH on a mega highway of the future. 'Overloaded' featuring Dredd is a hard song on its own with gorgeous guitar riffs speeding out over a melody of anarchic synth work. The last collaboration on the album is 'Laser Castle' featuring Nova and the Ghost. This is another pleasant surprise; while not as bombastic as the Megan McDuffee led 'Killer Intent', this song comes off as a smooth electrorock song with calm, confident, and powerful vocals taking center stage. It's inspiring and the spirit is phenomenal; I tip my hat to both Elay Arson and Nova and the Ghost.

All this talk of collaboration aside, though, Elay Arson still knows how to make a killer song without the need for intervention from anyone else. 'Cocaine Nightmare' is an interesting play on the drug as it begins off with lighter synths as if the protagonist is riding high; after the two minute mark, however, the song takes a darker twist and all goes downhill. 'Irridescent Monster' is a straight synthmetal hit and 'So Called Cultured People' takes a step back to blend some rhythmic, almost techno-like elements into Elay Arson's digital playground. The final song on the album 'Classified Debriefing' is probably the riffiest, roughest, and darkest song on the album with deep tunes and equally squashed electro bits to fit. Well done all around.

I would also like to take a moment to talk about the physical product Elay Arson is putting out for this album. As per normal, the physical product never increases or decreases the score but I do like to touch on it. Elay Arson went all out for "Dusk Incarnate". If you haven't noticed by now either from checking them out yourselves or by reading above about how I need to add "Bloodbath" to my collection, Elay Arson's material tends to sell out fast. Released in limited quantities, "Dusk Incarnate" has had four of the physical editions sell out already including two different cassette versions, one CD version, and a vinyl version with another CD version close to selling out with only five copies remaining at the time of this writing. Lucky for you, however, there are still two different vinyl versions available for purchase. I'm not one to usually buy multiple formats of a product but I love this band and I love this album so I went and bought five of the seven different formats the album released on. I've already got two sitting on my desk and they're great; grab a vinyl fast before those sell out as well.

And to end off this review...Well, I've said everything I've needed to say in the paragraphs above and probably more. Listen to it. Buy it. Support the project. End.

Elay Arson - 'Rites of the Damned'