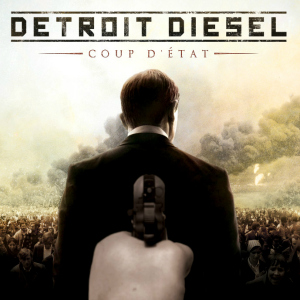 8.5
"Great"
N/A
Electroracle
Released 2012 by DWA
Aggrotech, Harsh EBM
Although this album is also released through Infacted Recordings, I will be forming this review on the Deathwatch Asia copy of 'Coup D'Etat'.

The line between a great act and a very good act doesn't always lie solely with music. Indeed, the best artists will learn when change is necessary, and will never re-use a gimmick. This is the first sign that Detroit Diesel are the real deal, and they've delivered the change with all the correct subtleties.

The World War 1 theme is gone, and the harsh EBM / Wartime sounds have been altered; with Coup D'Etat, Detroit Diesel (as the name indicates) are dedicating this CD to the recent uprisings, and the theme is Revolution, Freedom, and Liberation. In turn, the Harsh EBM sounds are toned down (yet still noticeably present), and the album leans very heavily towards Techno and Club.

Opener 'Crash And Burn' makes this blatant with it's heaving bass, powerful techno rhythm, and melodies which at times, remind me of 'Insomnia"-Era Faithless.

It's met towards the end with a lengthy and powerful sample about dictators, how they lie and steal to make themselves more powerful, and acts as a rally to revolution, making the track placement very clever indeed.

'Let's Pretend' has more of a traditional EBM/Dark Electro feel to it, it contains a sample (something Detroit Diesel are good at doing sparingly, and powerfully), and is much more akin to the band's previous work, cementing their talents as musicians of multiple styles. It's one of the tracks I'd recommend to break people into Coup D'Etat.

I was told before I received this album that it's much more 'poppy', and not to expect anything like the earlier work, but honestly, I don't see the big concern. Why would any supporter of an act deny them evolution?
The material here is more hook-laden, more melodic at times, but has less of the war-time sounds and intros that we got from 'All Last Before Dawn', 'Normandy', 'Ruins', et al.

Coincidentally, 'Just Like Falling' has an intro much close to 'Terre Humaine' and just like 'End of Days' did on the 2xCD re-release 'Terre Inhumaine', Deadbilly and Greta have proven that as they progress, partied with one of the strongest production teams out there, there is no boundaries to their sound - Bass has hit a new level, vocals are as coherent as they can be allowed to be, and everything just pushes the right button - it's like they've put the 'Evolution' in 'Revolution'.

The next change is the addition of guest musicians, 'Dance of the Dead' features the talents of Scott Fox from 'Ivardensphere', and is another blast of Heavy Techno fused with Chaotic Industrial, and absolutely vitally, they've managed to fuse a difficult concept into a scene that often suffers from restrictions, to make high-octane music that makes you THINK. This album could have been the soundtrack to the uprisings in Libya, Egypt, Syria, Tunisia, etc, and even the London Riots.

I've always considered it an attractive talent to use your music to talk about relevant topics, and important issues, and this is where Detroit Diesel step confidently over the 'line' - in an age where people want to dance to simple lyrics and forget everything, the act have managed to make excellent club music, with samples and ideas that remind every one of us how lucky we have it in the Western world.

The allure of writing a track-by-track for this release is at it's strongest here, and as the anthemic, 'fanfare-esque' 'Black Flag' builds up to it's crescendo, there's very few words I can really use that haven't already been written.

'Never Looking Back' and 'Speak No Evil' flirt with the experimental, progressive side of Detroit Diesel, 'Isolation' and 'Under Fire' suggest the horrible realities of being on the losing side, and 'The Playground' features the vocals of Dracos from FGFC820 (no other act could be more appropriate for this release), before rounding off the original tracks with the tragically accurate 'War Never Changes'.
Detroit Diesel almost suggest that we are on a roundabout, forced to watch history repeat itself - deliciously ironic considering that the preceding track is entitled 'The Playground'.

After these whopping 11 tracks (which I can honestly say could shape up to form a better release then 'Terre Humaine', We're treated to the closing trilogy of Disc 1 - Grendel deliver a remix of 'Let's Pretend' which absolutely thumps the original into submission with its huge sound, 'Terrolokaust' pull off a massive surprise with their interpretation of 'Speak No Evil' - making the track sound completely different, but proves itself much more playful and intense. The remixes are rounded up by the returning CeDigest, covering 'War Never Changes', and for anyone familiar with Jay Ruin's brutal act, there's no compromise here, as 'Jay Never Changes', making the choice of song apt.

This almost gives the original disc a 'second life', as it were, as if anyone was to dislike the newer style (although god knows why), it takes 4 of the tracks and makes them far more accessible to the club crowd, without stripping anything essential.

In my opinion, the reworking of 'Crash and Burn' is hit most noticeably by this, and there's just no way that any competent DJ will fail to put this on Heavy Rotation. Complimenting these excellent club mixes comes another short series of remixes, starting with XP8's interpretation of 'Crash And Burn', which I can honestly say is the best remix XP8 have done yet.

Everyone has the same feeling about war, but if you asked for a definition, each opinion would vary - this is why the remixes work so well on this release, the passion on each is so strong I can almost feel it. Hell, Studio-X even make a Hardstyle mix of 'Dance of the Dead', leaving no stone unturned on this album. You want TBM? It's covered by S.A.M.'s remix of 'Under Fire', and Elliott Berlin (best known as a live keyboardist for Aesthetic Perfection) has delivered his 2nd jaw-dropping remix in 3 months, tampering with 'Speak No Evil'.

I'll give a mention to the 3 exclusive Infacted Remixes (as I'll be trying to buy both versions, and I'm sure many others of you will), and that copy of this album comes with these 3 remixes :

This is, however, a review of the Deathwatch Asia version, and in closing, I have to express my genuine surprise. After reviewing 'Terre Humaine', I made it quite clear to myself that I wouldn't expect this to be as good, but it's (perhaps in many ways), an essential transition for a band that could quite frankly, shit good songs with minimal effort. Due to all the points raised during this review, and the simple relevance of everything Deadbilly and Greta are doing, I cannot score this anything lower than the highest possible, as it's still so unique, talented, and fresh.

Finally, how awesome is the cover art?

We don't have any stores registered for this release. Click here to search on Google
Detroit Diesel - Coup D'Etat is available at POPONAUT from 13,95€

Ludovico Technique - 'We Came To Wreck Everything'

Ludovico Technique - 'Some Things Are Beyond Therapy'