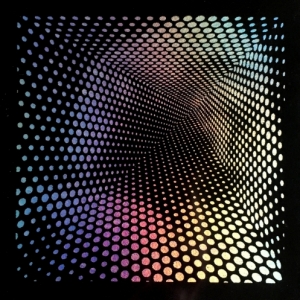 
Pinning down Crystal Cage into an exact genre is an exercise in futility that will lead to nowhere and nothingness; the producer's sound range and influences range from the strange and unusual with experimental heavy synths to classic sounds focused within the witch house scene. Dark ambient textures pilfer the pores of this project as silent noise seeps through the cracks of what has already been established. The many news articles I have posted about Crystal Cage since their inception in 2018 with their self-titled release will testify to that; I've labeled them heavy synth, cinematic, cyberpunk, dense electronic, gothic, and minimalist. All of these titles fit Crystal Cage but I think there's one universal truth that needs to be stated here and now about the project: in order to understand what they do you need to put on headphones, close your eyes, and transport yourself to the outer vastness of space.

Crystal Cage's influences can be stated to be cinematic (as stated above) due to their love of all things science fiction. Their self-titled release has Robocop featured on the cover art while one of their latest singles, 'Little Giants', features a still image from 2001: A Space Odyssey. These science fiction roots are phenomenal and well represented in Crystal Cage's works, but their fascination with the near future does not stop there; the view of the city from their EP "II" further confirms Crystal Cage's fascination with the nearing cyberpunk and dystopian prospect.

But perhaps it is Crystal Cage's attention to detail and excellent electronic music that has led the project to get a very special release from French record label Anywave. The release, combining the previously mentioned "II", its follow up "III", a collaboration EP with death of codes titled "Romantiek Aan Het Einde Van De Wereld", and a collaboration with Somniare of AVASU titled "Deimos / Daedalia", came out at the tail end of last year. Though I swore to myself I would not be covering anything from last year, I was in the midst of writing this review between 2019 and 2020 and I'll be damned if my time and words go to waste. Plus, Crystal Cage makes gorgeous music and the package is stunning so it deserves mention.

The physical copy that I purchased comes with two cassettes, with each release divided onto its own side of one cassette tape. Both cassettes fit within one supersized shell featuring glossy cover art, a tracklist, as well as a bonus digital code to download the entirety of the album (but since I purchased that album on Bandcamp, I suppose this code is moot). It's also housed in a plastic sleeve. This is great for people like me who enjoy to keep their collections in as good a shape as possible. Now, that's just the physical side; as they say, it is what is on the inside that counts. And what is on the inside is an experience which simply cannot be forgotten. 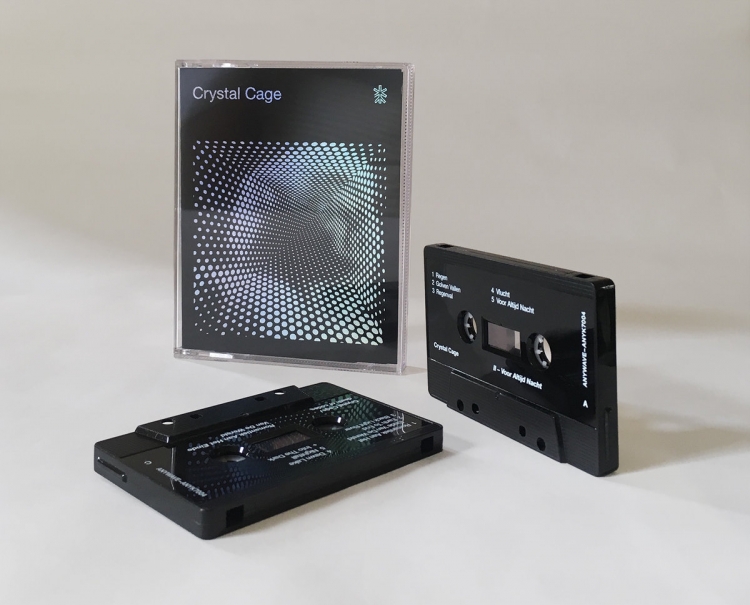 This collection of works starts with Crystal Cage's second EP "II". The best way I can describe these songs is as a mix of dark ambient music meeting suspenseful science fiction nodes. On my first listen it was as if I were witnessing some extravagant event; the launch of a new class of space ship; the first contact of a new species; a hacker jacking into a terminal and uncovering a nefarious plot of a mega-corporation, or even the destruction of a civilization. To me, the beauty of these songs (especially 'Golven Vallen' and 'Voor Altijd Nacht') is that they inspire creation and exploration. The only song that I was not particularly fond of was 'Vlucht', which in comparison to the other songs on "II" sounded like a standard dark ambient and noise track. It is very well produced; it is just a disappointment.

"III" kicks off on the B-side and rather than attempting to stay quiet, Crystal Cage launched into a bright and beautiful orchestra of heavy synths and digitally altered vocals. I feel as if some kind of story is meant to be told just from the titled of the first song 'Aisha's Soul In Decay', alas it is lost on me. This EP is also where we get our first taste of what both death of codes and Crystal Cage can do together; 'Venus Pyre' and 'Phosphorus Betrayed' both feature the project and once again it sounds heavenly. Every single song under Crystal Cage's output, as stated before, sounds less like a song and more like a moment of time frozen through the sound of music. It's up to you, the listener, to decide what those moments are.

The next and longest titled EP on this list is "Romantiek Aan Het Einde Van De Wereld" which is Dutch for "Romance At The End of the World". This EP is a full collaboration with death of codes with complete vocals starting on 'Earth to End'. While witch house influences were slightly present on Crystal Cage's previous two release, this is where I really heard the influence the genre has on the project. Dragging beats slowed to a stop and ghostly vocals permeate this portion of this massive collection. Plus, a bit of a spooky vibe comes out on some of the songs (I'm looking at you 'Nightfall').

The last portion of the collection is attributed to both Crystal Cage and Somniare of AVASU titled "Deimos / Daedalia". This release still has the structure and orientation of Crystal Cage written all over it with mysterious synth work and long, drone-like stretches. However, with the gutteral cries and the raw guitar presented on it, "Deimos / Daedalia" shows what Crystal Cage would be if their focus shifted from heavy synth work to black metal. And what we get is outstanding and pure. It is angry yet concentrated; pulverizing yet calming. It is a paradox that probably should not work yet it does. Fantastic work.

I have to give heavy praise to everyone involved on each of these releases; for the longest time I wanted to review a work by Crystal Cage but time was aloof and did not allow me the pleasure to write something out. Alas, this collection was too good of an opportunity to pass up. Huge respect goes out to synthetic master Crystal Cage, to the witchy antics of death of codes, to the black metal cries of Somniare of AVASU, and record label Anywave for putting together this collection in such a gorgeous package. This is a wonderful start to 2020 and I can only hope that I will receive and hear more music like this throughout the year.

My only hope is that all the singles and other releases on Crystal Cage's Bandcamp receive a similar treatment in due time. I would love to see Crystal Cage's debut EP and their most recent collaboration with Somniare of AVASU "Upon a Black Sky", the following singles 'Witching Fantasy', '*', 'ᛞᚨ ᚲᚨᛈᛟ', and  'Little Giants', put out on either CD or cassette format. Here's hoping something like that can and will be done. Fingers crossed!

Waves Under Water - 'All of Your Light'

Halgrath - 'The Whole Path of War and Acceptance'