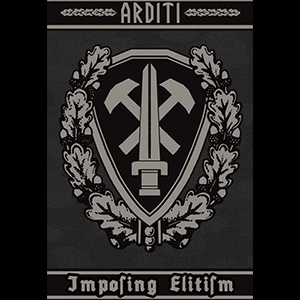 9.0
"Amazing"
N/A
Electroracle
Released off label 2014
Martial Industrial, Neo-Classic
Album of the Month February 2015
Unity, blood, and honor are all buzzwords frequently found in the titles of Martial Industrial albums and tracks. The genre attempts to capture the atmosphere of the Great Wars that eclipsed the planet in violence in the first half of the 20th Century. Specifically, most Martial Industrial and Martial Ambient artists identify with fascist tropes and symbols, drawing inspiration from propaganda posters and news featurettes from Nazi Germany and Italy under fascist rule. While many of the artists populating the genre have political motivations behind their music, others simply borrow the essence of this dramatic period of human history to create rhythmic tracks which combine neo-folk anthems with cinematic percussion, sweeping orchestrals, and megalomaniacal lyrics.

Few musicians have had such a monumental effect on the genre when compared to Arditi, a Neoclassical and Martial Industrial band hailing from Sweden. Arditi is the brainchild of Henry Moller of Leidungr and Puissance, and Marten Bjorkman of Octinomos and Algaion. The band is counted among the most influential genre innovators, joining a pantheon also populated by In Slaughter Natives, Blood Axis, Laibach, and Von Thronstahl. Their 2005 release, Spirit of Sacrifice, raised the bar in terms of production quality and creativity within the Martial Industrial community. Since this time, Arditi has released an extensive catalog of original releases as well as collaboratory albums such as Pylons of the Adversary (2014).

I was excited to get my hands on Arditi's latest release on cassette, Imposing Elitism (2014). Preview tracks from the album had been teased on the band's official Facebook page for a while, and I looked forward to digesting another emotionally stirring romp through Arditi's ultranationalistic Neoclassical anthems and pulsating war drums. Traditionally, the project's track and album names have been drawn from or inspired by proto-fascist and fascist ideology from the 20th Century. The very name of the band refers to Italian elite storm troopers who originally played an instrumental role in Italy's infantry during World War I.

The album opens with the title track, Imposing Elitism, and Arditi wastes no time with slow transitions or build-up as the song is immediately filled with an overwhelming, foreboding blast of distorted brass and deep, low frequency orchestrals. Snippets of radio crosstalk are soon joined by echoing snare drums that establish a marching beat that gives the track a definitive tempo. Orchestral hits and metallic drum samples pierce through the wall of brass suddenly and infrequently. The speech samples are distant, and most of the instruments sound as if they have also taken up residence at the edge of the soundstage. This establishes a vivid and bleak world where the State is preparing for total war, militarizing every asset to do mortal battle with Her enemies.

Track two, Heroic Age, begins with characteristically deep string samples and a wavering, mournful choir. It sets up the perfect atmosphere for stirring, powerful poetry, where the spoken word becomes an instrument of its own. The narrator speaks longingly of an age of immortal heroes, militaristic gods, the inevitability of war, occult secrets, vengeance upon the enemies which once profaned Europa, and the dawn of a new golden age of philosophy. Violins and percussive marches flow freely in the background and evolve over time.

Templets Heliga Hard follows a similar formula as the previous track with vocal samples, roaring orchestrals, and barely perceptible male choir samples that rest on the edge of hearing. About one minute into the track, a heavily compressed folk anthem is accompanied by metallic drums. In the last quarter of the track, the vocal sample returns alongside rumbling strings that pervade the track's final moments.

The fascist obsession with the occult and with pre-Christian religions is exemplified perfectly in track four, Order of the Black Sun. You are immersed in a fusion of ritualistic percussive elements and ominous throat singing. Neoclassical orchestrals tear through the low frequency registers to harmonize with the vocals, and soon replace them entirely. It isn't hard to imagine yourself standing in an abandoned temple in the European countryside, joining a ritual presided over by a resurgent neo-pagan cult that cherishes the symbols of the Germanic barbarians that were tested ceaselessly by the harsh Bavarian Alps, and tempered in the crucible of war.
The Earth Shall Tremble Under the Tramp of Our Feet starts off as a quiet piece until it is made victim to the unrelenting force of Arditi's percussion. Occasionally, the drums fade out to highlight archival samples, and a mighty choir resides off in the distance, keeping with the cadence of the relentless march. Sturm Auf Die Zukunft is a much calmer track by comparison, with an orchestral piece taking center stage with a stirring nationalistic speech in close accompaniment.

Track seven, Dawn of a New Mythos, is driven onward by a courageous neoclassical orchestra. Perhaps the most instrumentally complex track on this Arditi release, it stands out as one of the strongest songs on the album, and perhaps one of the best single tracks that Moller and Bjorkman have produced under the moniker. Unfortunately, this sets the bar high for the following track, Forfaders Dyger, and the song fails to take the breath away like several preceding stronger tracks on Imposing Elitism.
Fittingly the album ends with the beautiful and somber Ashes Scattered in a River. The piece is mournful, performing a solemn, final fanfare. That being said, there are snippets of ominous melodies on the wind which remind us of the harsher reality that previous songs on the album painted.

With the exception of one or two underperforming pieces, Imposing Elitism is perhaps one of the strongest Arditi releases in recent memory. It is clear that the duo have fully utilized the extent of their abilities to create a sweeping, emotionally-rich tribute to the terrible wars of recent past. It is easy to get caught up in the fascist imagery and historical implications of Martial Industrial music, but if you approach the genre and the release in an apolitical way, you can fully enjoy the music and the memorable experience it provides.

Even though Arditi's works are rife with these controversial symbols, fascism is never particularly glorified or portrayed in a positive light, and instead the album opts for an all-encompassing exposition of the rise of Nazi Germany and its allies, and follows this through to an intense conclusion. Nothing could ever accurately capture the unprecedented human suffering that resulted from World War I and World War II, but Arditi have once again created a fantastic collection of tracks that remind us of the richness of the human spirit, and the limitless potential for mankind to fuel its political ambitions with unbreakable and terrifying willpower.
# arditi
# martial-ambient
# martial-industrial
# martial
Feb 24 2015
Ecstasphere & Aphexia - 'Klangportrats I+II'
Previous article
Sato Sato Releases New Single, Seeks Label
Next article

Temple of Death
Various Artists - Septic Vol.5 is available at POPONAUT from 14,45€

Worms of the Earth - 'Netjer'

Worms of the Earth - 'Anagami'

Worms of the Earth - 'The Lesser Ophidian Gate'

Worms of the Earth - 'Sitra Achra'