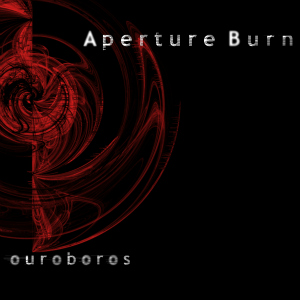 8.0
"Great"
N/A
Electroracle
Released off label 2012
Synthpop, Electro-Industrial
Aperture Burn is the project of Aaron H. from California, who describes the project as "dark electro with elements of industrial and synthpop". 'Ouroboros', is an album of 11 tracks and 45 minutes plus playing time, also tagged as experimental, released on 5th April 2012. The project is completely new to me and very little information appears to be available.

Our entrance is "A Tongue-Cut Sparrow", which is a Japanese fairy tale 'Shita-kiri Suzume'. A good piece of music and I can see that sorrowful old man grieving sorely for his pet sparrow if we follow the fairy-tale. To cut the story short, the old man's wife who cut the sparrow's tongue dies a gruesome death and everyone else lives happily ever after. There are other versions of the tale. Deep synth sounds and piano notes, with rumbling drums like thunder in the distance, and fairy-tale tones, setting the scene to our story.

We follow with "Reclamation", the first time we have heard vocals and good they are, clear and strong. A nice piece of synthpop musically but with those vocals give it something extra and make it very different. With a good but eerie rhythm and melody, fascinating to listen too. Reminiscent in some ways of much of the 80s synthpop as it's emotional but not operatic as much of it was also. I am also hearing Godley & Creme, and Jon Anderson & Vangelis. In that kind of company it should leave you in no doubt that I think this is a great sound.

"Through The Wind", slow drums to start, synths build up and vocals kick in, and the whole thing has a great melody once again. I could mention all those names again but no point, they may have been from the 80's but this still has a very new feel to it. It's emotional once again, and the vocal tone and harmonies are good. "Within Or Without" has a nice synth intro, and contains an element of experimental sound, amongst those nice synth lines which are a constant. In places the vocals seem a little too distant at times on this track, but it still has a beautiful melody, made by the organ tones.

"A Path Between I and II" brings us sonic sounds, the atmosphere is almost that of a thunder storm. Then calming as we perhaps find that path, but the path takes twists and turns as we go along it, sometimes we may even lose our way or stroll of it for a time. Use your imagination and you may enjoy it as it has it's exciting parts, but if you are not in that kind of mood I suggest you skip it.

We return to much of out previous format prior to the last track in, "New Sight (featuring Lauren Krothe)" a classically-inspired singer of gypsy ballads. I first notice that the production on this track does not seem of the standard of previous tracks, noticeable from the vocals. The harmonies with Lauren I believe could be excellent.

"We Cast Our Own Light Here" starts with some wonderful storybook synths. The album has great lyrics and this track in particular with lines like:

"Licking the air like a serpent, our skin and past have shed
On this path, and guided by signs that seem to point to oblivion
We laugh in the face of destruction and cast our own light here..."

Maybe described as a mainstream pop track by many but it's outstanding and beautiful. Very 80's influenced as ever, but so fresh, new and crisp.

"Cognitive Drift" has a lovely sound once again, nice harmonies and great melodies. Bass sounding synths and drums against a sound of distorted bells make for a great overall sound and effect. "Awake" is another track of the same great standard, but different beat and sounds. Still the 80's sound, great vocals, a lot of emotion, but not so much melody. This presents us at least with variation.

Our penultimate track is the title "Ouroboros". The name 'Ouroboros' is used to represent cyclicality, in the sense of something constantly re-creating itself, like in eternal return, cycles that begin again as soon as they end. So may have been a better track to complete the album. Contains a great synth line, vocals and nice lyrics. A noticeable but subtle drum beat is also of note, it is also worth saying that the drum programming is good right through the album.

We conclude with "Sleeping At The Gates" and it just reminds me of a christmas hit, I haven't got the lyrics but the sound fits the role perfectly. Major differences, but I still have visions of "Jon Anderson & Vangelis - I'll find my way home". The vocals are clear, strong, echoing and emotional, the kind of sound that brings tears to your eyes. Musically also very strong with a wall of different sounds supporting the excellent vocals.

Conclusion:
An entertaining and clever album which it is a privilege to have had the opportunity to hear. It's not perfect but it could be as near as is possible. In the main I have to repeat myself, as the album has great synths, vocals and lyrics throughout. I had times when I thought it was getting monotonous but the jury is still out on that one at the moment. I am not going to pick a highlight from this album, please take the time to listen to it.

It's for lovers of early 80s music, but that sound when it's good never dies and sounds as good today as it did then. The album is also very suitable for those who like something more mainstream or those who just enjoy electronic music. It's also on bandcamp for an incredibly low price and the excellent "We Cast Our Own Light Here" is also a free download. We really have to hear more from Aaron H, as we may have a composer here following in Vangelis's footsteps. A long way to go but everyone has to start somewhere.
# aperture-burn-
# ouroboros
# synthpop
# electropop
# jon-anderson
# vangelis
# godley-andamp-creme
# experimental
# lauren-krothe
Jul 06 2012
Sin D.N.A - 'Revelate'
Previous article
Cesium_137 - 'Science and Sound'
Next article

Bandcamp
Third Realm - The Art Of Despair is available at POPONAUT from 16,65€