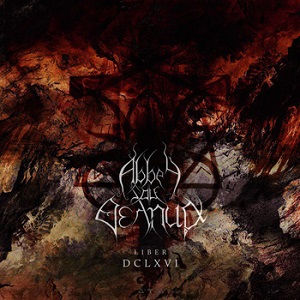 5.0
"Mediocre"
N/A
Electroracle
Released 2014 by Wraith Productions
Black Metal
Abbey ov Thelema is a two man Polish/Slovakian group based around chaotic black metal. What started out in 2009 as a one man dark ambient project of founding member Delgrast made a major transition after two demos were released among his friends. The first, official release of the band occured underneath the banner of Sonic Temple Records in 2011, titled A Fregment ov the Great Work. However, that album was released with another man named Vilozof.

Later on down the line, Delgrast joined the project, and released another demo to find a label titled, Prelude to Apocalypse in 2012. Since then, the band has labeled their music as transcendental khaoblack metal, reflecting their views of the cosmos and nature in music. And, perhaps as a random side note, their band is named after a small house in Sicily which was used as an occult center founded by Aleister Crowley and Leah Hirsing between 1920-1923.

And, I suppose that their demo did them well, as they were able to release their latest, Liber DCLXVI via Wraith Productions. And, well, both the title of the songs and the album name are derived from latin, except for the fifth song, which name is derived from Greek origins. Anyway, the songs and their titles (translated to English via Google translate) can be found within the tracklist section.

Now, the album itself kicks off with Hymnus DCLXVI began off very well and creepy as it might be. Back to the roots of the project, we're given dark ambient sounds with the sounds of flies buzzing over something. The slightly audible sounds of a TV shifting in and out of static is in the background, but, after about half the song playing into that, we are thrust into a metal song complete with distant vocals, a choral effect going off that speaks of something epic, along with your standard drums and guitars. This was a great way to start off an album. And it transitions right into the next song.

However, I don't have as much praise for this song as I do the last. Although the first suggested that the rest of the album would be cohesive, we're given a truly chaotic song that barely has anything put together decently. The piano work is good, but on top the drums and guitars that are really just doing their own thing without even remotely trying to stay with the rest of the song, it turns into an ugly mess. The vocals range from fairly goblin-esque to almost an angry, chanting like sound. It's actually at the six minute mark where I start to enjoy the song fairly well. Everything quiets down, barely a sound, till more strings come into play. The drums certainly play out nicely, and the vocals, though still goblin-eque, have a place here. It was the final three minutes of this song that stuck out to me more than the rest of the six.

Much of the same can be said for the next song, De Septem et Septem Salpinibus, which is pretty much still a wreck. The symphonic metal influences do manage to make my ear perk up here and there, such as a little beyond the two minute mark. But, once again, it's the slow parts that I find most entertaining. Starting at the three and a half minute mark, things go quiet except for very slight sounds that present themselves here and there. We're give some riffs, piano work, and more epic sounds at around the six minute mark, until the track decides to go bat shit crazy again which I just could not enjoy. The static outro was alright, even a bit creepy, reminiscing the intro.

Before long, we're thrust back into more black metal nonsense. Once again, everything is trying to do something all on its own. However, at the three minute fifty second mark, something magical happens. Piano work with the sound of a thunderstorm comes to play before finally showcasing a beautifully led operatic voice which is eventually accompanied by chorus effects and drums. The screaming that occurs in and out of it is alright. But, truly, from that moment in the song till a little after the eight minute mark was sheer genius. I loved it. Until more shit came on as the song ended for the final two minutes.

De Condemnatione Magnae Babylon served up a fair marching tune for the first minute and a half that was rather medieval in a sense. Sounding like it belonged in either a musical or a medieval epic opera was hard to choose over, but, needless to say, the sound was soon ruined by more chaos. While some breaks from the hard music was welcome, the song was till pretty bad for my tastes.

Coming to the second to last song on the album, much of the first half was the same crap I've been garnering a distaste for since the beginning of the album. However, the second half served up some nice, more marching like drums and a synth that managed to make an emotional impact, in a sense. And, the guitar work was pretty splendid. More of this needed to happen; where everything played in unison and could be regarded as a song.

I hated the intro of the last song, as it really sounded like a bunch of babies eerily screaming for their diaper to be changed and was highly annoying. I liked the nine and a half minute mark to the twelve and a half minute mark, for it was nice and cohesive. Even peaceful in a sense, with more dark ambience just dripping right off it. But, for the most part, couldn't stand the rest of it.

And, well, what I suppose what I'm trying to say with this whole review is that these guys really know what they're doing; they have shown signs of sheer aptitude to make good music all throughout the album. What I don't understand is why everything just sounds so out of place half the time and it's rather annoying. I'd like to see less drum smashing and guitar riffs that absolutely destroy my ears and more well placed and put together music that will make me want to listen to the album in whole, rather than just blips and bleeps here and there.

BandCamp
Within Temptation - Hydra is available at POPONAUT from 21,95€

Her Noise Is Violence - 'Unresolved Trauma'

Fractured - 'Beneath The Ashes'