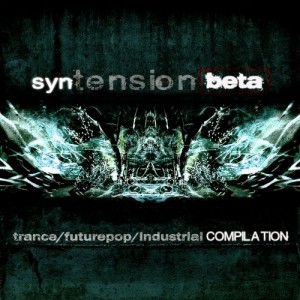 9.0
"Amazing"
Released 2012 by Synthematik
EBM, Electronics
Synthematik presents a new volume of the Syntension compilation series focused on trance, futurepop, and industrial instrumental music. 'Syntension Beta' features another 13 instrumental tracks from some of the best projects from the post-Soviet territory such as Mental Discipline, Ginger Snap5, Sleetgrout, Unity One, De:Source, and Dirty Bird 13 as well as other interesting up-and-coming projects. In addition, the compilation features two special guests from the USA and Germany. Most of the tracks presented on Syntension Beta are exclusive or previously unreleased.

Our first track is "Tomorrow (Instrumental Version)" from Unity One, the Russian/Moldovan duo Mike and Rush, and a good futurepop start is it too. It's great made for the dance floor and club, synthesizer music. It sounds so flamboyant and majestic as it flows along, with a good techno drum beat, much rhythm and nice synth melodies, and some very good synth lines amongst all this outer goodness.

The first guest is Terminal Defekt from the USA, with "Judgment Day". This has a slightly more harsh sound than our first track, edging away to more of a electro-industrial sound but still with a techno beat and rhythm. In the main it is well layered and another good floor filler, with again some nice lines and melody. My only criticism is of its need at about 3.45 to use a sample and sound muddled. It recovers well for a while but this process seems to repeat at the very end.

"Don't F_ck With The USSR" from the Ukrainian project T44 is probably many people's first taste of what is now being labelled as sovietcore. My first thought is of Groupe-T, specifically because of the samples used and the definite EBM influence. Certainly not old school EBM, but it does have a hard and sparse but yet danceable beat and is very clean in sound, and is once again techno driven. For me T44 are a good new find although the project has been around since 2010.

"In Search Of Necropolis" is from the Russian/Palestinian Sector Infinity. Another dance track with a lot of trance. It also has a very strong middle-eastern ethnic component running right through it. The trance element and middle-eastern vocals work well together and make for an interesting combination, although I feel will not cater to the taste of the majority of the listeners of this album, but I hope I am wrong.

Next we have more futurepop in "Time Is Over (Instrumental Version)", from the normally predominantly dark electro sounding Sleetgrout from Russia. It starts with a real stomping drum and dance beat, which continues along with a nice synth melody of a trance like nature, with the techno element of the trance being very apparent. There are some breaks in the tempo which introduce a good synth line before it drives off once again, a real floor filler.

I am always excited to hear the Russian Alexandr Mental AKA Mental Discipline, this time with "Follow You Behind (Instrumental Mix)", and I certainly wasn't disappointed. Some excellent anthemic synth driven uplifting great futurpop made for the club and dance floor. The synth melody is grandiose almost to the point of being extravagant. The sound is regal and glorious.

"The Vulture" is by Perfect Symmetry from Belarus. A very techno beat driven but darker track. It also has more than a hint of old school EBM about it, specifically within its great beat. Much the same could be said about the element of hard trance that it also contains, although I would say that this is more of an effect. It also has a lot of hardcore breakbeat style about it.

The second guest on the album is Kryonix from Germany and their track "Die Krähe". I just knew I was going to like this from the start with the sexy female sample. A fun dance track made all around those samples. They describe their music in general as being Hellectro, but to me this is more Aqua than Dulce Liquido. It bounces along so well as will the floor, and as I said it's just pure fun and I like it a lot.

The Game (Instrumental Version) from the Ukraine's Dirty Bird 13 has the hardest and darkest start yet. It's real Harsh Electro with a big hardstyle element. A real pounder for the dance floor but contains much more, from a little drum and base to much more hard trance. Synth driven and powerful but yet with inner trance like beauty. It's that inner beauty that makes it so good as they allow it to shine through amongst all the outer harshness and grit. A great beat, rhythm and beautiful synth lines complete a very good track.

Also from the Ukraine is Inxera Syndrome, described as a one-man electro-industrial project, who brings his track "Wake Up, Baby Doe (Rework)" to this compilation. The music is centered around some fascinating opera like female samples. It's certainly complex and its layers are well structured and put together, a task well done as to do this around those opera like vocals could have easily ended in disaster, and it is far from that. The sound is almost overwhelming, it's so deep and regal.

Next we have the Diversant:13 from Belarus remix of "Move Your Head" by my current favorite Russian 'bang and crashers' Archie and Alexey AKA Diezel Xzaust. A great hard driving techno beat-aggrotech track made for the club and guaranteed to make anyone move. It will flood a dance floor with its hard house feel. It's also full of hard trance and hardstyle beats and synths and contains some good vocoder use. One to really make you let go of reality.

"Sail Away!" is from the Ukraine's Ginger Snap5. The synths bubble up along with some sonic sounds into a real pounding beat, with those sonic synth sounds continuing. Another dance floor filling electronic anthem. The sonic sounds prevail amongst a wall of other synth sounds and beats. So very techno with influences of Moroder and Kraftwerk, but with an industrial edge to keep it more interesting and different.

We complete the compilation with "Sands Of Eternity (Lost & Forgotten Version)" from the Russian dark-future project De:Source. It's dark and melancholic, a dark-electro and progressive trance combination, which I believe they describe as doom-trance, it sounds very fitting to the created sound anyway. It also has an ambient and chillout feel to it, which all add to the trance state, made from the good synth music and a very good drum rhythm.

Conclusion:
There have been some quantity over quality criticisms over some of these releases before and I believe that criticism was justified, although I also appreciate the reasons as to why. But no one could ever say about this album, it's all quality every last track. Synthematik do a great job in bringing us these compilations, and although I have enjoyed everyone I have heard to date, to me this is best yet as every track is well produced and has something extra to give to the listener, this is real added value and I highly recommend it.
# synthematik
# futurepop
# industrial
# trance
# unity-one
# terminal-defekt-
# t44
# sovietcore
# sector-infinity
# sleetgrout
# mental-discipline
# perfect-symmetry
# kryonix-
# dirty-bird-13
# inxera-syndrome
# diversant13
# diezel-xzaust-
# ginger-snap5
# desource
Sep 13 2012
Chrysalide - 'Lost in a Lost World'
Previous article
Fahl - 'The Path to Emptiness'
Next article

Synthematik
Bandcamp
Various Artists - Behind The Canvas Of Time is available at POPONAUT from 14,95€

Various Artists - 'Burial of Baron / I Ask You / Mars'