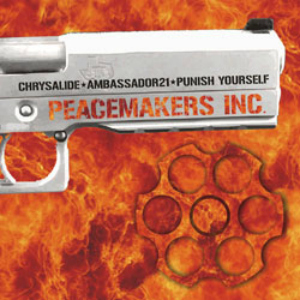 9.0
"Amazing"
N/A
Electroracle
Released 2009 by Invasion Wreck Chords
Industrial
This is the second part of 'Peacemakers Inc.' presented by Invasion Wreck Chords, better known as the band Ambassador21. The album consists of 14 tracks, 5 from Belarusian Digital Hardcore band Ambassador21, 5 from the French Digital Hardcore band Chrysalide and 4 from French Industrial Punks Punish Yourself. The album was first released in 2009 and is distributed by Ant-Zen.

CHRYSALIDE
The self-proclaimed Electro-punk-noize-terrorists Chrysalide's first track is "Lizzie In Toxicland". Guerilla noize is probably a fitting term for this aggressive and raw frenzy. The Skinny Puppy analogies are always going to be there but this is more poetic aggression. It features some very good hardcore punk vocals, and amongst the frenzy there is so much from the classics, to the circus, fairground and marching toy soldiers sounds of Toxicland. All I can think of just now is how much I could change and achieve with that terrible Disneyland "Its a Small World" place, using this as the theme music. More distorted screaming greets us in "Apathy Is Killing Us", and more in your face aggression, broken up with some female samples. If these guys don't wake us all up while screaming their important message in our faces then nothing will. Again they break off from the frenzy at times and use some horrorscape notes and sounds to create the required disturbing soundscape. Next we have "We Are Food For Worms", which I suppose is true unless you are cremated. This has much more of a constant beat to it through the distorted drums, and that great chorus line to scream out as we go along. It's wild but with so much rhythm through its tribal sounds. The initial samples of "Lifestyle (versus Quietophobic)" give us quickly an idea of the general attitude to expect in this track, which is hating everything and everybody. It then quickly turns into another wild, aggressive and offensive track as they all are. A hard hitting track with hard beats and loads of distorted screaming. Chrysalide complete with their relentless and inexoroable version of the classic track with "Another Brick In The Wall (Traumanoize cover)". Industrial beats melded with hardcore punk noise and attitude. A good and relevant cover, a rejection of society and mediocrity, and the voice of a disgruntled and frustrated generation.

AMBASSADOR21
The first track from Ambassador21 is a good example of just what they are capable of in "Comes In Your Face". Starting with classical violin from Andrew Lloyd Webber's Variations, also used as theme tune to Melvyn Bragg's South Bank Show on UK TV, turning to anarchistic industrial and then anarchistic rock and roll by using samples from Bill Haley's 'Rock Around The Clock'. The way they first overlay the industrial drum beats on the classical violin is excellent, along with Natasha's screaming vocals. With Ambasssador21 there are no rules. "Afghanistani Syndrome" brings experimental noise, overlayed with metal and more digital hardcore raging frenzy. This is real good stuff by some heavy weight noise assassins. So much pure energy spills from this chaos. There may be no rules and it seems to be done with complete anachistic freedom, but the noise is still poetic. Features some great metal guitar work. Again so much energy from the start is evident in "I_Wanna_Kill_U.com 2k9". Industrial beats and perfect for the track vocals in Russian and English make another good industrial punk track. Some of the best experimental heavy noise I have ever heard, if not the best. The industrial drums are what makes this most special for me. "New War Sensation", starts a little quieter, building up a dark soundscape, but you know its not going to last. More frenzy but not on the same scale as we have heard before. The guitar work is good once again as is the almost constant industrial drum beat. With the combination of the two, the further I got into this, it really enabled me to lose it eventually. So just hope you wake up on the other side. Drumming frenzy with vocals is my first description of "Enough". An abstract powernoise track mixed with hardcore techno. It's extreme and experimental but doesn't have the poetry or effect on me of the previous 4 tracks from this duo. However the delirium and madness still stays with me.

PUNISH YOURSELF
The first from Punish Yourself is a live verison of "(My Name Is) Legion", and we are met with some screaming guitars from hell. Vocals are punk as is much of the sound, overall its refined sound is that of debauchery and depravity. But then it also stinks of glam rock, and heavy metal, with a great beat. This glam-punk hysteria could even create used correctly dancefloor armageddon. "Than A Thousand Suns" is a track of less than 2 minutes and is a build-up for the next song "Shiva Only Is God", and what a build up it is. "Shiva Only Is God" features great guitars and rhythm, with such an aggressive guitar driven format and trance like structure. This band must be a fantastic live experience, so much vision comes over even from the CD tracks. These tracks also add greatly to the diversity of the album. These tracks are like a bomb waiting to go off as was the first. Our final album track is "Zmeya" and we are met by the heavens, surely there must be something wrong here. There was and everything soon appears dark once again. This takes a little too long to build up for me on CD although I am sure this would not be the case if I was watching live. When it does build up again through the drums and electronics its guitar driven madness with great rhythm and as if the gates of hell have opened up once again. This is a great industrial apocalyptic track but the glam rock vision never goes away. Making it another dancefloor armageddon possible as it sets its Judgment Day scenario, and what a way to go.

Conclusion:
Ambassador21 have been spitting their rage across the world now for more than ten years, and surely soon the insurrection must begin. Just as anarchistic is the sound of cyberpunks Chrysalide. Both providing us with some excellent digital hardcore and extreme powernoise tracks. Punish Yourself completing with their unique industrial rock sound making the release more diverse. But all are as aggressive, energetic and anarchistic as each other. After listening to this album several times I am not sure whether I will be in the same mental state ever again, and that is a complement and a recommendation. At least its a great stress reliever. 'Peacemakers Inc.(II)' was also excellently mastered by Ambassador21 at Invasion. All the Punish Yourself tracks are live recordings but the quality is very good and complements the album and adds to the listening pleasure. So hard to pick highlights as whole thing was a joy to review, but my first choice is by Punish Yourself and their live verion of "(My Name Is) Legion", because of its first impressions and the way it completely immersed me in its sound. I now hope that this album gets the recognition it has always deserved,
# peacemakers-inc-ii
# belarus
# france
# ambassador21
# chrysalide
# punish-yourself
# invasion
# invasion-wreck-chords
# digital-hardcore
# industrial
# punk
# industrial-punk
# powernoise
# hardcore-techno
# glam-rock
Aug 16 2012
Digital Diktator - 'From the Edge of the Universe'
Previous article
Cortex Defect - 'Cortex Defect'
Next article

Various Artists - 'Uturn 3: The Dark Side Of The Beat'