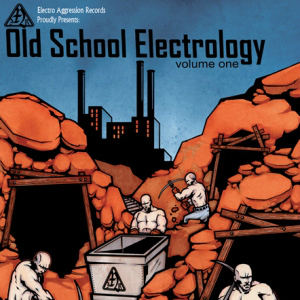 9.0
"Amazing"
N/A
Electroracle
Released 2011 by Electro Aggression Records
Old School EBM, Dark Electro
To Treat this like a regular release would be akin to treating the renaissance as an awkward formality. Old School Electrology has been on the lips of anyone who frequents the EBM underground since its early conception, over half a decade ago. Concieved by Electro Aggression Records' very own Nader Moumneh, OSE is the once-in-a-lifetime fulfillment of a lifetimes work and aspiration.

This 'beast box' catalogues almost 80 different bands and styles, spanning the underground of Old-School EBM, 'Anhalt' Ebm, and Dark Electro, and for even the more potent of Old-School fans, there is at least three discs worth of new material and artists to sink your teeth into.

Naturally, OSE is limited to 800 copies, and already they're surfacing in every corner of the earth. This is a box set; the like of which I've never before seen, and the information, background and research put into the packaging and booklet is almost worth the modest asking price in itself. Marketed as 'a distinguished jewelry box combining the old school lure of natural, fancy colored rough diamonds', the release is themed around an army of skinhead miners searching for 'diamonds', each of which is mined and released on this opus. In classic EBM style, the box is littered with motivational quotes - there is also a heartfelt testament by Nader, a HUGE booklet recalling in great depth the history of EBM, Dark Electro, and Industrial music (this actually had a plethora of information that I didn't know), and a credit sheet introducing EVERY band on here in detail, with information on who, why, how, and where - quite simply a dream within a dream of anyone even slightly sick of modern day EBM.

Disc 1 on this beast is entitled 'Old School EBM'. Swedish Agrezzior are one of my absolute favourite old school bands, consisting of members of Dupont, Autodafeh, and Menticide. Their contribution; like most of their material, is the perfect blend of ebm, punk, and oi!, without the need for troublesome for fascism or politics. Astma (Sweden) are one of my favourite bands, and they finally break through to a wider audience with the classic 'Honor and Glory. Belgian duo 'Darkmen' are another act known to me, yet the ability to produce exclusive tracks that don't feel rushed, and could fit onto a best of compliation for every act I am hearing on here is still something mysterious and quite simply; chilling.

Some acts on here never grew on me previously, but the tracks unearthed here have made me reconsider that and add them to my shopping list, 'PP?' being the main re-discovery. More famous acts, such as Serpents, Lescure 13, K-Bereit, and the infamous tongue-in-cheek project 'Ugh...' give the extra stamina to the disc, and the acts that are new to me ('Ondska, Pact of Warsaw, T.A.N.K., and Oldschool Union) are among the greatest artists on the entire compliation.

As a stand-alone Old School EBM compilation, this disc alone would be a killer, but this is disc 1 of 5. What nuggets can Disc 2, 'Authentic Dark Electro', hold?

... let it be known that on reading this tracklist, I took a rather deep breath. Amnistia is an act that most of you will know, Morgue Mechanism (also known as Morgue) are a cult act that I believe to be from Brazil, Pro Patria are just timeless, and the rest I have at least mostly some degree of recognition towards.

What better way to open this disc, then with Slovakian act 'Terminal State' - their contribution is text book Dark Electro, but they are also living proof that EBM has spread all over the planet. IC 434 remains its usual, energetic self, and as someone who knew this act under its previous guise 'Tales of Doom', it's quite a delight to see that Geert is being recognised as much in 2011 as he was in 1990. This is exactly what Nader has been trying to get us to realise since 2006 - there is life behind the stompy, verbally pathetic drone that most of us are familiar with, due to the monopoly of club DJs that are all cut from the 1990s cord. Ebm started with this style and essence, and why shouldn't bands emulate it? Metal bands still emulate Black Sabbath all the time, and they're not considered copycats. Therefore, we should not consider any new band a clone of Suicide Commando or Front 242 a clone, either.

French act 'Brain Leisure' is one of the very few on here that I haven't heard before, and unsurprisingly at this point, it's a goer. Amnistia and Morgue Mechanism already have an established and dedicated fan troupe, and this will serve only to boost the disciples further. The four following acts (Necrotek through to Nordschlacht, Second Disease, and Severe Illusion) further their own interpretations of Dark Electro to compliment this boxset like a fine Gravy, and after the unstoppable war machine that is Pro Patria, we have the first truly unknown act on here : Red Test, a.k.a Chris Lewis. "Holy War" is actually one of the easiest tracks on here to get into, and it's potentially club-shattering. By that, I mean that I urge you all to watch this space. This artist is going to be huge. Object are on the verge of a breakthrough, and a double CD is in the way via E.A.R - if this track
doesn't seduce you into exploring the January Sales at COP International, then i'm not sure what will. Ascii spelling may deter the puritans among you, but tEaR!doWn are an act being heralded by many as the best on OSE.

This German quartet combines the best of Dark Electro and brooding EBM, and if anyone on here is going to be propelled into the Ionosphere, these guys will be a good wager at your local betting shop.

From the remaining acts on disc 2, Morticians remain the most unique with an element of Darkwave and Neo-Goth. God Experiment are severely under-rated and nothing short of brilliant, and Seven Trees, Trial, and PF7 can be recommended to most of the readers of this review without hesitation.

Discs 3 and 4 combine both Old-School EBM and Authentic Dark Electro, each being filtered to display similar acts in a 38 track melting pot of liquid gold.

I consider Disc 3 to be slightly above the others, but that is only due to personal bias. 'Breathe' (previously Placebo Effect) are a favourite of mine, and Splatter Squall are an act years ahead of their time. Who could possibly fail to mention 'One Eye Wanders'? This solo project by Nick Copernicus has been hailed by everyone who owns one of the 50 copies as being the next revolution, and it comes close, with Acretongue, to making the most apparent and advanced soundscape in recent memory. It's simply not possible to mention every act on here, but none of them should be overlooked, ignored, or criticised. Especially on disc 4, where I will talk about a few of my most admired acts : 'The Blister Exists' is a top quality Anhalt EBM act, previously known as 'Judge:Dred'. Venetian Blind, courtesy of Norman Klaus, is more of the ambient/IDM persuasion, but is gentle and poignant, Page 12 are dark and foreboding, and Bodyfarm are essential.

Most of you will recognise amGod, Stin Scatzor,and of course yelworC, but the point of OSE is not to highlight the established acts, or those who are already in little need of promotion. The aim of this is to re-introduce a scene that has been lost to modern marketing, and to prove that there is an alliance of artists all over the world that are equally as wonderful as their peers.
It's like Nader is drawing a family tree and branching each act to their ancestors. He's effectively re-writing the way we view EBM, and the 6 years of production and influence have paid off. The final 'disc' here is an accumulation of the 5 bonus tracks available by using your download code located in the box set, and theres no rock left unearthed when compiling this.

Beyond music. Almost beyond words, and beyond any expectations I could have had. This has to be on all of your Christmas lists.

Mission accomplished. Nov 19 2011
Terrorkode - 'Corrosive Audio'
Previous article
Integral - 'The Past is My Shadow'
Next article

E.A.R
Various Artists - Bodybeats is available at POPONAUT from 10,95€

Various Artists - 'This is What We Call British Industrial'