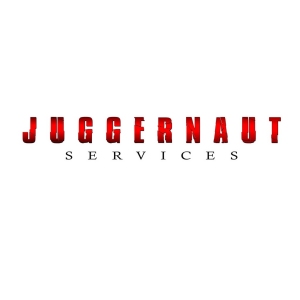 8.0
"Great"
Released 2012 by Juggernaut Music Group
Electro-Industrial, Harsh EBM
Juggernaut Services is a new management/promotion service offered by Brutal Resonance's very own Nick Quarm and has amassed an impressive 16 acts (at the time of this review's publication) which are showcased in these two compilation albums of 15 and 16 tracks respectively.
With such a wide variety of artists on this lineup, I was expecting the compilations to sound a lot more disjointed than they actually do. Thematically, 'Moving Mountains - Volume 1' is much harder and darker with more distorted vocals, while 'Calming Cyclones - Volume 2' is still hard hitting and often dark at times, but provides much more melodic singing with cleaner vocals.

'Moving Mountains' starts with a classic dark and harsh EBM stomper by nolongerhuman and it really sets the tone for the rest of the album. Tactical Module provides a nice little Amen-Break-and-guitar driven ditty in "Dead Zone", while Cease2xist's "Teenage America" provides a glimpse of the debut album that's had people talking in excitement this Summer until it's recent release. ReConStruct's "All Gone Awry" has some really unusual and interesting synths and pad textures while the female vocals keep things feeling urgent.

Controlled Collapse makes things even freakier with "Halloween", before the album takes a spacey cyber trip in Warsickle's instrumental track "Help From Outer Space". Eschaton Hive kick things up a notch with their pounding guitars and fierce growling, before ReConStruct return for a second outing in "The Maelstrom" - and that it is, for sure. Warsickle's second track sees the introduction of some distorted vocals into the mix of dark electro sounds as they dance around the pounding beat.

Tapewyrm's track "Insomnia" kicks in with some incredibly powerful industrial drumming that is pretty relentless throughout the whole track as it gradually builds up into a huge, distorted behemoth slowly plowing through everything in its way to clear a path for Cease2xist's second track, "Tonight". This one's harsh but incredibly catchy and definitely dancefloor-oriented. Controlled Collapse's second song "This Nightmare" introduces a harpsichord-like synth into the industrial mood, which is interesting and definitely novel.
Plastic Noose treats us to some creepily sung and grunted vocals in "Zu Allen", before Eschaton Hive returns with the seedy "Want.Have.Need", peppered with spoken word samples about escorts and fucking. nolongerhuman finish things off with a floor filler of an EBM track that has some really huge, wide synth sounds to usher in the end of the album (and maybe even the apocalypse).

Moving on to 'Calming Cyclones', the second compilation, and we are welcomed by the deliciously dark and tasty beats of the much-loved XP8 with "Burning Down", a trance-influenced number that is sure to get you moving. Next up is MiXE1's first track on the compilation, "Breathe". This young artist has been garnering a lot of interest due to his unique vocals and production style and this song is a perfect introduction to his guitar and synth-driven sound which is full of his trademark intelligent pop-sensibility.
Next up, the guys in Pittersplatter, who might look like Orcs from Lord of the Rings, but their songs are much more traditional EBM/industrial with gothic and occult themes, such as in this album's "Necrotech". This song has some great arpeggiated melodies throughout.

Next is Cortex Defect's first track, "Bliss of Surrender" that is full of well-written melodies but also features some unusually clean, sung vocals that are a nice change from the more common harsh and distorted styles found in electro-industrial these days. Then Kaltherzig brings a more acoustic-sounding track to the collection with "Messiah", boasting an almost goth rock/metal feel.
Retrogramme's "911 For Locals" punches through the darkness to bring a chaotic arrangement of synths and drum programming as a backdrop to the strangely hopeful vocals sung on top. Revenant Cult are a new brother/sister pair from Australia and this compilation sees the release of their first track, "Spectral Heresy". Their production is clean and tight and they've got some really quality sounds here and Jessica Nochols' vocals work really well on top, invoking a classic goth feel.

MiXE1's second track, "This Is Not Goodbye" has remained a favourite of mine since I reviewed the EP it comes from, Module 02 which I can't describe any other way but "futurepop meets Sonic The Hedgehog on SNES". It's addictive and you'll be sure to want to hear it more than once. Cortex Defect's second song, "Heart of Dust (Club Mix)" provides more club stomping fodder for the dark DJs and really showcases the strength and diversity of their music with such a wide variety of influences. Pittersplatter return for some more creepy, nightmarish tones in "Mummies and Music Boxes", which does what it says on the tin, really. Retrogramme return to blow your face off in the hugely epic "Heaven Is Closer Than You Think" with it's wall-of-sound mixture of guitars, drums and synths as well as haunting vocals.
Kaltherzig's tender, piano-driven ballad of a melancholy mood stands in stark contrast to what came before, but provides a rest amongst the relentless energy of this album. We arent permitted to rest long though, as Psykkle place us straight back on the dancefloor and they must have some help from The Land Down Under as it's titled the "City of Nodes (Revenant Cult Remix)". Plastic Noose return for the final time and bring the German sound back with their sinister "Road To Perdition" and Tactical Module see one more outing with "Dead Zone (Cortex Defect Remix)" that brings the best of both artists into one song. XP8 close off the album with the final song, "Trip (Remixed by Cutoff:Sky)" featuring some really brilliantly programmed vocoder on the vocals and is just an all-round impressive mix of the original track.

While not all of these artists are as strong as others, there is definitely enough of a mix here for everyone to find something of interest, including the fresh batch of newer artists which are sure to go on to bigger and better things in the future. The pacing and mood is tight enough for things to rarely feel boring and the only question is how exhausted you're going to feel after 31 tracks of hard hitting industrial. Check these out and you're sure to not be disappointed.
# industrial
# electro-industrial
# harsh-ebm
# dark-electro
Oct 07 2012
Various Artists - 'Ein Skopudhr Galdra / Mistsorrow - Split'
Previous article
Sinine - 'Dreams Come True'
Next article

Juggernaut Services on Bandcamp
Various Artists - Extended Electronics 2 is available at POPONAUT from 18,95€

Various Artists - 'Fall Is A House Of Gold And Rain'