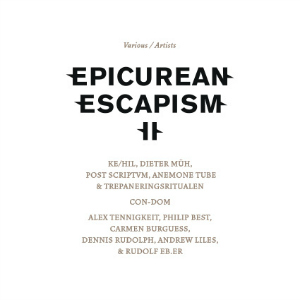 9.0
"Amazing"
N/A
Electroracle
Released 2013 by The Epicurean
Death Industrial, Power Electronics
I had been always respecting people that are willing to donate from their time and efforts for the scene of experimental music. I put an accent on the word "donate" in purpose, because it is not a secret that there is no money in that kind of music industry and most of the stuff that is done, whether it is releasing cds or organizing gigs, is done for fun in the first place. There are few people like that in almost every corner of the world and that is great because it proves that there are still individuals out there that don?t put money as a header for their efforts and helps this music to survive and to speak out loud. One of those people is Berlin resident Stefan which is more known for his personal project Anemone Tube that is being active for around fifteen years. After feeling the scene for quite a while, he understood that it is very important to take it few steps forward and to bring the extreme sensual experience to the next level.

That's how Epicurean Escapism mini-festival was born. Stefan saw his goal clearly; and very fast something that was only the idea of one person, turned to reality happening once a year starting from 2012.While been caught for a small chat, Stefan explains the background as:" With this festival project I am able to realize the craziest things, no other event organizer/label ever did before in the field of industrial music. My aim is to work across all media - to bring music, performance, visual arts, moving image and literature together, all related to dark experimental industrial. Firstly I want to present musicians working in the area of visual arts, literature and video, but also to involve artists not directly connected to the industrial scene, but thematically related to the context of escapism; so overall the festival is based on the theme/concept of (epicurean) escapism".

Escapism as the form of human mental diversion is being cultivated for many years already. "The radically critical, sometimes even phobic aspect of escapism was encapsulated for the first time by decadent writers of the classical modernism; its traces can be found in poems of Baudelaire and George, in the novels of Huysmans and the uncanny tales of Lovecraft. In these texts, escapism appears as an anthropologically anchored longing (for death) and at the same time as a retreat from the cold reality of an icy society whose rationalism, according to Houellebecq, an heir and executor of this literature, would minimize any value and importance of life." (Taken from the official web-page).

As my reader could already understand, there were few themes presented during this special evening: visual arts of different international guys like Alex Tennigkeit, Andrew Liles and others, a unique video screening made by Mike Dando (Con-Dom), and of course a pack of strong bands that aimed to escape from reality, not alone, but with all the noble audience that paid respect and attended this show. I am sure, that there are also people all around that were unable to feel the festival physically (I am one of them), but are really curious about the content. And here I would like to thank Stefan for one more brilliant idea - to release a pack that could give a little appetizer of what had happened during this festival. This pack comes as an audio cd of few tracks from each band that participated in the show, a DVD of the video screening and a beautiful brochure with the visual arts. I know that it is not enough to replace the feeling of ?being there live?, but I will put the cd in my player, concentrate on the art works and pretend that I am there.

The line-up of the musical part of the evening was relatively short, that's why it gives an opportunity to discuss all of them during this review. An opening track comes from Ke/Hil that blast with composition under the code name "Dark Germany". Generally, it is a regular power electronics track without any special highlights though it is actually entertaining enough. A very dense atmosphere, slightly distorted spoken vocals, a long drilling effect, all of them scream "I am power electronics that comes to kick your ass". The second and third tracks are made by the local resident and organizer Anemone Tube. If you are familiar with his music, you will recognize all the techniques that you love Anemone Tube for: a noise cacophonic background, lots of anxious special effects, human voices samples, almost no specific structure, and a wall of sound. Swallow the agony of steel.

After such a violent rape of the listeners' ears, comes Post Scriptvm to discharge an ambience a little bit with their dark and slow soundscapes. But don't expect any relaxation; this New-York based duo is all about claustrophobia and fear hiding in dark corners of human imagination. Horror is creeping out of their passages, freezing senses, stunning all the feelings, leaving no hope for salvation.

And on this stage, I get a cherry on the top of the cream, which was put there by Trepaneringspitualen, one of the strongest and craziest things that I've heard recently. I am truly disappointed that this project passed somehow nearby and I have a pleasure to taste it only through this wonderful compilation while what I hear from them is an evil, evil and once again evil death industrial in its best. Dirty and extremely dark, violent and dynamic, it has everything to love it for. Taking a strong occult and ritualistic approach, this band spills the blood of their victims all around. I remember also the other band that I really loved during the end of ninetieth which made something like Trepaneringspitualen, but unfortunately Valefor was lost in time. Two tracks that are involved in Epicurean Escapism warm me up before I receive their double cd album from Malignant records very soon (keep an eye on my upcoming review of the mentioned record).

To finish this sick journey, I dive into the depth of "Bethlehem" from Dieter Muh, the solo project of UK based sound artist Steve Cammack. Balancing on the edge of drone ambient and classical industrial, Dieter Muh builds a hypnotizing, but yet cinematic, soundscape full of mystery using acoustic sounds, percussion, metals, glass as well as spoken word. Twenty minutes long track carries listener towards the core of escapism to explore imaginary worlds beyond space and time.

I have to admit that even without attending the festival, this compilation and the video screening created by Mike Dando succeeded to convenience me that Stefan has the ultimate vision and the tradition of the festival has to be carried on and on. I I hope that next year this event will not lose its special gloss turning into an important milestone for the industrial music in general and will bring even more shine to the scene that usually keeps a low profile, but that is still full of talent and personality needed to be revealed.
# death-industrial
# power-electronics
# germany
# united-states
# england
# noise
Jul 02 2013
Psy'Aviah - 'Futurepast'
Previous article
Interview with The .invalid
Next article