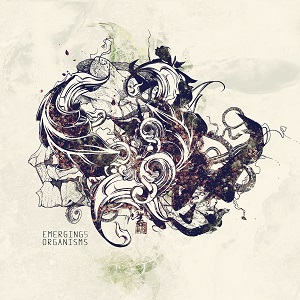 Spotify
Released 2014 by Tympanik Audio
Ambient, Experimental
Tympanik Audio is proud to present their latest compilation that features several new and established electronic music artists, and the two disc collection is . Thirty new and exclusive tracks completely show off the pool of talent that Tympanik has under their belt, as well as tagging along a few friends of the Tympanik family.

Dreissk starts off this ballad with Way Out, a lovely sounding epic, somewhat medieval in sound song. Piano notes are strung and play out with magnificence, altering the perception of the track as you head on through it. Giving in to a more grand feeling, the drum work kicks up the pump later on, and a blast of ambiance helps to shut out the track.

Atiq & Enk come in next with Revival. The haunting chants of what sounds like children of a disaster play in the background over a somber sounding spiel. The overall melodic and ominous feel plays all the way through, even though more optimistic beats pour through the track. Very well done.

The Empath comes in with electronic work that hits everything from slightly glitched notes to IDM. The drawn out synth work that weaves in and out of the beat every so often adds a fresh new feel to the overall play.

VNDL's Cosme manages to have a real low-fi ring to it, utilizing sounds of what would seem to be discarded technology being brought back to life, all the while managing a sort of balance between both the near future and the far distant future. It's a pleasure to listen to.

Roel Funcken's Chrone plays with a lot of fast paced mechanisms overtop spastic and glitching synth lines. It's as if he wanted to make a disorganized chaos that somehow worked harmoniously. And he did.

Ginormous' Slugs takes us back into the realm of flowing beats and electronic sounds, fluctuating rather nice bleeps and bloops in between clashes of bass and drums. It created a lovely addition to this piece.

Balkansky's Sleep Well hit in next. The slight pushes of electronic hits here and there served well over a main layer of synths and dropping bass. Slower, but still lovely, the IDM influences were easily seen and appreciated.

Ocoeur set out with a dark ambient feel to their song, which eventually broke out and involved itself in electronic work that came in and quickly dropped with a fading effect, sort of looping the playful experiment.

Blossom's White Deer kept going a sort of clapping like sound throughout its duration, manifesting into another slower but blissful track that kept the compilation both intriguing and fresh.

The Walton Hoax's Limitless was the first track on the album to have vocals included within it. With a throwback to sounds of a past era, and a soothing voice on top of a lot of other smooth electronics, this song was powerful.

Jan Amit's Ghostly Blossom played with an ambient background ring, exercising the electronics on top, including violin work, to create a bit of a classical but technologically twisted track.

Multicolor's A Special Moment, remixed by Lights Out Asia, featured acoustic instrumentation with a bit of annoying loop on the final note (which was gone around the one minute mark, spread open into another beautiful song that definitely earned its place right alongside every other artist on this compilation.

Frank Riggio's Fullof slowed down the pace by a lot, an echoing howl in the form of ambiance running through the entire track. Every so often, a hum from the mouth of one with a nice voice came through. By the end of the song, the notes died down, and drones took control, sweeping the song to a climax.

Displacer's Slow Blade crept out with a more ambiance that was barely touched with any other elements aside from more long and drawn out effects. Well done, nonetheless.

Blamstrain's Goodbye marked the half way point of the compilation, and was minimalist in its sound for a good portion of the first half. I heralded each note as it struck in, and even when a bit more electronic work came in, it was still lovely to listen to.

Zinovia immediately won me over with Blind as piano notes trembled down my spine, only to further fulfill that glorious feeling as it was beautifully accompanied by a modest following of electronic footsteps. Wonderful work.

c.db.sn brought forth a very well made track with drum work reigning supreme alongside sooth sounding acoustic instrumentation and gorgeous, though slight, electronic notes. Another well done track to add to the list.

Beginning off very dark, with barely a sound to its name, Huron's Survive eventually drifted in with IDM elements splaying all over the bleak sounds. And, this was the end of disc one, but, hold your horses, we have another disc to get through.

Adsol's Time came in with the whispers of what appears to be a little boy, with piano work and IDM sounds underneath a firm layer of static. Reaping out later with heavier notes and dramatic sounds, it formed into another winner.

Underfelt's Everybody Has Nightmares introduced some dubstep influences on a fairly quiet song, making use of each note to really hit off nice and strong.

Pleq and Marihiko Hara's Night Air relied on the effects of glitch for the first third of their song, ambient works touched by static and electronic element for the second third, and an amazing rhythmic noise section playing out to a grand scheme in the final third.

Tangent's Interpolating Waves brought with it a nice and lovely beat that rolled on just as their electronic work did, and I was not disappointed one bit with this track.

Dirk Geiger's Mrs. Alien rolled out a sample first, and let ambience take over for a majority of the song. Overwhelmingly spacious, going from one end of the spectrum, eventually the electronic work took over and granted us another well done track.

Miktek's Deep Dive Conversations came in with some out of this world, alarm like sounds mixed in with the rest of the IDM and ambient influences. Odd, but likable.

Comaduster's Car Crash at Sea hit in silently throughout, his almost emotionally tortured voice slithering in and out, coming as it so chose to echo with the music. Reverberating the high acclaim that has surrounded this artist for some time now, the overall song was excellent.

Idlefon's Stonefall worked its way slowly with samples and echoing sounds with a static screen covering some noises, perhaps relating most with the word creative.

Poordream's Flying Blind began off as you would expect a movie following one graceful animal or another on their journey to a better place. Eventually building off the more heavy notes and bass laden beats, the track took me on a thrill ride.

r.roo's Somno Diu Erit slowly worked its way up with strict ambient chords with an echoing beat every so often, working its way to a glorified and holy sound with reverberating samples.

Charles & The Fury's Fissions of You came in last, but that doesn't mean there isn't a whole lot to love. Finding a glorious balance between lovely synths, ambiance, and IDM sounds, the song relaxed and pleasured during its whole duration, setting this compilation to sleep on a final lullaby.

And, whether or not you're looking to really sit down and listen to a ton of IDM, electronic, and ambient music, you should really give this a listen. For a two disc compilation featuring exclusive tracks from established artists, and some artists that have never been heard of, this collection is one to drool over. Listen to it, and enjoy every sound that seeps out of your system and massages your soul, and soothes you down.
# tympanik-audio
# emerging-organisms-vol-5
# idm
# electronics
# ambient
# glitch
Oct 16 2014
Bad Pollyanna & Sophie Lancaster Foundation Launch 'Invincible Girl' Marking 7th Anniversary Of Tragic Murder
Previous article
Diversant:13 - 'Equinox'
Next article

Bandcamp
Various Artists - Spacesynth Revolutions, Episode One is available at POPONAUT from 9,95€

Various Artists - 'How to Influence and Destroy'