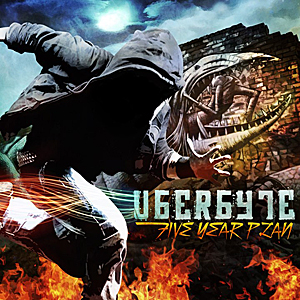 Spotify
Released 2012 by Vendetta Music
Electro, Industrial
Album of the Month September 2012 Album of the Year #3 2012
'Five Year Plan' is the new and fifth studio album from the UK based EBM/Industrial band Uberbyte formed in 2007, and released on the Vendetta Music label. The album follows 'NFY' (2011) and consists of 13 tracks, with tracks featuring Matt Fanale of Caustic and Lauren Krothe of Panzer AG. The release date is set as 16th October 2012.

Put your hands up for "Sheffield's Finest". It's so very hardcore techno and made for the dance floor, must be a definite floor filler in Sheffield, but I'm sure will do well elsewhere too. You will either love it or hate it, I like it its fun and what could be wrong with that, join in and enjoy it.

In complete contrast "Archetype" has such a very atmospheric synth start, slow and ballad like. It then builds quickly into a more futurepop sound, prominent drums and synths which gradually develop to match. This is beautiful and still atmospheric and features some nice male vocals. A great dance beat and melody, reminds me of VNV Nation to a point but if Runrig had made dance music this is what it would sound like. It's just got that uplifting feel good factor that all good danceable futurepop should have.

"Jump Into Hell" is next, and they certainly like to jump about, as again a very different track. The music is also very jumpstyle like but not quite to the Scooter "Jumping All Over The World" extent. But still very suitable for use in a Russian jumpstyle league. Whatever anybody else thinks the feel good factor for me remains and life is far too short to be a misery. The kids will love it so let's make sure they get to hear it.

I was hoping for a rest but not a chance of this with "We Like The Bass". As Scooter would say "J'adore Hardcore", but would probably be more accurately described as hardstyle, due to the hardtechno influence. The female vocals work very well with this kind of music as does the synth melody. Another club oriented floor filler for sure, which its pulsating rhythm also ensures. The beat, rhythm and melody are again very much made for jumping.

"Summer (feat. Lauren Krothe of Panzer AG)" strikes me as being very futurepop like, through its good drum beat, and again uplifting synths which combine well with Lauren's vocals. Techno beat driven and made for the club, a track to dance all night to and lose yourself in with its psy-trance quality. I must admit I thought I was listening to the Vengaboys for a moment at the start.

"The Serpent and the Cove" has a really good atmospheric build up, using male samples and synths, quickly turning to piano and then completing the synth build up into another dance track with nice male vocals and female backing. Again there is a very trance like quality coming through making for another club floor filler. It's musical form builds up and down throughout the track around the melodic vocals. The vocals in other words float amongst the synths, and it has a superb epic/anthem trance finale.

With "Threadhead" my first thoughts turn to hardcore but although the influence is there its a very different track once again, the most striking difference are the good rock like male vocals. Musically there is also a strong drum and bass influence. Not my favorite track so far, but I have to say how well this has all been put together and they still manage to pull it off and create a floor filler with a difference.

Once again the most striking thing about "Come Undone" is the clear and clean male vocals, which have a folk like quality about them. It starts with a real thumping drum beat which give way to the vocals but remains throughout. Very much an anthemic techno track which those vocals are made for. The excellent synths in fact turn it into an electro house anthem made for the dance floor.

A horror soundscape greets us in "Cthulu Waits" with drum and bass and use of effective male samples. It's kind of like breakbeat with a electro/trance like quality, although the pace is a little slow and so perhaps more Nu Skool Breaks as its certainly dark and heavy enough in places to fit that description. But its the first track that hasn't got a dance reaction so far.

"Unified" starts with a stomping dance beat accompanied by some more of those anthemic male vocals. All very intense, exhilarating and spirit raising reminding me of Culture Kultur. Very much synth driven and they and the good drum beat pull the vocals right through the track, they just so naturally lead the way. In this case the vocals more bounce gently over the synths, rather than float. I nearly forgot to mention that once again its another killer track for the dance floor.

"Get Thee Behind Me (feat Matt Fanale of Caustic)" and we really have gone Scooter crazy. An excellent and fun hard-dance floor filler. Real fun dance music not hard enough to be labelled as hardcore with a little bit of trance mixed in. Just jumping around fun stuff made for everyone with the child still in them and a sense of adventure. I will have this one ready for my next rave.

Well as they say 'Here you go America' and we bring you "Free (To Do As We Tell You)". More real dance orientated hardcore. The nice synth work is very noticeable as are the different slightly harsher and darker male vocals, which still remain clear. Those wonderful synths really drive this one once again, the vocals and synths turn it into much more than just a standard hardcore/hard-dance track, but it still retains the essence and innocence of such. Some really epic sounds in the last minute.

We finish with the track "2:7", which brings us a dance rhythm and beat eventually adding some male vocals and finally building into some electro house. Very electro-influenced in its use of synths and male samples, and a touch of industrial still manages to shine through. Would take up space in any decent trance and dance mix.


Conclusion:
This album really kept me guessing I really didn't know what to expect next. Every time I thought I was going to get Happy Hardcore I got something different, from futurepop to drum and bass, and all sorts in between, and so much I would not have expected. As it switched from hardcore to more melodic tracks, whatever the influences and genre of each track, each has the same nucleus and essence which is Uberbyte.

The highlight of the album for me is "Archetype", it has everything I want in a track, mostly made by the vocals and melody. The whole album is fun and has a feel good factor, and being a Scooter fan also helps. Even the fun tracks are strong in what they do, which is helped by the strong vocal performances in all. It will make a really great party album.

If I am asked to review an album like this I usually play the music and write in front of what seems like a growing audience, and I can honestly say by just their faces that they enjoyed this album as much as I did. So my recommendation is go ahead and buy it.
# uberbyte
# five-year-plan
# vendetta-music
# industrial-techno
# hardcore
# hardcore-techno
# futurepop
# jumpstyle
# hardtechno
# hardstyle
# drumand039nand039bass-
# hard-dance
Sep 06 2012
Carta d'Eritrea - 'Quattroquarti'
Previous article
High Level Static - 'Carrier Waves'
Next article

We don't have any stores registered for this release. Click here to search on Google
Uberbyte - Five Year Plan is available at POPONAUT from 15,95€