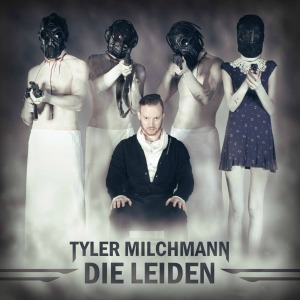 8.0
"Great"
N/A
Electroracle
Released off label 2014
Electro-Industrial
Released via Bandcamp last November, Ukrainian artist Tyler Milchmann's second album, Die Leiden (The Sufferings or The Sorrows) continues to improve upon his brand of aggressive orchestral electro-industrial mayhem, which marries Neue Deutsche Todeskunst morbidity to the hyper-masculine militarism and over-enunciated vocal stylings of Neue Deutsche Härte. The German and English lyrics, delivered with almost over-the-top theatricality, offer a demented grab bag of nihilism and misanthropy which is more than a little influenced by Rammstein's Till Lindemann. (In January 2014, Tyler released a song he composed for Till's poem, "Grossmutter," one of Lindemann's many odes to incest and necrophilia, from his 2002 book Messer.) Stylistically, the music borrows elements from neoclassical, darkwave, dark ambient, and folk, and the compositions are nothing if not busy--the rapid changes in instrumentation can be a little distracting at first, and sometimes Tyler seems to have so many balls in the air you can't help but wait for one to drop. On the plus side, however, the more you listen to the songs, the more little details you notice in them. For this album, Tyler brings back Natalia Abramova (who provided the female vocals in "Rauch über der Elbe" on his 2012 debut, Strange Days) for the songs "Das üble Blut" and "Choose Me," and Alexey "Shaddar" Romanchenko (of the Ukrainian black metal-turned-"Satanic pop metal" band Semargl), who recorded, mixed, and mastered both albums as well as played guitar.

The opening song and title track of this collection of grim fairy tales, which also happens to be one of the album's best, brings together powerful, operatic vocals, punishing percussion, and an Eastern European folk melody. An English translation of the song's last verse lays out what seems to be the album's central theme:

"It's not what we had dreamed about, my dear friend
We proposed, but God was the only one who disposed
An hour for torment has come
How ugly must God be
As he endowed me so richly with all this

A sample of Charles Manson saying "As long as there's hate in your heart, there'll be hate in the world" introduces the next song, "Nobody," which is sung in a mixture of German and English. Here, Tyler uses a harmonica to great effect after the line "I'm a box car and jug of wine." The harmonica isn't an instrument you expect to hear within the realm of industrial music (the only other act I can think of who used one is Click Click), but it perfectly suits the imagery of the lyrics. Milchmann achieves a similar effect in "Du bist Mörder, ich bin Mörder" ("You're a Murderer, I'm a Murderer"), a song about a death squad executing a parent and child with a circular saw. At several points in the song, most notably after the fifth verse, which contains the lyrics "Saw is squealing, it's looking forward to the meal/It wants to bite your Adam's apple," the music takes on a saw-like buzzing sound.

My favorite song on the album, "Bergsteiger" ("Mountain Climber" or "Mountaineer"), is a dancey number that relates the cheerful tale of a mountain climber who loses his shelter (and, from the sound of it, probably his girlfriend or wife, as well) in the wind, but decides to continue to the top anyway, knowing he will die there. The final verses translate as:

"Don't turn back, the loss is urging you
Pain will pass away, but the peak remains
The peak is waiting!

The next song, "Wenn Schmerz jäh spricht" ("When Pain Suddenly Speaks"), reminds me why I love the sound of the German language. There's something peculiarly satisfying about the sound of the words "nur dann" ("only then") that I can't really explain. Once again, the lyrics are well done, particularly:

"Corrupting on earth we suffer torments from evoking pain
Releasing us from slavery, from our comfortable empire of the dead...

A Middle Eastern melody played on what sounds like some type of flute permeates "Sand," a song that seems to have been inspired by the 2010 Rodrigo Cortés film, Buried. As in the movie, a truck driver is kidnapped, held for ransom, and buried alive in the sand, but in Tyler's version, the man is buried up to his neck instead of in a box under the ground. His wife finds him, but is unable to save him, and when help arrives, they're both found dead.

"Choose Me," which is about delusional people looking for love on the internet, is another song I like parts of--the guitar, the way Natalia sings "Are you alone again?" and some of Tyler's vocals--but the song as a whole doesn't do much for me.

The album gets back on track with the melancholy "Bewahre mich" ("Preserve Me") and its softly rolling "r"s. The way Tyler sings "bin ich" is simply lovely, and I like the sound of "Der Applaus begleicht Verlust" (which means something like "The applause settles loss"). The refrain translates as:

"So preserve me in your heart
Me, not the one who creates the evil pain
Whatever may come, do not grieve
I am not someone who lives in my body."

The next song, a rousing dance hit dedicated to domestic violence, takes its title from a pun on "Flitterwochen," the German word for "honeymoon." "Splitterwochen" literally means "weeks of splinters," and is intended to suggest a time when a marriage has started crumbling. The song opens with a distorted sample of Felix Mendelssohn's Wedding March from A Midsummer Night's Dream that sounds a bit like a broken record--nice touch! Anna Savchenko contributes the female vocals in this one.

The last two songs, "For Elise" and "No More Harm," are completely in English. After "Bergsteiger," "For Elise" is my favorite song on the album. It opens with a tinkling piano melody, and the lyrics describe some type of horrific cosmetic surgery performed without anesthesia. When Tyler sings "We are all waiters in the long line/to the operating room...Their saws squeal so loud," there is, once again, a sound in there that sounds like a whirring saw, and after he sings "They'll make incisions/they'll see all the malunions/inherited from childhood's sunny days," there's a sound like the chirping of crickets. This song is a little slice of perfection, as anything that contains the lines "I take off your skin as dress/We are naked, we are blessed" is almost destined to be. "No More Harm" begins with a music box melody, then turns sinister as an institutionalized mental patient looks forward to his release, promising to do no harm, at least "until the nightmares come," as, of course, we all know they will.

Die Leiden is definitely a solid release you won't want to miss, and Tyler is a rising talent to keep an eye (or ear) on. He's learned to play the organ for his next album, and the short clip on his Facebook page promises to be fantastic, so stay tuned!
# tyler-milchmann
# die-leiden
# electro-industrial
# orchestral
# neue-deutsche-todeskunst
Apr 14 2015
Proven Wrong At The Revel
Previous article
Fanum & Karna - 'Something Else'
Next article