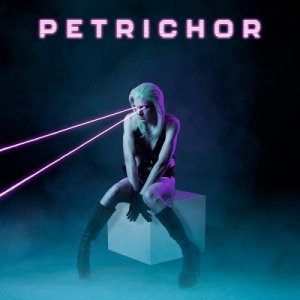 9.0
"Amazing"
Released 2021 by Nadanna
Italo Disco, Synthpop
Tobias Bernstrup returns for the second time on Nadanna Records, the label that is "dedicated to blurring the lines between minimal synth, Italo disco and electropop". A great tagline for a label releasing the works of the master blender of Italo disco and synthpop. Petrichor is the follow up to 2018's acclaimed Technophobia LP.

It has been about three years since Tobias Bernstrup's album Technophobic was released. Given the fact we are navigating our way through a global pandemic, it's always interesting to see what themes and experiences manifest in all of the music being created during these dark times. Tobias Bernstrup chooses to cover anything from personal experiences, cyberstalking to science fiction and into world events. Sometimes it's pretty straight-forward and other times you must seek out the best interpretation of what's being offered as source material.

Another theme at work centers around the Challenger tragedy. The song reflects on the loss of life the world witnessed in real time as the Space Shuttle Challenger disintegrated over the Atlantic Ocean shortly after the launch. I was in high school at the time when the announcement was made. It was a grim feeling and perhaps a bit too much for a teenager to digest and fully process.

Tobias Bernstrup takes a not so obvious approach to the track "I Am Become". At first look, you question the integrity of the grammar. It stems from a famous quote Robert Oppenheimer used from the Hindu scripture Bhagavad Gita to explain his witnessing of the first successful nuclear test in the desert of New Mexico. Robert Oppenheimer was the director of The Manhattan Project tasked with the development of the first nuclear weapon. When Oppenheimer stated this controversial quote "I am become death, the destroyer of worlds" it would become world renowned. The true meaning of the phase is still being debated. Did Oppenheimer take the quote out of context? That's a story for another time and not one we'll have here unless Tobias decides to tackle that on the next album. I really like this back door approach to an interesting topic. Bernstrup has done this many times before. One that stands out is from the album Sing My Body Electric from 2011 where Walt Whitman's Sing The Body Electric seems to be the center point for Bernstrup's point to explore the body as a whole. It certainly helps identify some meaning to the album's cover art.


There are times when certain things stimulate our senses. One of the strongest tracks is the title track called "Petrichor". Petrichor is the earthy smell after the rain. This scent reminds our protagonist of a time where they felt so alive as well as so alone. These scents trigger our memories throughout our lives. Sometimes they are wonderful memories and other times they bring sadness upon us.

The themes are generally open to interpretation, but I think many of them seem to take a somber approach. There is plenty of self-reflection relating to personal moments that allow us to know just enough to not be enough. This technique allows us to form a stronger bond to the song.

Musically, Tobias Bernstrup is the benchmark for infusing several genres to forge a sound that is derivative of no one. The style is generally tethered to the Italo disco genre, however, along with all the Italo influences there are strong bonds with synthpop, electropop and even a hint of synthwave felt on the instrumental "Loderunner". Every track is built methodically to match to the theme, the vocals and intended vibe. There is warmth as well as chills that bring the sound alive. The backing layers provide strength and depth to the overall final versions we hear on Petrichor. The palpitating bass power provides plenty of high energy BPMs for the highs, and a multitude of crafty synthwork pieces that can take us back down.

Years back Tobias Bernstrup collaborated with Confrontational to create one of the best cover tunes of recent memory with "Boys (Summertime Love)" by the talented and stunning Sabrina Salerno. Once again we return to the 80's for the next stop on the cover express with Red 7's classic 80's hit "Heartbeat". Red 7 was a short-lived act founded in 1984 . They gained a lot of attention with "Heartbeat" which was featured in the Michael Mann 1986 thriller, Manhunter (precursor to The Silence Of The Lambs ) as well as an episode of Miami Vice which also had the fingerprints of Michael Mann on it. Tobias Bernstrup's version strips the prototypical 80's vibe down from the original and revamps it with a retro-modern touch that fits well with the overall flow of Petrichor.

The remixes are all well done. I am not usually a fan of adding several remixes to the CD version, but I get it. It is a chance to cross-promote label mates and other artists. The remixers all do a nice job with their selected tracks, but it just seemed a little too long.

I really dig what I I've heard from SanFranDisko thus far, but I feel this remix is too close to the original. I felt the same way with DMT Berzerk's remix. Both artists add their flair and both songs do sound awesome. We The North is relatively new to me. There is a heavy sound in the mix, yet the overall feel is very soft and melodic and those qualities really stand out. The new single Exil was just released and it parallels the style of the "Private Eye" remix. Qual's (aka William Maybelline of Lebanon Hanover) experimental industrial rendition of "Private Eye" sounds filthy and evil like a seance gone completely off the rails with distorted demonic vocals. It feels like a descent into fires of hell. Yes, that's a compliment. Qual has no problem getting a little weird with his sound. Perhaps Qual is for all of the ideas that don't fit with Lebanon Hanover? Xeno & Oaklander  (Sean McBride aka Martial Canterel and Liz Wendelbo) add their bleeps and blips to the sordid themes of "Stranger". There is a quickness to the beat and plenty of airy synth work to leave the listener in awe. Doruk Ozturkcan is known primarily for being involved in the darkwave sensation She Past Away. In addition to his duties with She Past Away, Doruk works with artists from a technical perspective with mastering services as well as remixing services. Under his moniker Supermatik he provides a remix of the uplifting "Only One" as well as mastering the entire Petrichor album. Finally, Ash Code takes their vast experience in the synthpop/darkwave realm to work on "I Am Become". I guess being familiar with Ash Code unlike SanFranDisko or DMT Berzerk allowed me see a little bit deeper into the subtleties of their remix. I knew what to look for so to speak. With SanFranDisko and DMT Berzerk it was a brand new experience. Anyway, Ash Code add some darker sound layers to their version which gives it some separation from the album version.

Overall I enjoyed the way Tobias Bernstrup approached the designing of Petrichor. The music, the vocals, the lyrical themes all worked in harmony to create another top notch release. Tobias continues to utilize a mystical ability to connect with the listeners. Tracks like "Petrichor", "Into Oblivion" and "Only One" will stay with me as they pulled me into a place that seemed to echo the message I was hearing these songs.

I'm sure we'll hear about this album on several top 20 lists in a few months. It's that good. Of course Nadanna Records will be more than happy to process your Petrichor orders as well anything else the on the growing roster of talented artists.

Poponaut
Tobias Bernstrup - Technophobic is available at POPONAUT from 14,45€