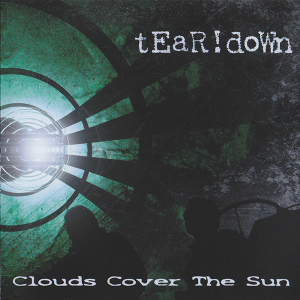 8.5
"Great"
N/A
Electroracle
Released 2013 by Electro Aggression Records
Electro-Industrial, EBM
The usual credits must precede this lengthy tome of a review, in order to familiarize ourselves with this project, if not at least form a basic understanding. tEaR!doWn (I really dont get the Ascii lettering, but I'll forgive them) consists of Oli Spring (vocalist from Sleepwalk) and Charly.

The 2008 demo 'Mind!Kick!' was astonishingly well composed and hit me like Chris Brown (complaints to info @ brutalresonance . com ) , and the exclusive contribution ('Tempting Harlots') to EAR's flagship box 'Old School Electrology Vol.1' left me with a want for more - but denied for years again. Finally, we get a proper album release, in the form of the label typical 2 disc compendium. A great title and decent cover art only amplifies the interest, but like Terminal State before it, this release will test and push your patience to the limit, slowly brooding and festering, before finally blossoming into a beast of a release - you have to put into it what you expect to get out of it, but not unlike a fine wine, this leaves an aftertaste that's not easily diluted.

So beginning with "A Tear Falls Down I" (the first disc ends with part II), the track echoes Front Line Assembly at their finest. A deeply robotic voice gives me something very spacey i'd expect from the Terminal State album, but this quickly merges with an appetizing soundscape. Leading into typically EBM style Bass, the track sounds more and more old-school, but actually has a rare epic feel to it. Possibly one of the best intros I have ever heard. Once that spoken word refrain of "a tear drops down and hits your face" kicks in, the album truly announces its intentions.

"Sign From Above" is atypically EBM - frantic and laden with great synth, Oliver's harsh vocal plays havoc to a jaunting and jovial mid-section. There isn't enough Old-School bands like this, and to this reviewer at least, this track is up there with Front 242, Autodafeh, Implant, you name it...

"Lost" is a gorgeous slow track with Ambient effects that One Eye Wanders would put out. It sounds almost like it should be music for being stranded on an island (ironically, title considered). As it picks up, the melody becomes a mainstay of the release - permeating my mind time and again.

One thing happening here a lot is the fusion of tracks combining other artists. Whether some of these are to be featured on EAR later is unknown, but they all fit the criteria. Nine Seconds in particular feature on "Disploded Visions". It's the most modern track on the album, with a few Synthpop elements.

"Insight" is as dark as the Joy Division track of the same name. Lyrically it appears to be a soliloquy documenting the protagonist's discontent with the way he has been treated. It's kind of a "you made me this way, you could have helped me" style track. With the previous track having lyrics like "cut me into pieces", there appears to be a self-loathing one-two here that perhaps represents the "clouds" covering the Sun. Dark stuff.

"This Cold Room" - Melodic synth leads into a fucked up concept. "Jagged needles inside my skin" - the track seems to be about drug use of some sort, if not a metaphor for "the end". It's fascinating how such an amazingly dark track is written with such a catchy melody. I love this, but Jesus, it's terrifying. I'll let you listen to it to see how the story ends.

"Burnt By The Sun" - Ouch. A nice Eastern instrumentation leads into a sample I've heard many times before. It's about War, and seems to have elements from Sun Tzu's classic. The track even carries this theme (I suspect unintentionally) with a "Ying" and a "Yang". It bursts into heavy Industrial hell, and calms down again. It's relevant to the concept of War, and a nice number indeed.

"Nerve Conflict" features Venetian Blind - an artist I've respected for a while due to his gorgeous IDM/Ambient instrumentals. It could almost be an interlude, due to it's slow and beautiful nature, but at 6:48, that's not gonna happen.

"Silent Noise" is quite the juxtaposition. Melodic and well structured, it's one of the highlights of the release. It features some shredding Guitar work which we'd associate with Metal, but they're used very sparingly, and actually this makes for one HELL of a track.

"Play Dead" features a female vocalist. For some reason I cannot work out who she is ( I am very sorry, Nader / Oli / Charly ), but she starts the song off with a gorgeous vocal. She does a duet on here with Oli, and it's interwoven with some ballad-esque music, and heavier synth. It's so up and down it could be an Elevator - but actually, this really works.

"Not from This World" is more Trancy and traditional. It starts as it begins, and although it doesn't deviate like its predecessors, it's a great track regardless.

"Melt Away" features Headcleaner. It starts with a sample "I want your complete attention" which signifies its intentions. It's probably one of my favourites on here - the utilization of traditional and addictive Synth makes for a slower number that hasn't failed to gain traction one iota.

"Would You Follow Me" features NoComment, and the "PolyRadah" gimmick (I used to own the CD/DVD of this act and remember digging it). Beautiful catchy Synthpop with female vocals provides the penultimate track to a disc that has surprised me consistently. Nothing else on here sounds like this.

Part II of "A Tear Falls Down" is the Antithesis of the opener. Stripped of the vocal work, it's more consequential in its experimentation, closing the door to a truly unique disc.


With Disc 2, I'll take the time to pick out a handful of remixes that I want to speak about. I liked them all to varying degrees, and as a complete package, they should all be admired for what they are.

Soillodge remixes "Addiction" - in an unusual move as the track isn't on the release. It's the project of Michael Renfield, (Ro1or) who's gathered a lot of pace working with bigger name artists. A good track with some really odd Bass that I love.

The famous Jihad (release something else, guys!) do an amazing mix of "This Cold Room". I can't even describe it, it's just fucking amazing. The track is also remixed by One Eye Wanders - there's truly nothing I can say. A beautiful genial project has remixed a beautiful, dark track. The results? *Makes a quivering noise*.

If I am honest, there's so many upcoming bands here that are full of talent. The established French act Brain Leisure, Pyrroline and Terminal State (who just released their excellent debuts on EAR), To Avoid and Synaptic Defect, and upcoming act Red+Test (Chris Lewis) - all of whom we need to hear more of. Amnistia, Framework, MC1R and Sleepwalk add to the credits, but really, this release is all about tEaR!doWn and their unique world.

EAR
tEaR!dOwN - Clouds Cover The Sun is available at POPONAUT from 19,45€

Sleepwalk - 'Revenge of the Lost'