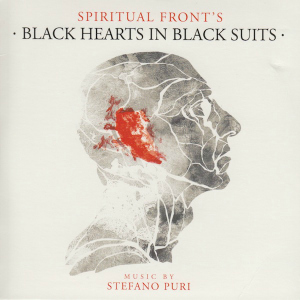 Spotify
Released 2013 by Rustblade
Neo-Classic, Neofolk
Album of the Month May 2014
In the age when making music became a very affordable process, when it's not labels which dictate musical tastes, but scattered communities of people control what should we love and adore, when "tailor made solutions" govern over our points of view, when the quality is sacrificed for sales ratings, when it is more popular to have diversity rather than quality, it is very hard to talk about something ultimate and solid, something that can remain in hearts of listeners for many and many years. Music becomes disconnected from artists and their visions too often today, for most of the people out there it becomes just some kind of a background without any depth or thought behind it. Depreciation of cultural valuables influences musical perception and taste as well. It is truly hard to come across a definite masterpiece which can survive any possible disaster or crisis, that can withstand any possible criticism. I am thankful to all saints who exist maybe somewhere out there, that those moments are still happening from time to time, maybe with less frequency, but this fact makes those moments even more precious. Did you ask yourself how many times you reached the level of pleasure from musical aesthetics when you believe that there is nothing in this world that can remain indifferent after playing the melody or song?

Late autumn brought a piece of plastic to my house, a piece washed with heavy rains, soaked with a cold breath of winter that hastened to conquer the world around. It took me around five months to find the right words and sometimes I wonder if such a small item can carry emotions so strong that can fire up the inner world of a person with a tornado of feelings and sensual experience. And if this is the question then the answer is in the new album of Spiritual Front called "Black Hearts in Black Suits". The band doesn't need any introduction being one of the most important and wonderful things that could have happen to the world of neofolk music. This Rome based formation rejoices the cockles of listeners' hearts for fifteen years already with a portfolio of dozen of albums and singles. I cannot say that everything was always so pink and delightful; there were some highs and lows on their thorny path and "Rotten Roma Casino" was quite a disappointment (for me at least). Though, with all the controversy behind, Spiritual Front always kept the level high, establishing their own face and sound in the world of multiply copycats. I still believe that "Armageddon Gigolo" is one of the best albums released in neofolk music so far.

But if one thought that with "Armageddon Gigolo" Spiritual Front reached the highest point of their development and it's only a downgrade from there, "Black Hearts in Black Suits" proves him being wrong with the full power of dark romanticism which flows out from each and every tune. The new album brings a lot of new currents into the musical river of our Italian comrades. First of all, the band presents an epic return of Stefano Puri, one of the most significant figures behind the success of "Armageddon Gigolo" and he definitely shows how much we missed him to inject the depth into the music of Spiritual Front. The second but not less important innovation presented though "Black Hearts" to the listeners is a total absence of guitars when piano melodies become the main driving force of the sound, the Alpha and Omega of the whole album. You can definitely say: "Common, without guitars it is not neofolk anymore" and you will be damn right. But this change gives an opportunity to break the borders of the specific genre which were very thin before even without this change. Spiritual Front had always a huge arsenal of different ideas that allowed them to include many instruments in their songs, making the music much wider and different from the classical neofolk. This time guitars are misplaced by the whole set of other string instruments like violins, violas and so on. And of course I cannot pass by without mentioning the choral support in all the songs of this album that adds a lot of passion and softness together with strength put on vocal sessions in order to sharp them even more.

With the changes made and the potential exploited, we receive the hell of an album. Using the visionary poetry of Rainer Werner Fassbinder, Simone Salvatori adapts it perfectly to meet the highest possible expectations. His voice became a trademark of the band and I can taste decadence and eternal melancholy in each and every word.

"...I will choose the death
That?s the way to love life
May this life would look like you
Every man has the right to fail
And you should grant it to me now?"

On one hand, the themes drawn by Simone and his beautiful voice are quite simple and common, but on the other hand they do receive a different perspective through the prism of sorrow and miserable love covered with a gothic touch, renunciation from the inner self towards the eternal desire, begging for forgiveness, finding peace for bleeding heart in carnal pleasures.

"...There's no forgiveness if you have denied yourself
Even if you are disgusted by me
Your life values more than mine
How could you love me or hate before you have comprehended me?"

Each song is divided by some kind of interlude, whether it's a piano melody excerpt or a choral singing, and this trick allocates each and every song to be an all-sufficient masterpiece together with being a part of the whole picture. All the details have their meanings in terms of love and hatred, passion and jealousy creating a true dramatic screenplay and a perfect soundtrack for love agony.

There is a lot of music out there. There are good albums, there are great albums and there are albums which stay with us like for ... eternity. If you seek for perfection, I am sure that you can find it in the new album from Simone Salvatori and Co. Put on your black suit, open a bottle of good wine and taste true decadence, taste the true feelings, get rid of the fake emotions, invest in the perfect experience. Don't forget about real valuables that make us feel our lives in their complexity and beauty.

Those of you that are fast enough can lay their hands on the deluxe addition which contains a vinyl and a 3CD with the original album, alternate versions of specific songs and a lot of fan memorabilia.
# neo-classic
# neofolk
# italy
# germany
May 10 2014
Lights Out, God Help Me - 'Dust'
Previous article
Troum - 'Syzygie'
Next article

Rustblade
Spiritual Front - Black Hearts In Black Suits is available at POPONAUT from 30,95€

Zeromancer - 'The Death of Romance'