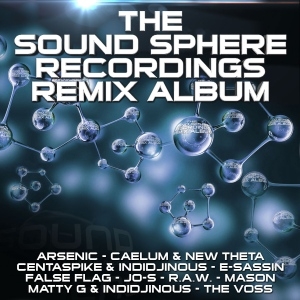 
Hello Europe, welcome to the Los Angeles drum and bass scene. Dark, techy and with a touch of metal mastering, Sound Sphere recordings has been putting out some of the snappiest dnb for 20 years. Yes, you read that right; there are djs, labels and incredible talent on the west coast of the US who have been pumping out beats for 20+ years, and Sound Sphere’s head, Eric Hull aka E-Sassin is one of the most revered in the city and amongst those in the know when it comes to drum and bass. To commemorate Sound Sphere’s 20th anniversary, E-Sassin recently released an album of classic Sound Sphere remixes.
Simply titled The Remix Album, Sound Sphere’s newest release features remixes of many of E-Sassin’s classic tracks by a range of well-known artists. Yes I did say “classic” and “range of well-known” in reference to U.S. dnb. Get used to it. Most readers of Brutal Resonance, being in Europe and the UK, probably don’t think of the United States and Los Angeles as a hotbed destination when the genre of drum and bass comes up. In point of fact, the U.S. has a veritable gallery of well-known drum and bass producers and djs and some of them have been around almost as long as their UK and European counterparts. In LA alone there are quite a few well-known staples such as production gurus Evol Intent, techstep-turned-neurofunk crew Wreck Ignition and one of the longest-running dnb weeklys anywhere, Respect.
Eric Hull/E-Sassin tends to keep to himself nowadays, allowing his metal-tinged tracks to speak for themselves and playing out only when the mood strikes him. Over the last 20 years, Hull has released at least that many of his own singles on Sound Sphere as well as singles from other artists like UFO! and Subcode. He’s had his work remixed by the likes of TeeBee and another LA legend, R.A.W. He’s also released on Moving Shadow and Dom & Roland Productions. His most popular track, “Abduction VIP,” was featured on the legendary Formation Records’ World of Drum and Bass 1999 compilation album. Not bad for a dj/producer who rarely promotes himself from a town which is rarely acknowledged for its drum and bass prowess.
The Remix Album released on Sound Sphere’s website on August 10 and was quickly picked up by Junodownload.com. 12 of E-Sassin’s tracks are remixed on the album, which covers a number of drum and bass subgenres and spans Sound Sphere’s 20-year history. Remix artists are not just from LA but all over the world, as far away as Australia. This shows the influence E-Sassin’s work has had on drum and bass the world over.
The Remix Album opens with a remix of one of E-Sassin’s earliest tracks, “Er Come” by Aussie native Centaspike and Indidjinous, who is from the San Fransicso Bay Area.  Originally a highly syncopated fusion of dark dnb and ragga, Centaspike and Indidjinous modernized this track but kept the syncopation and reggae-infused samples to make the remix easily recognizable as such. Next is “Malfunction” by LA transplant Jo-S, who has released several well-known tracks on the likes of Hospital Records, V Recordings and Metalheadz. “Malfunction” is an example of mid-to-late 90s dark drum and bass which typifies the era. Jo-S adds snares and atmospheric samples to E-Sassin’s classic track, but thoughtfully leaves the heavy, grinding bassline alone.
The production team of New Theta and Wreck Ignition’s Caelum remixed the third track, “Obsessed.” The rolling bassline of the original gives Caelum and New Theta the perfect base to get super-technical and add traces of neurofunk. Mainframe and Playaz artist The Voss has track number four, a redux/rebrand called “Nightstalker.” A heavy, rolling track, this seems to be a re-work of E-Sassin’s original “Nightrider.” Northern Arizona’s False Flag remixes the next track, “Full Circle.” With yet another of E-Sassin’s heavily syncopated beats to contend with, False Flag flips the bassline backwards and cuts it up, creating a track which is very much in keeping with the original style yet totally new and interesting.


The next track is featured three times on The Remix Album. “Soundstorm,” when it was originally created, had two versions. Track number six is a remix of the version E-Sassin did with R.A.W., and which has the jungle legend’s signature ragga beat mixed with E-Sassin’s dark bassline sensibilities. The remix by Matty J and Indidjinous once again keeps the original beat and bassline but brightens both up a bit for modern ears and adds a few samples and tone tweaks along the way. Sandwiched between two of the “Soundstorm” pieces is the “Microbes” remix by Mason. The original was ahead of its time with jumpy basslines and the beginnings of neurofunk. Mason uses these neuro tones as his main bassline and then adds a classic, snare-heavy beat to make an entirely different track. This is a definite highlight of the album.
The second remix of “Soundstorm” is of the original version E-Sassin did by himself, now remixed by his old production partner R.A.W. This remix is quintessential N20-era R.A.W. with snare-heavy jungle syncopation and minimal samples. Next, E-Sassin remixes one of his own tunes, “The Enemy.” With this track being at least 15 years old, it still resonates with jungle and dnb fans, but E-Sassin adds to it in the remix with more of the techy bassline as well and extra vox samples. He also brightens it up, making the mids a little more brassy for modern tastes. Fellow metal/dnb mashup fan Arsenic remixes the superfast techstep banger “Symptom” by adding a ravey buildup and a heavy break to the grinding bassline.
The Remix Album closes with the third remix of “Soundstorm,” also by R.A.W., and D-Star’s remix of “The Void.” Though this last version of “Soundstorm” is at 170 bpm, it’s hard to tell how fast it is because R.A.W. has stripped down the track, making it very minimal and atmospheric. It’s the most experimental-sounding track on the album and a complete surprise from this veteran dj and producer. Last but not least, “The Void,” available for free full download on the Sound Sphere site, shows the versatility of E-Sassin’s style as well as Philadelphia native D-Star’s creativity in remixing a classic jungle track like this. He’s able to keep the core of the jungle beat on the original but add extra bits to it to create a different style of ornamentation. It’s a great way to close out an album which spans two decades and countless styles.
Still think there’s no drum and bass in the U.S.? Well, LA and the rest of this snotty young country beg to differ. Sound Sphere’s The Remix Album shows not only the history of its own catalog, but of stateside dnb as well as the range of talent across the country. All these styles and subgenres may be filtered through the prism of E-Sassin’s long and storied career, but they also reveal an important cross-section of drum and bass in the U.S. The Remix Album can be streamed on Sound Sphere’s Soundcloud (button above), and is available for download on the Sound Sphere website or Junodownload.com.