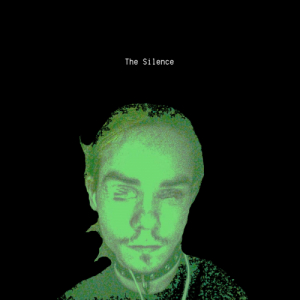 3.0
"Terrible"
Released off label 2020
Experimental, Industrial
SinThya is an experimental industrial artist with various influences from all around the underground electronic scenes including, but not limited to, darkwave, goth, industrial rock, and more. As far as I can see on the artist's Bandcamp page, their first release was a compilation titled "The Experimental Collection: Volume 1" which was put out in December of 2018. Since their inception, SinThya has been releasing music non-stop with outputs such as the compilation "The Experimental Collection: Volume 2", and singles such as 'ANALOG' featuring DEEP DOWN and 'Rabbit, Rabbit' decorating SinThya's discography. This has all culminated in SinThya's self-described artsy mixtape "The Silence".

The journey into an album, at least for me, always begins with the cover art. Whether purposefully or not, the cover art is a shoddily edited piece featuring the titular artist coated in a green tint cut and pasted in what I assume to be Photoshop or a similar service onto a black background. The title of the album sits above the artist's head and that's all there is to it. Perhaps the blackness around SinThya is meant to represent the title of the album; a loner in the midst of silence. Not too impressive but there's no points ever taken off for an album cover; it's just fun for me to explore.

However, the first problem I encountered with "The Silence" came when I read through the descriptive text on its Bandcamp page. Two of the themes on the album are listed as "throat slitting" and "sinning for fun". Now, I am not one to take a stab at people for their themes or what their albums are about; hell, some of the music that I love concerns aliens falling from the sky and dominating Earth in cliche, science fiction form. But, after reading that bit I felt myself cringe thinking about how edgy thirteen year old children would get excited about "throat slitting" and "sinning for fun". Perhaps there is more to it than just that, but if there is I don't see it. Again, there are no points taken off for this part but there are better ways to sell your music (which SinThya does very well by describing their genre influences later on in the same paragraph).

When I first hit the play button I was not thrilled with what hit my ears. 'hellomynameiscrazy' is a very basic song with what can only be described as circus-like organs playing as simple percussion kicks in. The vocals that come in are strained beyond reason and sound hollow; I felt as if someone was trying to imitate a stereotypical, creepy old woman in a horror-film but failed to achieve their goal. The simple, and quite boring, structure of the song maintains its presence for just five seconds over the seven minute mark and ends. 'Existential Solitude' can be described very similarly to 'hellomynameiscrazy' with organs coming in sponsored by the repetitive percussive elements once more. The vocals change up and sound extremely flat and out of key with the music that's playing. Again, not appealing for its short three minute duration.

'Too Long' was a song I completely skipped over on successive spins of the record thanks to a terrible, terrible high pitched note that did not settle well with my ears. It's sad, too, because the looping guitar groove and SinThya's spoken word delivery was very well done on this song. But, because of that note, I abhorred this track. 'Noise_song' is an experimental track where SinThya's growling comes out to play. I wasn't a huge fan of the faux screaming but again found myself enjoying SinThya's spoken word. I think the mixing on 'Noise_song' was off, however, as SinThya's voice overpowered the music in the background.

The title track 'The Silence' is the closest thing on the album that I came across to being an enjoyable experience. A steady, lo-fi beat with ominous synths and deliberate slow pacing was going somewhere. But SinThya needs to improve their rhythmic chords as their voice does not deserve my attention. And, again, throughout its four-and-a-half minute duration nothing in the song changes up much. Two different voices with the same looping and repetitive beat plays. The little electronic bloops that come later in the song (around the three-and-a-half minute mark) worsened my opinion as they were simply out of place.


By the time I reached 'Judgmental Eyes' I was worn from listening to the album. I can hold the same thoughts for 'Judgmental Eyes' as I did for a few of the other songs; not a terrible rhythm but one that doesn't change up much throughout its duration and thus becomes boring and repetitious. And, again, the vocals need work as they sound off beat. 'Rabbit, Rabbit', the final song on the album, had an noisy EBM influence to it. I listened to it once on my first pass through of the album and then found the eight-and-a-half minute duration to be torturous.

The bottom line here is that SinThya needs to take a step back and learn more about creating music. In the descriptive text found on their Bandcamp page, SinThya states that they're influenced by early industrial albums of the 80s and the 90s. In comparison to the complex sound designs and engaging material found within the works of classic artists such as Cabaret Voltaire, Skinny Puppy, or Coil (just to cover a range of different industrial artists), SinThya's music is neither intricate nor admirable. It's an amateur production which is worse than some demo submissions I've received in my years on Brutal.

However, I do not like to be a pessimist (anymore) in the endings of my reviews. SinThya is passionate about making music, let's be clear about that. Since their inception in 2017 the amount of singles and EPs they've put together is astonishing. SinThya needs to educate themselves and learn how to produce music whether it's through trial and error or by hiring electronic coaches and taking singing lessons. The persistence is there; SinThya has that locked down. They just need to harness their excitement for a more tangible product.

Bandcamp
Sweep - Two Players is available at POPONAUT from 12,95€

SHIV-R - 'MINIVIEW: Eye of the Needle'