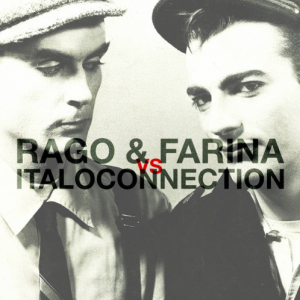 9.0
"Amazing"
Released 2021 by Nadanna
Italo Disco, Synthpop
Francesco Rago and Gianluigi Farina are the legendary collaborators that brought us several iconic and highly memorable tunes from rise of Italo Disco in the early 80's. Of all the monikers used by Rago & Farina, 'Lectric Workers probably stands out as being the most well known with the addictive and eternally reissued hit, "Robot is Systematic". Originally released in 1982 on Discomagic Records, the track is literally on every Italo compilation out there. Okay, so I am exaggerating a little. Along with 'Lectric Workers, Rago & Farina released music as Atelier Folie, Cariocas, Pleasure Discipline, Wanexa, Decadance, Expansives and Message From The Future.

Who is Italoconnection? How do they fit into this release? Italoconnection is the duo of Fred Ventura and Paolo Gozzetti. This release is a tribute to the years of friendship these artists share. It's a fun and exiting journey down memory lane that showcases the remixing, reworking and production skills of Rago, Farina, Ventura and Gozzetti. There is also a very special guest appearance by none other than Flemming Dalum, who is a gifted producer as well as a record collector with a huge devotion to Italo Disco.

So, Nadanna scored here big time. Not only did they get a CD release of this classic collaboration, they also have some bonus tracks not found on the digital release. Rago & Farina vs Italoconnection is a perfect blend of the past and the present that will hopefully pull in some new fans with it's crafty reworking and excellent production.

Lets explore Atelier Folie. We have six tracks produced under this moniker by Rago & Farina. "No Rhyme No Reason" was originally released in 1983 on 7" and 12" on WEA. There are two versions. The first rework is done by Italoconnection and the second is a 'Lectric Workers as the Dub rework. "No Rhyme No Reason" kicks off this Italo-banger. It's the Italoconnection rework that sets the exceptions for the listener. Everything from the robust bass bumps, the imposing backing synths and of course the crisp well-produced vocals sets us up for what's to follow. It's kind of like the old cartoons when the lead character smells the pie cooling in the window, the scent elevates them to follow that very scent to its source. The Dub rework reveals that deep pronounced bass that is prevalent throughout the release as well some cool echoing effects the give this a very nice edge. Italoconnection also strikes on "Freedom Time" and "Leave Me Alone". Like all tracks Rago & Farina have an enviable ability to build out a dance track laced with plenty of energy that pulls the listener in with wild hooks and addictive beats and warm imagery that emanates from classic Italo Disco sound. Italoconnection can add their golden touch and raise the level of intensity to anything. These songs are all classics. Sometimes reworking a classic can work against the artist's attempt to reinterpret it. Ventura and Gozzetti have the street cred to pull this off and they F**king nail it on everything they touch!!! Both "Leave Me Alone" and Freedom Time" sound as if the were ripped right out the 80's, however they are newer tracks that came out between 2013 and 2017. Also included with Atelier Folie tracks is the original club mix of "Freedom Time" which will allow you compare the wizard-like powers of Ventura and Gozzetti vs the original mix. Under the moniker Atelier Folie, the hit "Walking in the Neon" was written by Rago & Farina and performed by Peter Richard. Italoconnection and Atelier Folie air this out with some wicked spacey sounds set to a thumping fat bass. Imagine taking some sound clips from a 1950's movie about alien invasion and amping it up with a menacing bassline and pronounced synthwork as the erie UFO sound clip rips through the foreground of the song. What's not to like? Perhaps my description only?  Since we are on the topic of "Walking In The Neon", Italo historian, DJ, Collector, collaborator, remixer, producer etc etc Flemming Dalum shreds out a tribute track in his own unique way. Like Italoconnection, anything linked to Flemming Dalum is awe inspiring and a schooling on how to do an incredible reworking of another classic! His version is vastly different than the Atelier Folie version remixed by Italoconnection and yet as different as it is, it certainly fits in with everything else here.


Other names Rago & Farina worked under were Expansives and Decadance. The Expansives track "Life With You" was originally released back in 1982 on Leader Records. This is quite the collectors' item as well. The Italoconnection rework of "Life With You" spikes the sound up and adds a shot of adrenaline while focusing more emphasis on that memorable groaning backing sound. Everything together makes another impressive version brought to life by Italoconnection. Decadance released "On And On" in 1983 on Proto Records. Of course it features 2 more stellar Italoconnection reworkings.

The last tracks include Italoconnection "Unbelievable" featuring non other than Francesco Rago adding his skills to the Italoconnection tune. Again, more memorable choruses and addictive beats with hooks that could pull in the wildest of Blue Fins. Last but not least we finally get a track by 'Lectric Workers and it is not "Robot Is Systematic". The track is "Borealis". There's an airy feel to it while the ominous beat creeps at you relentlessly. The synths are like a drug pulling you into fabric and inner workings of the music. "Borealis" is quite different than anything else on this release. It's slower and not a high energy assault. It's antithesis of everything on here. The repetitive beat paired with a synth sound that yields to the warmth of traditional Italo Disco to something a bit darker. Somehow it fits nicely into the whole.

Every artist plays a significant role making this a unique and fun collaboration of tribute and friendship throughout the years. As the years go by, it's nice that all of these artists get together and keep the Italo sound alive and well. If this release doesn't have you seeking out more work by these luminaries then nothing will. Perhaps it was never meant to be.


All of the original mixes are great as they are. I found it refreshing to hear alternate takes on the classics that sound just as awesome as the original, yet have the creative DNA of the reworkers built into their assignments.  Support the artists and visit Italoconnection and Nadanna on Bandcamp to purchase the digital or CD versions. Following Flemming Dalum on Facebook is always a treat. It's a great way to get tips on new releases and hear some of the best remixes ever! Stay gold and enjoy!

Poponaut
Fractured - Beneath The Ashes is available at POPONAUT from 13,45€