Pretty Addicted - It All Stems From Childhood 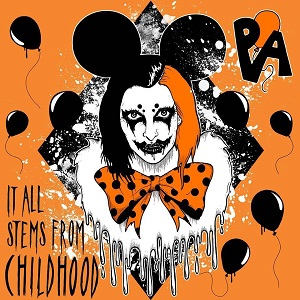 Spotify
Released off label 2014
Dark Electro
Album of the Month August 2014 Album of the Year #7 2014
I remember when Pretty Addicted released Filth last year; coming out of nowhere, a no-name act soon blossomed into a fairly well known band with trademark trance elements combined with a dark electro feel. Happy and yet serious, drug laden lyrics and songs that you'd probably be embarrassed to play for your grandmother pounded right off the record and out of anyone's lucky speakers which happened to get caught up in this product of both chaos and love.

However, if there was any one song that really stuck out to me as a favorite since the album's release, it would have to be that of Clown. A sort of anthem for all us freaks out there who have ever suffered any form of verbal or physical abuse for the way we dress, talk, or even act has been included in my personal playlist ever since I first listened to it. The powerful lyrics combined with hateful spite, and a personal grudge against all those who feel the improper need to judge against those who choose a nonlinear path was absolutely inspiring.

In continuing that trend, to both herself and hopefully others who have felt the pain of ridicule for just simply trying to be themselves has become a labor of love and pain from none other than Vicious Precious, the sole person responsible for demonstrating her wizardry with electronical elements ranging from anything to everything. Serving as both a personal method of healing, to straighten out issues that have bothered her since early childhood, to trying to be the type of role model that others who have felt this pain and look up to, this dude has slammed out another album worthy of major attention and a lot of praise.

I'll admit, I've read a few places that some didn't know how Filth could have been topped, but Vicious is back, angrier than ever with plenty of malice backing her voice, and a hardcore dance beat that can get all that pent up anger out on the dance floor by jumping, stomping, and just absolutely throwing yourself straight into the groove of things. This is an album you can unwind to; an album in which you can lose all self control while feeling a sense of relaxation and peace.

The album's title is extremely well played off with the intro track, using the basic tune from "The Teapot Song" to introduce the first few seconds before cancelling out into noise. Slowly, from there, a beat is built up through slow bass. A nice little marching like rhythm builds up, which serves perfectly as Vicious sings off about being forced to follow orders from an imposing authoritarian figure. The song slowly moves from that to a slower, but more electronic focused beat. A little after the half way mark, an absolute gem of a synth line takes over the background and stands out as a moment where my hair stood up on the back of my neck. Already establishing a great first tune, I was beyond excited to continue through this album.

Scapegoat hit up next, and was said to be a lovely song dedicated to Vicious' mother, who constantly blamed her for everything throughout her life. The pure animosity is echoed even further in this song; the vocals and lyrical content reflecting every single ounce of resentment one may have for another. The synth work was outstanding once more, and the tune, though taking on a more bitter output, still managed to kick out a lovely dance track.

Most fans are familiar with the next track, Mania, as it was released as a single some time before the official album dropped to get you wet for the full release. And, while it did manage to whet my appetite, hearing it in unison with the rest of the album surrounding it in all its glory just raised its standards even more. Trance elements stick out like no tomorrow, and there is absolutely nothing wrong with that. I loved it, and I can assure you that you probably will love it as well.

A bit of a scratchy intro with some noise opened the next song, Into The Abyss, which lead right into another electronic fueled stretch of madness. The piano that accompanies the beat for the chorus offered something grand and new all at once, and the little peace and quiet from about the three to four minute mark offered a grand piece that built right back up into the main bulk of the song. Four tracks in, and I'm in love.

Monkeys In Space was one of the songs where a bit more fun was had; it was pretty much about being fucked on drugs. But, hell, after so much serious business, it was time for a bit of a lighter in heart romp to join in the fray. However, that certainly does not mean that the quality of music dropped in any sense of the word; this was another substantial effort brought forth on the album.

Drums helped carry Circus Of The Depraved to fruition, slowing the pace of the song by a large margin. A bit of an ambient structure was implemented in the leisure styled song. Each note made a sturdy hit on the aural senses, each sound perforated the ears like no other song. The passive sound of the song allowed each note to hit beautifully and gradually, and more was absorbed in this song. A different paced song changed things up, but that was short lived.

Sluggishly resuming into a moderate pace, Can't Bare To Look doesn't really slam right back into the fast velocity as a few of the other songs, but the vocals are clear cut and very enticing. The best parts of this song were when the trance like synths accompanied Vicious' playful chords, allowing for an orchestra of pleasantries to shoot the senses with unnerving joy.

And, ah, See No Future kicked the song right back up, and rather than going for a pissed off vocal tone, Vicious used her wonderful voice box to sing a bit and the results were both different and astounding; I never doubted this one's knack for being able to sing, but to actually hear it presented in song was extremely appealing.

Bringing forth a song that could very well play at a party where everyone is absolutely pissed, KidRave just isn't something you want playing at your five year old's birthday party. Very fun with a tribal feel going on with the drum work, this second to last track hit hard and lovely just like each one before it.

And then we were hit with an interlude that preceded See You On The Other Side. More of Vicious' singing came across with no other musical implementation for a full minute, and it was adorable to get through. This was right before the final track came on. And, well, a bi polar song really awaited you. At one point slow and moving, with Vicious once more singing, it skips from fast paced drum'n'bass, to slow and somber melodies powered by nothing but a single synth line, to the end of the song playing off both these attributes and slamming home one of the best albums I've heard in 2014.

And, damned if I am if I didn't just listen to one hell of an album. This album can really be acquainted to that of a best friend; you can laugh with it, cry with it, and even be mad as hell with it, but no matter what emotional phase you're going through, you always feel as if the album itself is right there alongside you, never disagreeing with you, and urging you to bash a mother fucker's face in. A full hour of absolute sentimental release was unleashed in this twelve track monster.

Vicious really pushed her ass hard, driving out not only a fan service, but also steering forth a sort of therapy for herself. Through this personal goal, this relentless search for a cure to all things that really have bother her since she was young, she managed to slam out a glorious sixty minute dance album that was both exploratory and moving at the same time. The harder you work, the better the result it. And that is a practice Vicious has absolutely mastered at this stage in her career. I don't know where she'll go next, but knowing that she cranked out not one, but two absolutely fucking amazing albums is a feat that some artists can only dream of. Keep on keeping on Vicious; you're the type of person who will serve as a role model to many in the years to come.
# pretty-addicted
# it-all-stems-from-childhood
# dark-electro
# trance
# dance
Aug 08 2014
Neonsol - 'Citadel'
Previous article
Cyferdyne - 'Keep Your Silence'
Next article