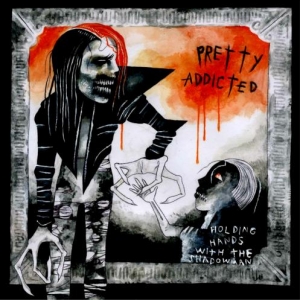 Spotify
Released off label 2016
Dark Electro
Album of the Year #15 2016
I have a gigantic hard on for Pretty Addicted and that should be noted by my past reviews for their albums Filth and It All Stems From Childhood. Not everyone would get that I'm very picky when it comes to the music I personally listen to when I'm not typing out reviews for Brutal Resonance; out of every ten to fifteen albums I review, only one or two of those will stay in steady rotation on my playlist. Every album from Pretty Addicted that I have ever had the good grace to pass through my ears has been listened to more times that I can count. Whether it was Filth introducing us all to Pretty Addicted with slammers such as 'Clown' and 'Fetish Factory' or It All Stems From Childhood with emotionally charged and awe-inspiring lyrics, Pretty Addicted has not made one bad move since they started.

And, I guess the reason why I love Vicious Precious' genius so much is because they are the living embodiment of their music. A lot of musicians out there keep their stage persona on stage and keep their personal life located in the real world. However, Vicious Precious and Pretty Addicted are synonymous with one another; if you talk about Vicious Precious you're also talking about Pretty Addicted and vice versa. The way they live, the way they talk, the way they present themselves are all presented from heart and soul. They cater to outcasts and freaks and deliver a powerful message of always being yourself and say fuck it to trying to fit in.

With each passing album, Pretty Addicted gets better and better at honing their craft and their latest album Holding Hands With The Shadow Man is no different. As soon as the cover art for the album was released I was already in love; a dark and ghastly version of Vicious stands on the cover with hands that are more like claws about to grasp the hand of a younger person who looks scared out of their mind. However, as the figure stands outside of the picture frame on the front cover and the child is caught on the inside in darkness, I feel as if the monstrous figure is helping this young child realize they are stronger than they think and there is hope to get out of a stagnant situation. As usual, I may be looking too much into it, but a picture is worth a thousand words and this is just my two cents on it. Plus, the cover art also reminds me of the Scary Stories To Tell In The Dark series that I beloved when I was a child.

That being said the first single that was delivered by Pretty Addicted 'Choose Your Poison' was an absolute delight when it came out and it's still just as delicious in the present. Proving that Pretty Addicted is full of Gothic Dance Music set and ready for the club environment, 'Choose Your Poison' slams in home and again reels in personal issues that anyone can relate to. From the title of the song, you can pretty much tell - unless you're an idiotic douche - that the song correlates to alcoholism.


'Gutter Heroes' starts off with glitched out samples of what sounds like a young child trying to sing. This is taken away as Vicious comes in with their tremendous lyricism and their lovely but angry voice. The references to the Rabbit Hole are also well appreciated. 'Friends In My Head' is a softer song that's slowed down and plays with elements of drum'n'bass. The lyrics are sung in spitfire fashion and the mood of the track goes well with the overall theme and title.

'Little One' sounded like another personal song wherein themes of isolationism and finding yourself are involved. That being said the song gave me goosebumps and was perhaps one of the best tracks on the album thus far. I think that the next track 'Little Song' is a follow up track to the previous. It features an almost demonic voice asking another person to play them a song about missing them. They try to resist at first but eventually succumb to it. Some ambient fields are also played behind the track and it is quite spooky.

'Monster (Inside The House)' showcases what Vicious can do when they sing with clear vocals. The dreamy, slow synths and random noises all make the song a ton better. There's even a scent of sadness that Vicious has in their voice - and that's something that shocks me as Vicious usually has a strong, powerful voice that never shakes or breaks for nothing. Nonetheless, 'Monster (Inside The House)' has become perhaps one of the most impassioned songs to come from Pretty Addicted thus far.

But do not fret, 'Dogma Breath' kicks back in the club riddled beats and technically savvy electronic works which is followed by the equally fiery track 'Piggy'. The latter track made me laugh when I heard the sampled snorts of a pig in the middle of the track. The electronics take a back seat to wicked drums and other percussion based instruments on 'Suckerpunch' and that was another welcome break.

'Tic Tac Toe' used childhood like noises to introduce itself until a sludgy, grinding noise took over with dark, spoken word lyricism and poet-like lyrics took over. Sampled cackling and Vicious' onomatopoeia keeps a dark curiosity looming over the song for its duration and I adored it all.

Perhaps coming in as the song that will dominate the Gothic club scene out of all the songs on this album is 'Midnight Johnny'. The final song on the album 'Numb At The Core' lays out a crunchy electronic beat followed by fast paced rhythms and lyrics that follow suit. The final half minute of the song culminates electronics, drums, noise, and just a giant wall of sound before slowly dispersing out with various samples and a final farewell word from Vicious, "Prick.'

Pretty Addicted's Holding Hands With The Shadow Man is astonishing just like the previous two albums. While much of the album is up to interpretation and a lot of what I wrote is based on mere speculation, I think anyone and everyone who listens to this album will find various reasons to come back to it. Whether you connect with the songs on an intimate basis or just adore the music that extends its hand to you, Vicious has outdone my expectations.

The album is available to purchase both physically via Big Cartel and digitally via Bandcamp with the links to your right. Go get addicted to Pretty Addicted.

Pretty Addicted - 'It All Stems From Childhood'