Parasite of God - Outcasts and Freaks 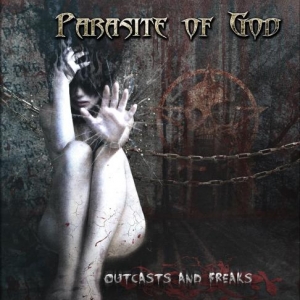 8.5
"Great"
N/A
Electroracle
Released 2016 by Xperiment XIII
Aggrotech
Album of the Year #22 2016
I find it rare that I hop aboard a hype train when a musician announces an album release date, a sudden release of a single, or anything of the sort. Most of the time, I note it in the back of my mind and then that mental record becomes lost and vanished for a very, very long time until said album resurfaces or crosses path with myself. Then again, there are the one-in-a-million albums that have me on my feet till the very day that they release. This is exactly the type of album Parasite of God's "Outcasts and Freaks" is to me.

It was about two  years ago that PoG first began to pop up across various sites through fans and media alike when the Swedish band released the single/video  "Breaking the Girl". From there on out, a steady release of singles followed; "Virgin Blood" released in March of 2014 featuring dancer Ciwana Black,  "Outcast" came out in July of 2014, and much more recently - just three weeks ago, "Through Sorrows" came out to much fanfare.

Somewhere between all that, PoG caught the attention of goth and industrial label Xperiment XIII, who then promptly signed the band noting their musical talents and visual flair. Speed up to 2016 and you will find that this Swedish harsh electro act has finally collected and mastered their songs together to set a release date of March 30, 2016 for "Outcasts and Freaks". That is over two and a half months away, and this is a very, very early review of the album, but more people need to know about this band.

The digital album is pretty clear and cut; you get the ten songs and that's that. However, the physical version is a true burden of love. Along with the first disc that contains all the tracks available on the digital version, a second disc is available complete with fourteen additional remixes from a ton of very, very talented folks. Along with the awesome music, you'll also be on the receiving end of a band autographed A6 postcard, five fridge magnets, 2 stickers, and a Keyring torch (but that's only if you're one of the first thirty orders).

Now, the music itself is just completely stellar. Their single 'Outcast' begins off the album and it has been reworked since it first debuted in July 2014. There's a heavier emphasis on guitars, as well as a few additionally punchy electronic elements. The vocals, the combating clear, female vocals and screechy, demonic chords largely remain the same, though a few new digital tricks do play out.

'In The Shadows' keeps up PoG's trademark harsh electronics and trance mix up, however, the lead vocalist also sings and just doesn't scream. While that does sound odd, he's able to pull it off very, very well. Swooping in with awesome synth leads and an aurally blasting beat, 'Breaking the Girl' keeps the rhythm thumping and your feet moving. 'Vanta Black' rids itself of guitar work and comes off a little softer than the other songs, but still just as catchy.

Coming to the mid section of the first disc, 'Legion' carries on with PoG's brutal electronic assault. It's clear by now that PoG isn't going to stop blasting beats throughout the rest of the album, and I don't think I would want it any other way. The next song, though just recently released as stated above, is perhaps the best track on the album. With the destructive chords of the lead singer again going back and forth and even in synchronization with vocalist Johanna's tongue, the completely dance heavy and trance laden track is an absolute blast.

I enjoyed the build up in 'Virgin Blood', as it is slow, soft, but leads into a vicious and speedy electrometal shockwave. 'Black Widow' returns the clean and harsh dueling vocals of the lead singer once more, and includes some wicked work with the keys. 'Nine' is perhaps one of the simpler songs on the album, coming off more as an EBM track. It does sound a tad out of place, but that does not make it any less enjoyable. 'Fucked Up' serves as the last track on disc one and it does not disappoint, leading out the audience and listeners in one final devastating storm on our ears.

That ends the first disc, and begins the second remix disc. There are five songs that are remixed, which are 'Black Widow', 'In The Shadows', 'Breaking The Girl', 'Through Sorrows', and 'Virgin Blood'. Starting with 'Black Widow', I'll be grouping the remixes and talking about each separate remix for the song individually.

Starting off with Valhall's 'WEBSPINNER Remix', the Swedish witch house duo transforms the song into a wonky electro song that blends their trademark sounds with a pulsing beat. The screeches are also transformed into robotic like vocals.

Obsidian FX's remix of the track makes it darker and dirtier, and a bit more mystical. The beats are much more stinging, and the track gets a sinister appeal to it.

Acylum takes the song and breaks it into a monster of a harsh electro song. Though the original song was already rough, this remix makes it much more punishing.

'In The Shadows' Remixes:

Witch house/industrial project The Left Hand of Creation slows the beat of 'In The Shadows' way down, glitches the guitar, and adds an echo effect in on the vocals. Drum'n'bass comes in the later half of the song to good effect; this is a song that moves, lives, and breathes as it goes.

Fellow label mate Cellhavoc unleashes havoc on with their remix of the track. While it does maintain the same flow and pace as the original, the electronics are reworked and sound lovely.

Ironhand - solo project of Heretic Prime from Sarcophagic - comes along and mixes unholy scripture with even more distorted vocals. The drum work and stellar synth work is to die for and marks one of my favorite remixes on the album.

Experimental/chillwave project Violet7rip completely gets rid of any power the original track had and replaces it with haunting keys and the like. This is definitely different.

Industrial act Aengeldust injects what I would like to call powernoise into the mix. Very hypnotizing, harsh, and sludgy sounds compiles on top of one another. Along with Ironhand's remix of 'In The Shadows', this one also tops my favorite remixes of this album.

The Greek band Cygnosic - who creates the finest dark electro from Athens, if you didn't know - also give their two cents on this track. Perhaps one of the more cleaner, better produced remixes that I've heard thus far, the track pretty much adds in PoG's original vocals to a Cygnosic song. And, well, if you can't guess, that's pretty fucking awesome.

Pheromone's remix of the track smooths it out completely. Shut your eyes, kick your feet back, and relax as you listen to this track. It takes away all of the screaming involved, and just focuses on Johanna's chords.

Ruinizer comes in with his trademark remix work. With a very cinematic and odd introduction, the bass blasting and ear ramming (and coined) swaggrotech hits in heavy and lovingly as always.

EBM/Industrial master Noisuf-X joins the fray to give a remix for 'Virgin Blood'. Another remix that is well produced, the guitar forms the background while upfront there is a constantly pounding electro beat.

Perhaps the first remix that actually homes in on PoG's guitar use, The Luna Sequence frames her remix all around metal. Making the song go from a harsh electro pumper to industrial metal banger was very, very wicked, and I commend her for doing so.

vProjekt's kinetic remix of the song puts a spotlight on drum work; you'll hear all the other elements combined with them, but the metal-infused drum work will really take you away.

Ah, so, now that I've typed so much that my fingers are bleeding and possibly on fire, I can come to the conclusion of all my rambling. Parasite of God's 'Outcasts and Freaks' may have taken a long time to get to us - two years long at that - but the final result is a God damned good one at that.

Parasite of God's "Outcasts and Freaks" - from both the musician's and Xperiment XIII's standpoint - is hard work done right.

Parasite of God Bandcamp
Proyecto Crisis - Made In Remix is available at POPONAUT from 9,95€

Hell:Sector - 'The Rise of the Apocalypse'