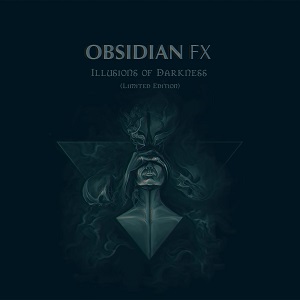 7.5
"Good"
N/A
Electroracle
Released 2014 by Xperiment XIII
Dark Electro, IDM
Russian duo, dark-electro/IDM act Obsidian FX advertises themselves as a hi-tech laboratory that records unheard, paranormal sounds to transmit them into music for our listening pleasure. Other than being told that the two gentleman behind the music go by the names R.DarkArt (on synths, programming, and sound design) and D.Fox (on vocals and samples), there isn't much more to be told. Whether or not this is intended to be a way to keep the fan digested in their music rather than their personality is unknown, but if that's what they're aiming for, it's working.

And this releases comes fresh off record label Xperiment XIII in just about a week. This release went balls out from the gates featuring two discs. The first comes in with thirteen original tracks, while the second serves as a sort of remix disc, though it still holds three original songs.

To cover the first disc, it starts with the introductory song, Sanctum. A nice synth brings us into the depth of darkness that this auditory act beckons us towards, allowing us to submerge ourselves in an already despairing sound and disturbing atmosphere that you just cannot help but appreciate. Coming right out from beneath our floorboards, Shadowgame builds up into a lovely dark-electro centric song with a nice beat and some angry, growling vocals. Honestly, this really isn't anything I haven't heard before, however, they do it nicely, and the IDM inspirations fluttered about give it a kick.

Where The Bloody Rivers Flow offers a really nice song that I dug into. Normally, I can't wrap myself around a phrase repeated multiple times in a song over and over, but when I heard "Where the bloody rivers flow," loop a few times, I adored it.

Breaking back into a slower beat, one that's little chimes and often creepy sounds ran a tingle down my spine, hit me real nicely in the gut when Antithesis came along. The instrumental sections were my favorite, as they really settled a morbid tone to perfection.

Getting off the cold shoulder of horror like sounds, Orbitoclast brought the beat back up and even delivered some cleaner, growling vocals to the mix. It seems as if these guys like to play with their vocals often, changing it up to deliver something new in every bite you take of the album. And it works so God damned well.

The Great Chasm does a great job of creating a background sound that adds a sense of mysticism and oddities, and that fits perfectly well within how this act promotes themselves.

Going at a medium pace, Sea Of Sorrow blends a multitude of sounds to the mix. However, though I liked it, I felt as if it was hard to take everything in at once. It was heaven to listen to the drums and synths, the wind-like effects and the overall instrumentation that appeared around the two and a half minute mark, though. So, I still have no regrets.

Angel of Blackened Skies had my favorite intro thus far, with a cold feel to it surrounded by some atmospheric, dark ambient styled themes with piano work leading the charge. After about forty seconds of this, we slowly ease into an electronic beat that would still work wonderfully in horror films. The whispering combined with some more of that piano work, and the lower key synth work was delicious.

Arsenic had a few interesting notes here and there, but didn't really cut all too well with me in the long run. I was much more fascinated by previous works on the album, and I felt as if this one just really didn't hold up as high a quality as the rest. I think it would make a decent track to dance to, nonetheless.

And, we're back to a slower song with Cellout. I find myself enjoying their slower songs more than anything, and the synth work was again something to take pleasure in listening.

The Ghostsong did not remind me much of a ghost at all. Rather, it reminded me of someone who might just possibly be possessed by a ghost. I repeat, I would like to say that the piano work really helped drive out something unique, and I think is one of the duo's more powerful assets.

And, what I just said is once more reiterated for the intro of Fill The Void. The electronics soon came in, the piano disappearing, and the electronics took on the same beat the piano left off. Very well done work, and, as it goes, everything came together at random points in the song, and the ending left off just where the song began.

The last song on the album, appropriately titled This Is My Goodbye had another slow intro. The dragging beats and high pitched noise present within it were nice touches not heard on the album as of yet, and the song left off with a static noise that comes from a TV.

And, thankfully, I had another thirteen tracks to go through and enjoy. The second disc begins off exactly with what I was hoping to see on the first disc: an instrumental. These guys are good, REAL good at creating ever changing beats intermixed with tidbits from everywhere and anywhere. In Atlantis, while not quite reaching the expectations of my hopes, still delivered a moving instrumental piece that I was able to really sink my teeth into.

Then, I got myself in the midst of some remixes. First off, we got a remix of Shadowgame by Nightmare of Cain. This German fellow left the vocals more clean, and added guitar work into the mix for a more riveting, crunchy sound. Not putting this remix down by far, but I preferred the original.

Nitro/Noise came in with a remix of Where the Bloody Rivers Flow, and did a good job at creating a powerful mix on their own.

Studio-X delivered a dance oriented version of Arsenic. Taking away the grit and dirt that this act prides itself on was odd, but the mix was nice. A little hard to get, but nice.

Subliminal Code worked on The Ghostsong. Rougher and just plain angrier, they did a good job at creating a decent song that got louder as it went on.

vProjekt brought upon a slowed down, and more heavy hitting version of Angel of Blackened Skies. In doing so, every sound that permeateed my ears was digested and chewed out thoroughly. I couldn't help but completely get fuzzy and warm on the inside while listening to every bit of this song. A great remix from a great artist.

Then, taking a break from the remixes, Recreation comes hot off the artists' fingertips. Perhaps falling into the dark-electro side of this band more than most of their songs, the vocals were evil enough, perhaps a bit too digitally effected, but the beat was inspiring.

2 Bullet worked with Where the Bloody River Flows adding in a nice electrorock feel to the song. The vocals were more overpowering than the beat, so that could have been balanced out a bit more, but it was still nice.

Sarcophagic went ahead and toyed with Shadowgame, which turned out to be louder and muddy. It was close to listening to noise with some nice, distorting tones right over it at times. I found it hard to take in the first time, but went back and gave it a second and third listening and liked it more with each play through.

Arsenic got a remix from The Luna Sequence, banging out more electronics and performing a more uplifting tune standing right next to the still angry as ever vocals. A bi-polar pairing, perhaps, but it worked well.

Angeltheory came along with a remix of The Ghostsong. Not a bad remix, but certainly not the best on the album, either. A little too straightforward; a few surprises here and there would have been wonderfully welcomed.

And then came along Ruinizer as the final remixer. Slower and heavier, the few wobbles given out weren't terrible by far. Another good remix from this man; add it to his list of other fantastic remixes he's done and you've got yourself a winner.

And, as the last track on this disc and the album itself, and also as the last original track, Twins did a swell job. More piano work beneath a layer of distorted vocals and electronics, it wasn't half bad. Not the best on the entire CD, but not the worst by far, either.

Now, for my thoughts, this is a relatively solid release that manages to inspire creepy images and spine tingling emotions just through the music itself. They shot to reflect paranormal sounds through music, and they most definitely flaunted that ideal to realistic pleasure.

The second disc just adds an extension onto the album. What I loved about the remix section, however, was not the mere fact that it was filled with good remixes, but it was also due to the fact that the remixes had breaks. It wasn't just one remix after the other, it was an original track followed by remixes, broke in two by another fresh track, and finished off with a final, original song.

So, in all other words, I recommend this album. I'm going to do some shopping sometime within the coming weeks. This will be on my list of CDs to purchase.
# obsidian-fx
# dark-electro
# idm
# xperiment-xiii
# illusions-of-darkness
# nightmare-of-cain
# nitronoise
# studio-x
# subliminal-code
# vprojekt
# 2-bullet
# sarcophagic
# the-luna-sequence
# angeltheory
# ruinizer
Jul 08 2014
Love? - 'Electronically Yours'
Previous article
Kevorkian Death Cycle To Release New Single
Next article

Bandcamp (Physical + Digital)
Obsidian FX - Illusions of Darkness is available at POPONAUT from 14,95€