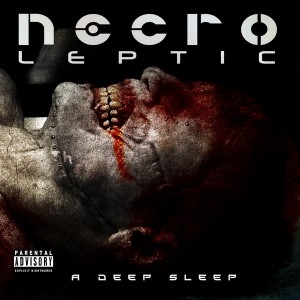 9.0
"Amazing"
Released off label 2011
Harsh EBM, Dark Electro
I went into my first listen of Necroleptic's 'A Deep Sleep' totally blind. All I knew was that it was the second demo by an unsigned act formed in 2011. I'd missed the first demo, so this was my very first experience with Necroleptic's music. Well, as soon as the last note faded, I was left scratching my head. How on Earth could such raw talent appear out of the blue? How could such excellent musicianship be present in a DEMO? Demos, while often good, usually show obvious "newbie" signs - signs that the musicians are still learning their stuff, still getting the hang of how to write music. But this - this sounded like work by experienced musicians. I was utterly perplexed.

Then I did the homework I should have done before my first listen. I read up on the band, finally checking out Nick's review of the first demo, 'Tranquilized' (sorry for ignoring you, Nick) and viewing their bio in various places. All of the pieces fell into place. It turns out that Necroleptic is a side project of Maik G. (music, here going by the name Zypex) of Electric Breathing and Fredrik C. (vocals, here going by the name Talyrik) of Project Rotten and Menschdefekt. Now the level of talent made sense to me.

Maik and Fredrik formed Necroleptic after bonding over a shared desire to create dark electro music that veered away from the traditional club sound, focusing on slower, more melodic sounds with some twisted elements thrown in. They accomplish this in spades. 'A Deep Sleep' is a dark, perverse departure from what we normally get from the genre, with horror-centric lyrics (lots of references to blood and gore here) backed by a vocal style of pure aggression accompanied by melodic synths, interesting beats, and plenty of instrumental breaks throughout most songs that are usually at least slightly different from those that come before or after. They're songs that often tend to go all over the place, breaking the traditional cyclical pattern that songs in this genre tend to follow. Adept handling of the layering of synth refrains and beats, worked in smoothly and paired well with the vocals, makes for a great contribution to the genre.

'A Deep Sleep' builds upon 'Tranquilized', including the same four tracks from that album ("Bound by Blood", "Liar", "Surgical Torture", and "The Nameless One") and adding four new songs to the mix. While these latter three songs are the strongest tracks on the album, there are some great new additions to Necroleptic's library on this album.

The album opens with "Cage of Bones", a good choice for an opener due to a structure that includes a steady build-up to an almost military march-like rhythm of synths and bass beats, matched by the vocals. It sets the tone and intensity well, moving from those steady beats into whip-like moments and instrumental breaks that make great use of samples from the film 'Se7en', all the while maintaining the intensity despite the many changeups.

"House of Pain" comes next, incorporating melodic synth lines with a good metallic beat. The song has an interesting flow to it, scaling back on the instrumentals when the vocals kick in, relying more on the bassline and bassbeat to support the lyrics, then segueing into melodic instrumental breaks and back again.

Track three, "Bound By Blood", debuted on the first demo and, as on that album, is the weakest track here (followed closely by "House of Pain") but it's still a good tune. It does a good job of combining samples (from 'Saw', if I'm not mistaken) with a heavy beat and rhythmic synths. It maintains a well-handled pattern of building up then scaling back on intensity.

"Sweetest Death" is one of the new offerings on this release, and there's a noticeable spike in quality here. The layering of synths is handled well in this song. This can be heard in the intro, where progressive layers build up to a strong beat/synth combo that flow into aggressive vocals that are paired with an equally aggressive, simple synth line. An instrumental break showcases this as well, introducing more melodic synths that pair well with the vocals upon reentry.

Another new offering, "Crown thy Sinner", follows that. It's one of the best songs on the album, opening with a good, pulsing synth line reminiscent of modern industrial, with a strong beat kicking in. Here again Necroleptic show their talent for flow, making great use of the insertion of short melodic bursts into scaled-back bassline/bassbeat-driven vocal sections which are soon woven with a slow, organ-like synth line that gives the song a great sinister feel. These sections flow into instrumental breaks that are never quite the same - the fact that the song flows into and out of each break smoothly is rather impressive.

The final three tracks on the album - "Liar", "Surgical Torture", and "The Nameless One" - are the other songs that were first heard on Necroleptic's debut demo, and, as mentioned previously, are definitely the strongest tracks on the album. The layering of synth lines in "Liar" is absolutely fantastic, and once the vocals kick in the song builds up into an assault of equally aggressive lyrics and synths that are brutally dancefloor-worthy. "Surgical Torture" is the most melodic track on the album, with synths that adhere to a traditional EBM sound, pairing and clashing interestingly with the harsh vocals and angry lyrics. It's vicious, nearly relentless, and fantastic. I can't decide whether it or the final track, "The Nameless One", is my favorite. "The Nameless One" is the perfect choice for a closer, brooding and atmospheric tune that scales back on the pace but still manages to maintain energy. A few bars in, it introduces some great sounds reminiscent of classic industrial - they're carried forward and pair interestingly with the more modern, EBM sound of the changing synth lines throughout the remainder of the song.

Maik and Fredrik are on to something here. There were signs of it in their first demo, and there are even more signs of it on 'A Deep Sleep'. The focus on a slower pace and more melodic sound with an emphasis on varying instrumental breaks, all the while managing to maintain energy and provide some dancefloor-worthy tracks (which can be more difficult to do with slower tracks - despite how slow songs can get in this genre, they're never the "put your arms around your partner, folks, here's a slow dance number" type of tunes), shows real promise for a unique contribution to the genre. We need to hear more from this group. I sincerely hope that Maik and Fredrik continue to pursue this project. I'll fly out to Europe, shove them in a studio, and bar the door if I have to. Whatever it takes to hear more. May 03 2012
C-Lekktor - 'X-Tension In Progress'
Previous article
Retrofuturo (Album) by Isis Signum, released 2nd May 2012
Next article

We don't have any stores registered for this release. Click here to search on Google
Alien Skin - Dont Open Till Doomsday is available at POPONAUT from 12,95€