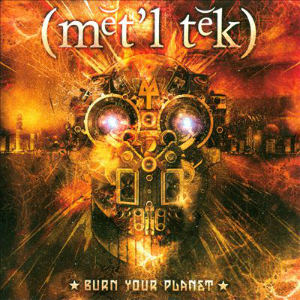 Spotify
Released 2011 by Alex Tronic Records
Industrial Metal
The first time I heard of Metaltech was at a gig I was running in Glasgow, in early 2011. My first thought on hearing the name were 'oh gods, not another generic three-piece Scottish metal band'.

Nothing could be further from the truth. I have yet to see a band who are so little like their contemporaries as Metaltech are to the rest of the Scottish industrial and metal scene. There's no pretension to them; they're just pure rock and roll attitude. It's maybe not part of the dark, brooding gothic aesthetic many industrial musicians seem to adhere to, but it's much more fun. Between the outlandish costumes (including frontman Erik Tricity's orange-and-white greasepaint tribute to Gene Simmons), the crowd participation involving chucking handfuls of glowsticks and a blow-up sex doll, and the ridiculously long guitar solos more often associated with the heavy metal styles of the 70's and 80's, Metaltech are from start to finish an act you go to see just because they're fun.

But I digress; I could rave about their live show for several pages, but the question at stake here is not whether their stage performance is flawless (it is). The question is thus: can the masked trio make a studio product that captures the same energy, showmanship and white-hot skill they put into every gig they play?

The answer is an undeniable "yes". From the opening of the first track to the last Metaltech indelably stamp themselves into your brain.

The opening tune, "Elektrik", gives you a smooth intro into the rest of the album with some sublime guitar and bass work, varying between low dragging riffs and more high-pitched squeals of solo interludes. From the second track onward, Metaltech begin to flex their electronic muscles - though the melodies in use are often simple ones, they vary in range and feeling enough (ranging from warm, acidy backings to cold and sharp front-of-speaker synths) to stop any two songs sounding too similar. There's some experimentation with punchier, more DnB-esque drum lines in "This Kiss" and "Kommitment" too, adding another level to the already multi-faceted sound.

If the first half of the album can be considered an imprint of Metaltech's own style, then the second can be seen as a tribute to their influences; more importantly, the variation between tracks becomes more distinct, playing to the varying tastes of contemporary industrial audiences. "Slam Trance" feels very much like a supercharged version of "Juke Joint Jezebel"; the synth voices on the intro have that same echoing sound fans of the latter will recognise. That's not to say it's a ripoff: the Metaltech presence is still there in the blistering guitar solo that tricks you into thinking it's over at least twice and probably the best vocals on the album short of the title track.

"Sex On The Dancefloor" is a more-than-subtle nod to fans of the 'bleepy thump thump' style of industrial; for this song the guitar and vocal elements are diminished in favour of a vocoded chant, more dirty electro style melodies and frequent use of breakdowns more associated with techno than industrial metal. It's right back to the relentless metal style with the title (and last of the album) track, "Burn Your Fucking Planet", though. Metaltech are maybe showing their age a bit here, because in the vox samples you could swear frontman Erik is doing his best Johnny Rotten impression. This isn't entirely surprising as the whole song has captured some of the original late 70's punk feeling of bringing everything crashing down; from the very start the shred of the guitars is relentless, with the vocal verses carried on equally massive basslines.

One final praise I have for the musical content of the album is the vocal range: Erik must go through at least four different sets of vocal chords across the width of the album. The changes are not so much as to sound alien if you were to listen to each individually, but just enough to add an extra layer of variation to each tune. This is something that's often missing from some releases, and it's good to see a vocalist really pushing himself to not get stuck into one way of doing things.

Another thing Metaltech pull off is injecting a dose of humour into their music, without sacrificing the musical content. There are a smattering of bands who try to get this right - usually under the guise of the "fundustrial" genre - but don't quite manage it. The 'for the lulz' mentality works well on the Internet, but it doesn't translate into music without turning the tunes into garbage.

Metaltech have got it to a tee, though: their lyrics are cheesy ("I've rocked to Saxon / I've roamed with priest / I have the mobile number of the beast" and "Smash open your fridge / Let's fuck this place up" being two more prominent examples) but you can still see proper structure in them; it's not just some juvenile selection of catchphrases and profanity. Sometimes the overuse of sexual innuendo can get a bit cringe-worthy, though; this is one of the few faults with the album that knocks it off a perfect score.

One criticism I can think of is that there is some disparity between the studio album and the live show. You would be forgiven for thinking, after a first listen, that this is some sort of gag band along the lines of Tenacious D, or Steel Panther, or something else equally ridiculous. It's not until you see Metaltech live that you realise that it's part of the whole package; these guys live their stage personalities. Any cheesiness in the music is just a by-product of that energy and rock n' roll attitude they possess.

Conclusion? It's a well-produced, well-written album with a unique sound that surpasses most contemporary industrial releases, and an infectious energy to boot. The retro 'sex, drugs and rock n' roll' aesthetic Metaltech display may be a bit much for some - even I'll admit that some of the lyrics make me cringe - but if you can get past that and enjoy the music for what it is, you'll never look back. Oct 05 2011
Harsh EBM from Colombia in form of Terrorkode
Previous article
for all the emptiness - 'Axioms'
Next article

We don't have any stores registered for this release. Click here to search on Google
Red Industrie - Censored is available at POPONAUT from 9,95€