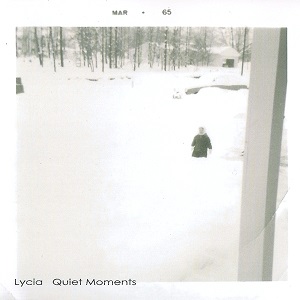 Spotify
Released 2013 by Handmade Birds
Darkwave
When life becomes truly messy, when melancholy and sadness capture every corner of your soul, there is nothing more precious than returning back to the roots, diving into this sea of emotions to give an opportunity for its waves to wash out all the negativism. One perfect soundtrack can be available in this case, and I admit that I take this pill to recover from the damage quite often.

Lycia has been one of my favorite bands for many years from the early nineties and I really missed a new material from this Arizona based formation. The silence was kept for more than 10 years if not taking in consideration some web EP's. Without any concern, "Quiet Moments" arrived just in time to support me in my every day life troubles which I had experienced recently.

I am sure that for those of you which had been there since twenty years ago, Lycia remains a really memorable act, being pioneers and true developers of the alternative sub-genre called "darkwave". As for me, their albums from mid-nineties "Cold" and "The Burning Circle And Then Dust" became an etalon and classics of the genre long ago. Establishing their own sound and vision of an art, Lycia kept these high standards for many years, never betraying them for changes in fashion or sacrificing them for ratings and sales. That's why all the elements that we loved 20 years ago are back again through the new creation receiving even more emotional charge.

The album is actually divided into two parts and it is very important to discuss each of them separately because of the significant differences between them. First of all, the music of Lycia remains to be a deep personal exploration for the listener. Mike VanPortfleet, the man behind Lycia, mentions in one of his interviews the importance of solitude in his life and in the life of each and one of us:

"I've always been an isolated person, and while it has been a stark and unpleasant state for me a few times during my life, mostly it has been a very comforting place...The music of Lycia is all about isolation..."

And of course, isolation can give a lot of food for the thoughts to work on. The first track which is in fact a title track of the album is all about solitude and isolation; while "Quiet Moments" flows out of my speakers, I concentrate my attention on the easily recognizable passages and riffs, the width of the atmosphere which is created by a slow guitar. A gentle vocals session on the level of a strong whisper which became a trademark of the band is there again to give a special flavor and inimitable signature, to be the engine that drives all the feeling and senses. A percussive drum gives a slow and constant rhythm, the same element presents in all the compositions, sometimes slower and sometimes faster, but always being there as a heartbeat of the music bound together with a heartbeat of the listener. The second track continues the process of the extremely wide and shape soundscapes jiggling me softly on the airy waves.

The music of Lycia talks a lot about nature and seasons, but not only the feeling of seasons is important, but also the right timing and the place itself. That's why the following compositions have to be perceived literally because their names reflect the exact experiences and emotions of the author. The air in my room becomes crystal clear; the temperature drops below zero and the windows become covered with a thin layer of ice when "Antarctica" starts its somnolent motion. Slowly, the album reaches the point of the best track "Greenland" which presents all the elements that I love Lycia for. The gentle riffs of solo guitar, droning loops of background lead guitar, synth, drums, vocals, all of them are bound together to paint a beautiful image of vast landscapes full of trees and grass, singing hymns for triumph of primordial nature. "Grand Rapids" is made with the same bricks which fit perfectly in previous songs but with a very slow tempo making it sound even more mystical and hypnotizing. The following track "The Pier" is a pure ambient composition drawing images of a lonely figure sinking in the foggy morning by the bank of a frozen river.

While I approach towards "Spring Trees", I finally realize 100% how much I missed Lycia and its unforgettable atmosphere. The track concludes the first part of the album with a lighter mood of trees being waken up from their winter sleep. This is the part where a female vocal of the second original member of the band, Tara Vanflower, appears for the first time in this record and I love its airy feeling that is added to the overall experience from the music.

Here a major change happens to take the music into slightly different direction. Four upcoming compositions become driven by a mechanical-like sound and rhythm charging the sound with a lot of energy and even anger. Guitar based melody presents as well, but it is moved to the background, playing a less significant role, while all the attention is being concentrated on those scratches and rhythmic clicks. The wide atmosphere remains in each and every tune keeping melancholy and sadness alive. "The Wind Sings" and "Dead Leaves Fall" are very dynamic, implementing a little bit different perspective into the regular sound of Lycia, making it, let's say, more fresh. "The Soil Is Dead" is the second track where Tara Vanflower appears with a soft, but still energetic voice to guide this final composition to its very end.

The new record from this legendary band proves once again that it is too early to bury the talent of these Arizonians and they still have enough to say to this world. The expression of deeply personal experiences find their stage, shouting from each and every tune. I still miss the voice of Tara, especially when I'm reminded of the great moments from "Cold" album for example. In my opinion, appearing only in two tracks is not enough while it could fill this CD with even more divine beauty. Anyhow, the outcome from the mastermind of Lycia, Mike VanPortfleet, is brilliant and "the must" for all the fans of this special genre called "darkwave".