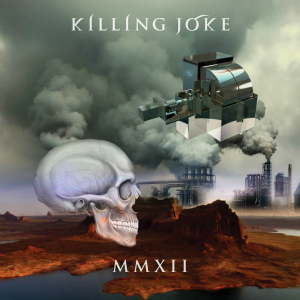 Spotify
Released 2012 by Spinefarm Records
Industrial Metal, Industrial Rock
After 30 years and still going strong and influencing the likes of Nine Inch Nails, Ministry, Godflesh and Japanese digital hardcore act The Mad Capsule Markets. Killing Joke have returned with there follow up to 2010's 'Absolute Dissent' and also marks the second album of the original line up consisting of vocalist Jaz Coleman, guitarist Geordie Walker, bassist Youth and drummer Paul Ferguson. The album itself is based around the ideas of events and conspiracy theories that are meant to happen in the said year of 2012 and each song centres on the concept of a single theory or event.

Pole Shift - The opening track discussing the pole change that is meant to happen in this track. Starting purely with ambient-like keyboards setting the scenes in the beginning, then the band is coming in and Coleman's vocals giving a steady pace and slowly increasing in aggression, while the musics tempo also increasing. The track is a real epic opener, clocking in at just over 8 minutes long and comfortably goes back and forth between tempo changes.

FEMA Camp - A track discussing the conspiracy theory that inside American States there are detainment and concentration camp-like centres inside America used to detain American citizens and American born dissidents. Starting with stabbing-like bass and a more melodic accompaniment on the synthesizer and then followed by guitar and drums. This track is more mid tempo and reflects the real aggression front man Coleman can put out shouting the words FEMA CAMP and not sound strained or anything, and then returning to an almost spoken word style back in the verses with little or no effort.

Rapture - A track fans may remember if they followed the Killing Joke Facebook page as it was shown on there site before the release of the album. There talking about the Rapture that was meant to happen last year and how Christians were meant to be ascended to heaven while the world ends. An up tempo with a strong backbeat on the drums, synths that cut through the mix like a knife, stomping bass and Geordie Walker's almost hypnotic guitar tone. This track for me just sums up Killing Joke with their industrialized post punk sound and apocalyptic messages in the lyrics. It was a brilliant track to preview.

Colony Collapse - Another more mid tempo track. Opening with a synth arp pattern and guitar harmonics, then kicking off out of nowhere with it's swinging 6/8 time signature and more great lyrical and vocal delivery and has a real stomp to it. Great idea of using the synthesizer as the instrument to play the riff, freeing up the guitar to be used in more ways, such as the heavy use of lead parts in the song and even guitar solos. A very fresh track for Killing Joke and really does reflect Geordie Walker's skills as a guitarist, which are often underretad or even ignored.

Corporate Elect - A song talking about how people buy their way into power, something that is a big topic of debate at the moment, how people are being deceived by this matter as well and also mentions the New World Order conspiracy theory. This song could be considered a nice little point of view of it, an immediate start to this track and possibly the fastest song on the album, only 3 and a half minutes long. The track itself reflects the more punk side to Killing Joke and focuses more on the band itself. With almost no electronic aspects at all, it almost gives the vibe of going back to the days of there early releases.

In Cythera - A track that totally shocked me and showed a melodic side to Killing Joke with ambient synth pads, purely melodic vocals while the bass and guitar play riffs in sync giving the drive to the song. The drums in the track also have a real change to them, with the kick and snare placement and also the hi hat patterns, giving an almost breakbeat feel to the song. However, the highlight are the lyrics they are, dare I say it, beautiful! Showing so many factors, such as loss gratitude, hope and longing. I really cannot sing enough praises about this track, it's so different for Killing Joke and probably a personal favourite on the album.

Primobile - A slower track with arpeggio guitar chords and bells playing during the verses, while the bass and drums steadily goes along, keeping the pace. Going and driving while keyboards appear along side the bass, helping reinforce the rhythmic and harmonic side to the song. Vocally more melodic, while shouting is in the chorus, helping to show that even in melodic songs that Killing Joke write, also could have the aggressiveness to balance.

Glitch - Another explosive track from the start, with guitars and keyboards going from low chords to high up the scale, while Paul Ferguson bashes away on the drums with heavy beats and frantic fills. This song is probably the heaviest track on the album with heavy palm muted guitars and chugging bass in the verses and Jaz Coleman not holding back at all vocally, just letting the apocalyptic rant with all guns blazing. Also a track reminiscent to the approach they had on there 2003 self titled release. This is post punk and industrial metal and it's probably most aggressive track.

Trance - Pretty much continuing off from where "Glitch" left off. The track "Trance" is a 6 minute long mid tempo track with the bass and drums having a disco like four on the floor feel to them, while the guitar hypnotically drives along. The keyboards are interspaced between the verses and choruses and melodic vocals are the main focus for the lyrical delivery. Musically this track reflects that, when you think you've got Killing Joke figured out, they still have another trick up there sleeve.

All Hallows Eve - And finally the closing track "All Hallows Eve", and nope not a song about kids in costumes and candy. It's a song that is suggested about missing someone that was lost with references to churches and graveyards, with the line "I miss you so much". But, also themes of resurrection with verses on rituals of rising the dead and the shouted line in the chorus "Wake up people". Musically the track is a steady paced song with keyboards and choir arrangements and keyboards being heavily used. It plays mainly the harmony, while the guitar and bass take the more melodic roles, with high pitched bass lines and arpeggio chords on guitars. Also, heavy use of rack and floor toms on the drums, making the swing to the song ritualistic and tribal like musically too.


What can I say about MMXII? simply WOW! For me this is a big improvement on the last album which bugged me on the production side. It was going for an almost raw factor, made the mixing to be desired for in some places. Also the lack of keyboards and synthesizers in the songs, which I felt greatly missed as they provide so much atmosphere and melodic sense to the music. However, it seems Killing Joke after all this time can still pick up and show new things with tracks like "All Hallows Eve" and especially in "Cythera", where they really do manage to successfully keep the listener guessing, no matter what album you pick up by them. I'm going to give the album a 9 out of 10, as I could say this album is flawless and yes it could be, but I feel some of the songs go on for a little too long and that very little new is added to the already established parts of the songs. None the less, this is a great record and shows why Killing Joke are as influential as they are.
# industrial-rock
# ministry
# industrial
Jul 04 2012
Equitant - 'Body Vehement'
Previous article
Sin D.N.A - 'Revelate'
Next article