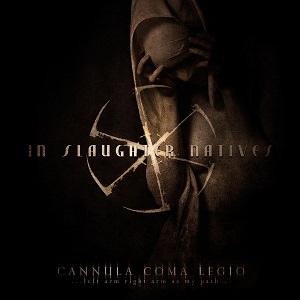 Spotify
Released 2014 by Cyclic Law Records
Experimental, Industrial
Album of the Year #6 2014
Autumn 2014 reigns outside my home and I cannot believe that twenty five years passed since the day when Cold Meat Industry had started its activity changing the face of industrial music once and forever. Much time has elapsed since then; many remembrances of the past have lost their significance, becoming but confused dreams, though specific memories remain fresh until today. In Slaughter Natives became an inseparable part of those memories of mine painting them with thousand shades of black. While belonging to a special group of people whose life is intimately intertwined with musical experiences, this strain enables me to capture images of my daily life, my hopes and desires, frustrations and disappointments through my favorite tunes. That's why Jouni Havukainen and his project have a notable place in my heart presenting extremely complex, tragic and intelligent creations with enviable persistence. Even when he loves to take his time between albums, the Swedish fella doesn't stop his activity and continues to perform on stage for the greatest joy of fans.

It's obvious that my journalistic activity demands a certain level of musical knowledge, therefore I spend quite a lot of time on-line tracking news and press releases of different labels and bands. I was really excited when I came across some rumors that In Slaughter Natives were back in studio preparing new materials for the upcoming album around a year ago, but either an exact format or a concept of this CD were not completely clear until recently. All the doubts were dispelled a few months later when Canadian Cyclic Law officially announced the release of a teaser under the code name "Cannula Coma Legio", a prequel to things to come containing three brand new tracks alongside few remastered versions of older records. What I certainly love about such compilations is an opportunity to feel the results of the bands' evolution and compare different periods of its activity in one package. A perfect timing of this release is equally important to heat up the surface before the full album which I hope will see the light through Cyclic Law as well. Furthermore, jumping slightly ahead I have to assure you that even being not an entirely "new" record, this piece of plastic wrapped in a beautiful cardboard digipack succeeds in blowing me away with its power and attitude from the very beginning.

"Plague Walk My Earth" unleashes all the energy with a solemn but yet tragic melody full of blatant grieve and deep sorrow. One of the most important elements of In Slaughter Natives was always a combination of a strong drumming session and "Cannula Coma Legio" is not an exception. Half-martial, half-ritualistic beat blasts the music, pulsating with pathos and immensity. A truly wide atmosphere captures every corner of my imagination drawing intricate patterns of loss and decay. In "Definition of Being Alive" Juoni masterfully interweaves elements of middle-eastern trumpets into a very massive rhythmic structure of an industrial composition in its basic form. Moreover, a growling vocal session adds a lot of energy and primordial rage to shackle my heart with unfathomable fear.

With one more step I reach a "Silent Cold Body" and my spirit strives for the highest spheres disconnected from a perishable shell made of flesh and bones. A medium tempo ritualistic drum beat counts the last seconds of existence to the melody of a musical snuff-box; small porcelain figures are whirling in prurient demonic dance. A creepy whispering voice eats its way into the depth of my sanity accompanied by background choral lament. With such an emotional state I am being dragged into my favorite track of this album. "Venereal Comatose / Closed My Eyes" is a true masterpiece that tears the texture of reality apart. This track is a quintessence of all the best elements that can be heard only on the highest levels of musical craftsmanship. Extremely dense multi-layered sound, various special effects, choral singing, a completely tragic, but simultaneously sublime melody, words as sharpest nails that pierce hands and feet of the one that has acquired a well-deserved place on the cross, all of them create an unforgettable experience while I cannot stop spinning this track again and again and again. I must admit, those two tracks from this compilation are possibly the best that I've heard from In Slaughter Native in all its long history and maybe the best crafted twenty minutes of ritualistic industrial music during last five years.

Oh, god, are you alive out there? If this is an appetizer to the new album, I cannot even imagine what is going to be in it. But at this point the music takes some brake with a slower part of "Left Arm Right Arm As My Path" where the rhythm is being set aside for a while to clear space for a lot of ambience. The sound still remains very dense with a lot of stuff happening, special effects, choral singing, deep background growling, samples and organs, all of them are still there to create an impressive majestic atmosphere. Adding heavy drumming in "Gaudium Et Alia Vitia", ISN continues to explore kind of a tribal or occult side of human nature when images of ancient bloody sacrifice are very strong risen by the sound of middle-eastern duduks, zurnas and other exotic woodwind instruments.

And with the last section of this great CD, I can taste the history of Juoni's craftsmanship throwing me more than 20 years back in time with the tunes of "Ignis Et Scalpello / Angel Meat" taken out of the "Enter Now The World" period. Definitely, the difference is very sharp; the music becomes less complex and straighter forward. Bombastic melody and industrial atmosphere is the key of the early ISN success and this rhythm blows out of the speakers with all its strength. Another old track concludes this album with a martial drum beat and heavenly voices ascending a suffering soul directly to the spheres of heathen gods.

An hour flew by like one minute and I feel the masters' presence in my room. He is back and his music marches side by side with him to fill the hearts of noble men with strength, honor and dignity. If you are still in doubt which album you have to choose while you witness the dawn of human race, please stop. Your further search is pointless because what you hold in your hands is a liquid gold, the alpha and the omega, the apocalyptic breath that burns all the doubts out of your trembling soul. And the only reason that I didn't give this release a convincing 10 is my expectation from upcoming full length record. Hold tight, brothers and sisters, because he is back with all his power, he is back to crush the sculls of pathetic haters. No more words, just In Slaughter Natives.
# dark-ambient
# martial
# industrial
# sweden
# canada
# cyclic-law
Nov 29 2014
The Gothsicles - 'Squid Icarus'
Previous article
Interview with Luna 13
Next article

Cyclic Law
In Slaughter Natives - Insanity & Treatment is available at POPONAUT from 34,95€