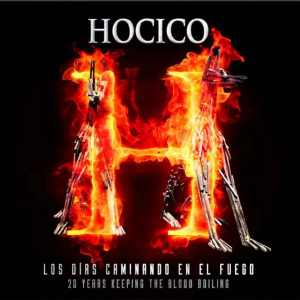 9.0
"Amazing"
N/A
Electroracle
Released 2013 by Out of Line
Harsh EBM, Dark Electro
I absolutely adore the holidays. I mean, what's not great about them? You get to spend time with friends and family, give and get gifts, drink as much as you want until you collapse and smash your head off of an end table causing you to become unconscious, and, aside from the depressing and occasionally suicidal relative, all will be happy and smiley. And, what's a better way to celebrate the holidays then to finally sit down and listen to Hocico's 20th year anniversary collection, Los Dias Caminando en el Fuego?

However, what I shall be reviewing is not only the CD, but the whole collector's set which I currently have set before myself. To start off, I suppose I should just explain what the set includes. Everything is housed right inside a very nice, pyramid black box with the Hocico logo and album title printed in white on top. It's a very nice wooden piece that belongs in any collection.

Inside the box you are treated to all sorts of goodies. You are given an official ownership certification, giving you a personal number out of the limited 999 copies. It's made of a post card like material, so it's a thicker paper and won't bend easily. You are also given a medallion and a pendant to accessorize with. The medallion is on a white, red, and green cord, which I'm guessing is supposed to recognize Mexico as the duo's home. The medallion itself is silver, and carries the title of the album, along with the years that they've been active (1993-2013). The pendant doesn't come with a necklace or anything, but it is very nice, once again showing off the logo.

But, the fun does not end there. We also have a book and a t-shirt to go along with this gift set. The T-shirt is a reprinting of their first shirt that was ever made; on the front is their name with the skull of an animal, with the back showing off their logo again, with the text reading, "Made to fuck you up!". But, the book is where the real fun is had, which is a 56 page trip down memory lane. There's a very nice note on the first six or so pages, with a translation in English, Spanish, and German to cater to their larger fan groups. Honestly, it was fascinating to see where they were, and where they are now. But, now, let me get off the subject of material possessions, and discuss the music.

The set comes with three CDs, all of which are pretty good. The 2CD version of the album is exclusive to the box set, and contains thirty tracks of Hocico goodness. The third CD that comes with the set is very interesting, as it contains unreleased material from 1989 to 1999, both from the Niñera Degenerada and Hocico de Perro sessions, which were titles that the duo gave to themselves in the beginning.

Now, as for the first disc on the set, which contains the first sixteen songs, I was able to go through it entirely without nodding off a single track. Thy Kingdom Come was amazing, I don't really care whether or not you get this set, or even the single CD, but you should really, really check out that one track; the synth work was superb. Open the Gates of Hell was another track that stuck out, reminding me of something that would play as the credits rolled on a supernatural horror film.

El Renacer De Los Caidos was another song that stuck out; in the midst of aggrotech, I found a song that brings out a folklore type tune that could be very well paired with a journey through Scottish plains as the winds bustled through your hair at the sight of a majestic sunrise.

Now, moving away from the first disc and playing through the second, the first track really made me want to plow right through it and eat all the evil sweetness up in one bite. It was harsh, and brutal, forming a synth laden, drum pounding, devil distorting cacophony of aural pleasure. It was an amazing way to start the second disc, and paved way for more good music to come.

In a few hours you'll be dead was an interesting, noise track found on the album, inserting samples and cutting up even more samples to create a pretty creepy minute song. A very dancey song found on the album was Not like you, which has been released previously by Hocico, but this is the first take version of the song. I didn't find anything wrong with it, and quite enjoyed with this version.

And, so, moving onward to the third disc, as I said above, this is filled with earlier and unreleased tracks. Some of the songs on here aren't as great quality as the others, specifically speaking of the tracks from 1991 and before. They were quite ugly, however, these are unreleased up until now, and are a showcase for where the duo once was, and where they are now.

Also included on this third disc is video footage of a performance they did back in 1995 in Mexico City. You cannot be expecting high definition quality with this, as it looks like it was meant to be put on a VHS tape. Once more, this was very interesting to watch the humble beginnings of two guys with a dream to make music and live for it.

And, that's all there is to it. I suppose that's a pretty bad understatement to the whole collection, but, as far as this review is concerned, I think I've said enough. There isn't a single track on this album that I have not enjoyed, and I plan on listening to the near three hours of material I was supplied with in this collection as soon as I get the chance. This gift set isn't only for the hugest Hocico fan in the world, but it's also for anyone who's looking for a history of a great band who's released great material ever since their start.

IsoTank
Hocico - Shalom From Hell Aviv is available at POPONAUT from 17,45€