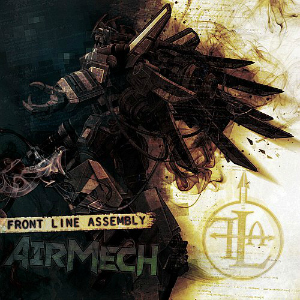 Spotify
Released 2012 by Metropolis Records
EBM, Industrial
Album of the Year #22 2012
It's been a quiet two years or so in the Front Line Assembly camp after 2010's 'Improvised Electronic Device' release. They are back with a new soundtrack release from the same titled video game, Airmech. It's a game building on the basis of many modern day mecha anime and visually look similar to something you would see in animes such as Mobile Suit Gundam, but does the music fit perfectly to the game itself? That is the question.

Opening with the title track "Airmech" which almost; you could say sets the scene for what this album sonically is about.
It is the usual formula, ambient airy like synths and highly layered sounds that scream FLA right away. It is a pleasant way of slowly leading the listener into the album that us helping to be a scene setter in a soundtrack sense.

Continuing this vibe is the following track "Arise", opening with a jet plane roar like sample, but things have been shaken up with an inclusion throughout the track of dubstep bass sounds which really caught me off guard. However, it's a nice addition and surprise considering how much FLA are considered pioneers of the electro-industrial sound.

"Pulse Charge" comes up next continuing the Dubstep bass and approach from Arise the track doesn't really kick in till about the 1:30 mark but this is when the dubstep style of the track really does kick in with a heavy use of dubstep stop and start like beats over thick layers of synth pads and strings.

"Prep For Combat" follows and is the longest track on the album clocking in at just over 7 minutes. The tempo drops slightly for this piece but still keeps the flow at a reasonable pace throughout its bleeping and detuned sequences, multiple layers of electronic percussion and also a use of live acoustic drums which really does change the dynamic, giving FLA's cold and machine like at times electro-industrial approach a human side.

"System Anomaly" starts with a more four on the floor EBM approach before coming to the breakdown and choruses sections taking a more breakbeat approach and also the use of metal like double bass bursts before leading back into the more EBM side of the song till the end.

Next up is "Mech Killer", which follows a similar formula as the previous but instead is replaced with a more dubstep and electro house approach.

"Everything That Was Before" has the long synth/soundscape intros that FLA are known for but getting further into the track there's a total spin - its for the whole an entirely dubstep track and complaints will be heard about this kind of thing but this was probably a personal favourite and a highlight for mel with its heavy bass stabs, "stop start" drums and glitches which could easily fit into a set with ease.

After the Adrenaline rush of previous tracks, "Lose" helps give the breathing space that an album needs at some point one of the more downtempo and lighter tracks still complimenting the dubstep elements but with a slower pace to it. Four on the floor kicks provide more relaxing song compared to previous tracks and being in the second half signals that soon all is coming to a close.

Another personal favourite on this album, "Burning Skyline" is more familiar territory for FLA utilising the breakbeat elements of previous releases and has some of the best synth and programming arrangements I've heard for a while - it really does keep you interested to the end of the album.

This could be a redeeming track for more die hard fans of the band throughout the chorus I noticed a synth sequence that gives off the same effect as guitar picking with delay which was an interesting addition to the already well arranged and put together sounds.

"Stealth Mech" is next and well the name compliments the sound of this track which is sonically quieter compared to other songs on the release, and at times almost haunting with the ghostly progressions and lines throughout. It is similar to "Lose" in how it gives the album breathing space after the hard hitting songs.

Now finally the last 2 tracks on 'Airmech' titled "Death Level" and "Prime Empiricism. : Starting with "Death Level" a mid tempo song with a heavy emphasis on acoustic drums to drive the rhythm and flow along side programmed percussion and pulsing and stabbing bass synths while choir arrangements and string arrangements dominate the harmonic side of the song.

The closing track "Prime Empiricism" quietly builds up with quiet, almost delicate multiple melodies leading up into more of a build up with electronic drums and slow repeating bassline throughout its six minutes it adds more and more whether its more pads or more layers of melodies even small subtle things like additional percussion it still keeps you going right to the very end and works well as the closing track.

So back to the question at the start of this review does it fit perfectly for the game and concept of the media itself?
Well my answer is yes and this opportunity has really shown that even the older pioneering bands still have a lease of life and still able after all this time to carry on with progression and evolve and the music itself really does help immerse you in what is expected of a game of this genre.

I've always been a fan of Mecha anime and science fiction since I was younger and always wondered what it'd be like to have an industrial artist do something like this.

It seems my curiosity didn't disappoint and really did have me interested especially in the musical direction, keeping up with current musical developments and how the band has managed to add elements like dubstep and still keep it familiar - the overall arrangement of the tracks in the album helps give it the flow that is expected of a soundtrack.

However this could be seen as a double edged sword -yes its progression but I feel because of this progression it may not be for every fan and at some points may leave them feeling alienated at times but never the less a great release with many interesting points, leaving me wondering what is next in store for Front Line Assembly.
# front-line-assembly
# electro-industrial
# ebm
# dubstep
Dec 20 2012
MARCO'S TOP ALBUMS OF 2012 - #9 (Part 15 of 23)
Previous article
Legend - 'Fearless'
Next article

We don't have any stores registered for this release. Click here to search on Google
Front Line Assembly - Airmech is available at POPONAUT from 13,95€

Mildreda - 'I Was Never Really There'