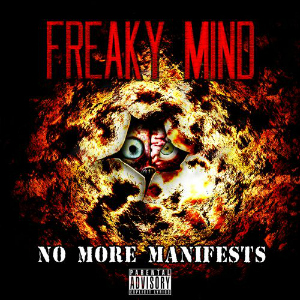 Spotify
Released 2012 by Synthematik
TBM, Aggrotech
More Manifests is remix compilation from the Russian aggrotech/dark electro project Freaky Mind on the Synthematik label. Freaky Mind made their debut on the Russian dark scene in 2011 with their album 'No More Manifests'. The debut album received much positive feedback including from my colleague Patrik Lindström, " Its high standard, high quality and with none of the bugs usually found in debut albums. Freaky Mind sounds experienced."

My first thought was that it was very brave to put Na-Hag and their Tribal -Industrial sounds first on this remix album with the "Fight (Na-Hag Remix)" version of the aggrotech floor filler. But whoever compiled the album quite rightly had no doubts. We are met at the start with tribal drums, but these move into a more industrial sound with some great drums beating out loud and into rhythmic noise. It then moves up tempo and the the drums make out a very structured danceable beat. This tribal feast of spirit and energy is all going on around the good Freaky Mind harsh vocals at its core.

Next we have "Rule The Empire (Liquid Red Remix)" from the Yekaterinburg based electro-industrial trio Liquid Red. A well layered track with good synth lines and drums giving prominence to the screaming almost punk like vocals. The band have also kept enough of its trance element to enable it to still be a dance track. Brilliant lyrics:

And they get even better, but I won't continue as impressionable young adults read this, I hope! Everyone should have their hand up by now anyway.

Our first new track is "Don't Move", very much dark electro and then aggrotech in sound with standard distorted and harsh vocals, and hardstyle/trance like synths. This all makes for an excellent dance floor filler, through the good drum beat and screaming synth melody. The vocals are as quality as in previous tracks as they resonate with the synths to share the emotions and feelings. Not to move to this would be an impossibility.

[Sin.thetic Squad] the electro-industrial band from the Russian city of Bratsk are next with "Cyber Girl (PlzFukcMe! Mix by [Sin.thetic Squad])". The lyrics just get better, but read them yourself on Bandcamp if needed. This features some good synth dance music and distorted vocals. The synth lines are excellent for their purpose, creating a good melody and beat, which are again leaning towards the hardstyle/trance style. All round a good remix and for me a better and more complex track than the original dark electro chant.

We now get another remix of the dance floor explosion that is "Fight" in "Fight (OutFight Mix By Outsight)". Outsight are a Newcastle UK based band and bring a more varied industrial sound to the track. It's aggressive, energetic and provocative, with good use of synthesizers. This is "anti-music", apart from the odd ambient and experimental turns it seems to take, but I suppose this is the nature of post-industrial music, even if I don't approve.

Next up is "Don't Move (Anthracitic Moths Remix)", a remix of the first new track by the Russian band. Starts very much in the dark electro sound and stays there unlike the original track. Creating a synth horrorscape from the start, the distorted vocals then come in and add to this feeling, the track still retaining much of a dance beat. The synths of Anthracitic Moths seems to grab you by the collar and pull you through a track whether you like it or not, the vocals in this case helping to complete the journey easily.

We now have our second remix of this track with "Rule The Empire (Perfect Symmetry Remix)", so everybody get their hands up once again, 'I'll rule the empire now'!. Perfect Symmetry are an electronic music project from Belarus. The track features a very trance like synth start which is at times too much in contrast to the dark electro vocals. But the combination then bounce along nicely together for a time at least. This one I really like parts of musically but in other its just too much.

Our second new track is "Satan Is Going To Visit This Party", so lets see if he does! Lots of drums to start making a fast beat, and yes I really think we are heading for another dance floor explosion. This also features some beautiful synth lines. The overall sound is aggrotech in nature with a large element of trance to make you dance. Not sure if its quite enough to get Satan to visit but its a good dance track anyway.

We finish with two more remixes of "Don't Move". The first is rhythmic noise style by the Russian Diezel Xzaust project. I am a fan of Diezel Xzaust and what I refer to as their poetic banging frenzies. One of my criticisms before is that I feel that sometimes they try to take things to far and it all gets to complex. But this time they have gone for it and got it spot on. A real fusion of drums, distorted beats and dance music. This will bring Satan to the party if he is not already here. The second remix is by WormZ, a great start makes me think our star guest will not want to leave the party. Unfortunately they seem to lose me a bit about half way through but eventually it pumps and pounds enough to keep my attention. Overall its an aggressive piece of aggrotech with some trance to make you dance, and when it does take off it flies high.

Conclusion:
My advice is go and listen to Freaky Mind's 'No More Manifests' album first because its really good and then come back to this, and enjoy both. Freaky Mind makes some explosive dance floor filling tracks and this album adds two new ones to the list, but this album also contains some really well chosen remixes. Its unusual when having so many remixes that I don't want to turn at least one off. To top it off its also very well produced by SMT Studio. So another high standard and high quality album from Freaky Mind. My highlights are the new tracks in the form of "Satan Is Going To Visit This Party" and the "Don't Move (Diezel Xzaust remix)". I am so sick of giving high marks its beginning to make me miserable but I have no choice.
# freaky-mind
# more-manifests
# russia
# synthematik
# aggrotech
# dark-electro
# harsh-ebm
# sinthetic-squad
# na-hag
# outsight
# liquid-red
# perfect-symmetry
# anthracitic-moths-
# diezel-xzaust-
# wormz
# rhythmic-noise
# tribal-industrial
# electro-industrial
# post-industrial
Aug 18 2012
Cortex Defect - 'Cortex Defect'
Previous article
Wavefall - 'Future Rock N' Roll'
Next article

Bandcamp
Synthematik
Freaky Mind - Surrogate is available at POPONAUT from 11,95€