for all the emptiness - Axioms 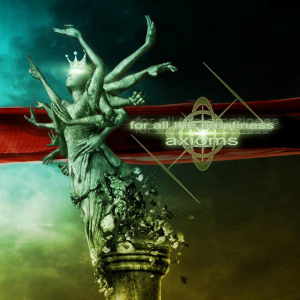 8.5
"Great"
N/A
Electroracle
Released off label 2011
Synthpop, Futurepop
We previously touched upon the future of this elegant, unique sounding act, and criticisms were heavy, but few. There were two issues with this act from Toronto, both of which have been tweaked and finetuned with the minutest of detail.

Firstly, the track order on the demo didn't carry any cohesion or intent, and seemed to randomly formulate a puzzle- like story.
Secondly, the vocals on first initiation were both Evangelic and Spiteful, and for a lot of listeners, the band was deeply misconstrued as a Christian act.

F.A.T.E is a deeply, almost fanatically anti-religious project, dealing with themes and lyrics questioning and challenging the need for religion. The vocals are the poisonous kiss that stings with Irony, and although the masses won't have heard anything like it, several listens later cause this project to quite simply become something of absolute resolute majesty.

An mp3 demo quite simply does nothing for this act - Look at the CD cover. "Axioms" is one of the most thought out and structured ideas I've seen in a decade, the entire booklet leaves me quite speechless at times, and the clever message left when combining the first and last pages expresses a meaning bolder and more devastating than anything music is usually capable of conveying.

"Identity" as an intro is both Martial in rhythm and style, and carries an echo of a pyrrhic victory. It's when it ends and there's the few seconds before we really know what to expect that makes "Blame" such a suckerpunch.

It's basically reminscent of Depeche Mode, with a concept that rewrites the genre. Lyrically, from the off, this project decimates everything dogmatic and orderly, and as tame as 'Blame' is;
(a world full of righteousness and who are we to blame, when our god brings us glory, yet he also brings us shame), this album quickly becomes a scripture of challenges and responses to everything written in the name of God - to do this with such a danceable, resounding style is rather special indeed - usually to incorporate such a theme, you'd end up making Black Metal.

Track 3 on here. 'Penance' is of a mind that can only really be categorised in one word - genial. The track sounds like dark, slow, brooding synthpop, but Kaplan's vocal melody and the lyrics on here would never seem remotely viable in any musical culture. However, and this is the the main reason why this project remains above almost anything I've heard this year, It is pulled off with both longevity and substance. A sample from Penance reads :

"there are no words when said that cause me to repent in terror.
no divine grace exists that claims man wretched and all fallen.
my hands are not stained with the blood of men who deem themselves my holy saviour."

What? Synthpop isn't supposed to be this deep...a fact seemingly not lost on Jonathan Kaplan, as he's decided to reign in his crusade against Religion at 9 tracks; 7 full songs, and the intro and outro.

'I Die' is a track that I remember from the demo, and it's been given a glorious re-master. It has a sample from one of the best things ever to hit a TV set, and as it builds up to the bars before the vocals start, there's the angelic, choral like sound that you always hear right before you either get goosebumps, or severely disappointed. I'm not disappointed.

If you give F.A.T.E the time and energy to get past the first track or two, you'll become curious, and likely addicted. Everything carries on down the road of lyrical depth, cunning and substance, and the music retains its harmonic, danceable (yet slow), and refined sound. Jonathan's hatred for religion is so passionate that it reflects onto the sound in a way that only the most committed can possibly reflect. 'Prayers' is a 'love me or hate me' track, it sounds a LOT like 'Just can't get enough', but it's more relevant to 2011, and the vocal style here is just bittersweet. Kaplan is singing his heart out, and it honestly sounds like he is praying for an end to everything he is trying to stop. I've never heard anything like it, and the song has hit me in a very personal way. The vocals cram in huge sentences in a short period of time, but the song just ends up anthemic and successful.
Lyrically, this holds a candle with Penance for track of the album :

the ethereal plains are now deafened and silent
no angels hear hopes, no wishes come true
will, strength, and effort does not entail success
sometimes the failure is simply guaranteed"

After this, the album continues down the same vein, and although none of the subsequent tracks are as highly rated, 'Spite' and 'No Paradise' are still very important. Finally, 'Loving Wrath' reminds me deeply of 'She Said Destroy' by Death in June, and the closing track 'When the World Ends' crams everything into 4 minutes and 10 seconds, and if you ever have the luck to hear this album and see the artwork in its entirety, you won't walk away unchanged.

Whether you accept this project for it's unique sound and vision, or not, one thing remains stubborn and unwavering;

for all the emptiness is divine. This release is the smartest, most ingenious album I can recall. From ideas, to lyrics, and the story that is flowing in the booklet, this stance against religion is done both respectfully and powerfully.

In a world where people would give thought to unfamiliar concepts, this could quite possibly open up the floodgates.
Would it be fair of me to consider Jonathan a Prophet of another kind entirely?

Either way, he has my attention. Watch this project, as there's a plethora of follow up releases in the works. You can even hear the entire project in full on the website. Oct 06 2011
Metaltech - 'Burn Your Planet'
Previous article
Wings that Bliss - 'Decipher'
Next article

We don't have any stores registered for this release. Click here to search on Google
for all the emptiness - Axioms is available at POPONAUT from 12,95€

for all the emptiness - 'second order'

Benjamin Alexander - 'It Won't Be Dark Forever, I Promise'