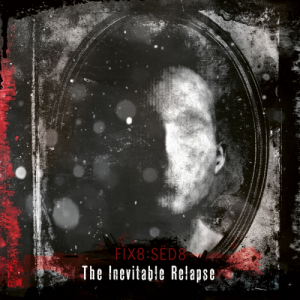 9.0
"Amazing"
Released 2021 by Dependent Records
Dark Electro, EBM
During the rise of the Covid apocalypse in 2020, Martin Sane also known as Fïx8:Sëd8 was hard at work perfecting the next offering of tantalizing complex darkened rhythms to add to our end of times playlist. "The Inevitable Relapse" was revealed in late January of 2021 as the dying world said good-bye to 2020 and drug companies scurried to develop a vaccine while the world dealt with not only a deadly pandemic but also sweeping social changes. As 2021 came in, many saw the vaccination of the world begin. Perhaps the lost rays of light were ready to return as we draw closer to the summer. Somehow, it still feels grim. Things will never be the same as they were. On a more positive note, artists have been very busy live-streaming, creating new ways to deliver their music and information. Deluxe editions, limited editions, apparel and other assorted merchandise have graced the pages of Bandcamp, FB and Big Cartel at a steady rate. The downside is that live performances have all but vanished since February 2020. In spite of all this artists like Fïx8:Sëd8 have found a way to sedate you for a short while to escape and avoid all of the pylons that stand in the way.
Fïx8:Sëd8's  first two albums "Humanophobia" (2005) and "Dormicum" (2009) were self-released and have since been long out of print in their physical forms. Years later "Foren6" (2017), "Warning Signs" (2019) and of course "The Inevitable Relapse" (2021) were all released by the well established and long running Dependent Records. The Dependent era saw a change in the sound. Perhaps the eight years between "Dormicum" and "Foren6" was a time of reflecting, exploring and ultimately refining the sound. The foundation remained the same with the detailed complexity of the arrangements, but the sound was a bit more polished and certain nuances could be more appreciated. The tempo seemed to drop a notch which allowed that complexity to shine even brighter.
"The Inevitable Relapse" delivers a focused approach. The attention to detail reinforces that very focus. Every sound, every sample, every tempo change shows a dedication to precision. 'Enigma' opens the doors to "The Inevitable Relapse" album with a long, driving descent into the human psyche. The patient / doctor audio clips along with the score lay the groundwork for what will follow. After about four minutes, the intro bleeds into a whirl wind of swarming synths and then again drifts back to the audio clips. The dynamics of this track create a visceral feeling of fear and uncertainty. 'Prognosis' really stands out with an opening audio sample from the 1985 film The Adventures of Mark Twain. It plays out the infamous scene in which Becky and Huck ask the mysterious stranger who and what they are, to which they reply that they are both an angel and that their name is Satan. Perhaps the prognosis of this medical condition causes the patient to experience existential dread and forces them to rethink their belief in the afterlife. The vocals have a duality to them where the deeper voice and the filtered voice go back and forth. 'Prognosis' is a powerful track that encapsulates the essence of Sane's skills to create beautiful mixes of atmospheric texture, aggression, definitive precision, perfectly placed transitions and imagery painted by the audio clips and corresponding arrangements.

Throughout "The Inevitable Relapse" that very essence is felt in each every track. 'Human Harvest' grinds forward with a methodical beat set to a less abrasive vocal style yielding some more melody and diversity to the sound. 'Tremors' features the vocal talents of Emke from Black Nail Cabaret. The vocals are strong and steadfast in the spirit of Black Nail Cabaret and seem to fit well in the album's overall flow. 'Unknown To Virtue', 'The Inevitable Relapse' and 'Meltdown' keep the album's energy level up in the mid-section. 'Unknown To Virtue' powers forward with lush textures paired with a mix of harsh vocals and enchanting synths while 'The Inevitable Relapse' churns out seven minutes of more existential dread set to a deliberate leisurely tempo allowing the listener to digest not only the music but the message as well, that is slowly revealed with each audio clip. 'Meltdown' raises the tempo a notch or two with a throbbing electro beat complimented by some great supporting backing sounds carefully woven in the fabric of the song. Nothing that Sane does says this is the easy way. The smallest of details inserted into each and every track bolster the end result.
'Pale Light Shadow' showcases one of my favorite transitions on the album. About two minutes in, the track shifts through a sudden burst of power and shouted vocals. As quickly as that change revealed itself, another transition is set up by an audio clip that settles the pace down before going off around the four minute mark to return the same feel we heard earlier at the two minute mark. As we near the end 'Chlorine Clean Tears' continues with a strong electro beat similar to what we heard in 'Meltdown'. At the four and a half minute mark, the song hits a brick wall and then picks up again. Like every song so far, the draw is the length and flow of the song marked by the creativity of each section of the track. I found this particular break / transition much different that anything else experienced on "The Inevitable Relapse" as the flow was disrupted with a complete stop of the music while an audio clip played. After about twenty seconds or so it picked right up again. The final track 'Metabolite' closes in a similar fashion to how it started with 'Enigma'. Another seven minute track that slows down around the four minute point to conclude with more audio samples set to slow repetitive driving synths until the sound wanes into silence. If your were fortunate to pick up the double CD version not only do you get a second CD featuring collaborations with Black Nail Cabaret, Jihad, Amorphous, Amnistia, Second Face, Akalotz, Frontier Guard, Cryo, Full Contact69 and Mildreda, you also get a thirty-six page hardcover book that's limited to six-hundred and sixty-six copies. Yes, it's probably long gone hanging out with the "Dormicum" metal box edition.

The Skinny Puppy influence is apparent but it does not upset the overall experience. Sure Fïx8:Sëd8 will appeal to fans of the Pup without a doubt, but there is a lot more to it than just one influence. The big picture reveals a vast circle of influences as well as a healthy dose of organic design. Martin Sane is a master of his craft and the product will back the statement no matter where you look in the discography of Fïx8:Sëd8. This is yet another statement to the legacy of Fïx8:Sëd8's intimidating complex and aggressive song-writing. I would expect nothing less from a fellow that wears scarecrow masks and collects doll heads. Feed your desires and give in to "The Inevitable Relapse".
# dependent
# fix8sed8
# pyrroline
# industrial
# martin-sane
# the-inevitable-relapse
Apr 22 2021
What's In Our Inbox? #57 featuring Stoneburner, The Gothsicles, and more!
Previous article
Designer Violence - 'Televised State Lies'
Next article

Bandcamp
Bandcamp/Dependent
Fïx8:Sëd8 - Warning Signs is available at POPONAUT from 44,95€