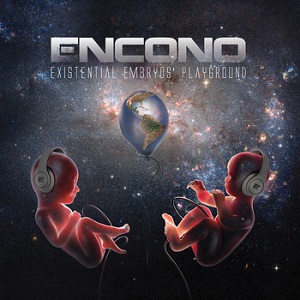 Spotify
Released 2014 by Insane Records
Dark Electro
Last time I heard from Encono, a dark electro trio hailing from Russia, they released a decent demo of three different tracks, and I got my hands on it and gave it a decent score. However, now they're back, now signed to Insane Records. Off this label, they're giving us a unique blend of tracks that were brought out by that demo, reworked with some other artists' influences, remixes done of the same songs, as well as a few new ones, to boot.

And, so, let's start off with the tracks that were done completely by Encono without other artists coming in to grace the trio with their musical presence. The first of which appears would be False Religion Mesisah. A nice steady electronic beat forms, faster, with ominous synth work lurking every now and then, particularly when the somewhat growling vocals make their presence known. A bit of a break down occurs around the two minute, ten second mark, allowing for a slower part of the song to kick in; an ambient presence forms with a few samples, before rolling right back into the main bulk of the song. This track had the pretty standard dark electro vibe to it, but it was done well.

At the Border of Fantasy is the second track which has all its original bells and whistles not being touched by any other artists. Slower, focusing on a few other random, sometimes out of place hits and misses does nicely all placed over a simple bassline. Again, not the most complex or catchy, but still nice.

Misanthropy Adept was the third and last song to be original. A few creepy samples of some moaning or crying out (it was hard to tell what they were doing) played out before slamming into a pretty heavy beat. The vocals were harsher this time around; much more aggressive than previous. I really liked the addition of keyboard tunes later on in the song; it gave it breathing room and refreshed it from what would have become an otherwise stale beat. Fairly well done.

And, now we'll talk about a few of the songs that feature another artist. Adios Puta! was a song originally available on the demo, and now comes featuring two different artists; Sleetgrout in the CD version, and Freaky Mind in the digital version. Sleetgrout manages to give the song a more clean feel to it, the vocals somewhat toned down, making the onslaught not as noticeable. Perhaps offering an even cleaner, more stable version, Freaky Mind for the most got rid of the distortion within the vocals and focused on natural talent. Both artists did a decent job with it, however, the overall song really just didn't change much from the original, and with only the vocals really being swapped out, listening to the same track twice wasn't necessarily the best.

My Salvation also originally appeared on the demo, but got a nice little treat with Stahlnebel & Black Selket on the CD, and Sin.Thetic Squad on the digital version. The same treatment applied with this song, however; the balance levels were fixed, the song had a higher quality, and the vocals were swiped out. Neither artist did a bad job, but, still, once more it was listening to the same song twice. Stahlnebel & Black Selket gave out a remix of False Religion Messiah, enduring drawn out synths in the beginning before eventually hitting a fast paced rhythm. I felt as if this remix was sloppy and a bit torn apart; I really just could not get into the feeling that everything was well put together.

AktiveHate joined in the fun with their mix of My Salvation. There was definitely a wall of noise produced in the song that made it hard to listen to at times; I think this was meant to be guitar work, but it really turned into annoying gutter work. When it disappeared however for a few seconds at a time, the electronics were a joy to get through.

Cygnosic offered a very nice remix of At the Border of Fantasy. Getting rid of all harsh elements and settling for a synth based, steady song with the vocals whispering all the way through, this was a treat in every sense. I loved the instrumentation in this track the most. Exemia also offered a remix of the song, going in opposite direction of the previous remixer, and inserting a fast paced beat with some choral samplings. The vocals were heavily distorted this time around, and they sounded evil. I liked it.

Aim&Execute gave us a remix of Misanthropy Adept, which kind of had a bland feeling to it, but managed to work nicely. It was a formula used many times before, but it worked well enough.

And, lastly, A7ie gave out a remix of Confession of the Innocent. Piano work struck in the beginning over a flare of ambience, and then the beat came in; a sample was struck right before entering the main beat. I thought it was going to be more of the same, but the electronics that were implemented, along with a bit of noise inputted for good measure, allowed this mix to stand above the rest. Very well done.

And, that's the end of that. Encono has all the makings of a dark electro band; a dark, sinister tone to them, lyrical content and song titles that suggest a harsh look on reality, and a decent image to go along with that. And they definitely know what they're doing; however, in order to move forward, they need to stop relying on old tricks (I really don't think vocal swapping and cleaning up demo songs was necessary here). Their newer songs were good, but they didn't stand out all too much; I think, as much as their image is exciting and sweet looking, especially when performing on stage, their music needs to match that exact persona. Still, I will wait for a full length release, and hopefully the best of them will come out with that.
# econo
# dark-electro
# insane-records
# existential-embryosand039-playground
Aug 21 2014
A new video from impressive Brooklyn industrial artist Statiqbloom
Previous article
Interview with The Mysterious Freakshow
Next article

Bandcamp
Encono - Existential Embryos' Playground is available at POPONAUT from 13,95€

Tri-State - 'Light The Khaos Within'

Freakangel - 'The Ones To Fall'