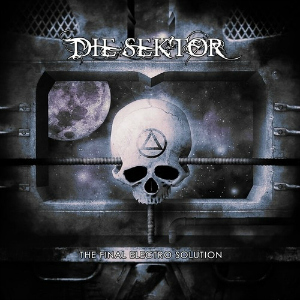 Spotify
Released 2012 by DWA
Electro-Industrial, Dubstep
Album of the Month June 2012 Album of the Year #2 2012
Back in 2006, fresh off the heels of 'Scraping The Flesh', Die Sektor signed with Noitekk, and without anyone really knowing what hit them, 'To Be Fed Upon' was released. It's still heralded to this day as one of the finest, most important "Terror" EBM albums of all time. It can also be seen as a cursed chalice, as the vast majority of fans are openly rejecting anything that the group release, due to a natural progression of moving on from a scene that's isolated in its own dark little corner.

With the departure of original vocalist John Gerteisen, and the arrival of Edwin Alter, Die Sektor are at a point where no band should rightfully be after just a couple of years - if 'Applied Structure In A Void' didn't capture your curiousity with the technical layer upon layer of sound, critically fine production, and new Electro-Industrial direction, then this release WILL. After a five year hiatus, it's taken just a year to release ' The Final Electro Solution', and you'll be forgiven for thinking that this shouldn't be.

With an art set leaning heavily towards the mystic (with the strange use of Triangles), a recurring theme that's very curious (skulls and planets), and a subtle nod towards the previous concentrics, Zila has once again demonstrated his penchant for the curious and the attention to detail courts a release swarming with intricacies in a marriage destined to be.


The Final Electro Solution - The title track starts off the release, and as a successor to ''Applied Structure'', it's as important as "Accelerant". It begins with a potent Bass line, which threatens something magical - which we find at 40 seconds. It's as melodic as some of the synth on 'To Be Fed Upon', and Edwin's vocals have found their comfort zone. The interesting thing about this track, and most of this release is the experimentation of Dubstep style bass sections, drops, and murmurs. Shying away from sounding like Shackleton and Skrillex, Die Sektor are simply fusing their already complicated sound with something that keeps the song so full and diverse that each listen opens a new door. A very strong track that thrives on melody and crazy bass - one you'll come back to time and again.

Feeding Famine - Personally chosen by me to be aired on Dark Essence Radio in April, this is the track that stands out to most. It's deeply melodic, as close to the earlier work as possible, and is the first of four tracks to reference the Four Horsemen of the Apocalypse - this is the main theme of this release, and there's plenty of symmetry to reflect it. The initial synth hook is replaced by Die Sektor's trademark- coherent bass that isn't content to do any less than a million things at once. The main hook here, just like on the title track is complimented by a miasma of smaller sounds; glitches, breaks, bass drops and harsher moments. It's as true to being an amalgamation of both previous albums as possible. Edwin's lyrics on here are as involved as the music, and the final verse sums up the feel of the album rather poetically:

" The trail of stars becomes a labyrinth. You could be the one to break my fall. Silence devours independence. Beneath the feet of swine we all crawl.".

There's hate here, for sure, but it's inspired, and inspired men achieve the finest of things.

Archetype - The track that took me the longest to really get, this is a fan favourite. It probably leans towards Dubstep heavier than anything else, but the involvement of the bass causes an entire palette of sounds to open up - not unlike some of the IDM and Jungle tracks i've heard. If an example of Die Sektor's attention to detail is required, this track is the obvious avatar.

The Just Will Be Silenced - Possibly the easiest to dance to, the union of bass and synth here is at its finest. It's reminiscent of the title track on 'To Be Fed Upon', but again utilizes the Dubstep style of bass to seal the deal. Any reservations about this have gone - Dubstep is prevalent these days, it's the 7th album I've heard this year that is using the genre, and really any stereotypical dispersions need to stop. The band are using the genre trademark to refine their own sound, and it works better than anything I could possibly have hoped for - this evolution is well warranted, there's a formulated stance on anything that Die Sektor put out, and it's fair to say the guys are wasted on the same sound every three years or so.

Conquest and Liberty - Track two to reference the Horsemen, this is the first instrumental on here - (like the previous two albums, each is 11 tracks, and each has three instrumentals). Just like the guys have done many times before, it's a track that's a fine fusion of gentle music, upbeat sounds, and IDM / Orchestral influences. It's nothing if not a temporary break from the heaviness of the album, but it also acts as a chance for Scott, Alan Edwin and Daniel to truly showcase their visions.

F:C-D - My favourite track on here is also the cleverest. It's the third to reference the horsemen, but it's done in a way so cunning that I had to find out directly from the band. When converted to numbers, the tracks title becomes "6:3-4". When this passage is referenced in the book of Revelations the following text meets our eyes :

"When the Lamb opened the second seal, I heard the second living creature say, 'Come!' Then another horse came out, a fiery red one. Its rider was given power to take peace from the earth and to make people kill each other. To him was given a large sword."

It's this detail that is applied to every track that makes Die Sektor an act whose trangressions can always be considered justifiable, if not appreciated. Musically, I consider this track to be among the best produced on here. It's so involved, as anything else on here is, but it just has a little something extra that really shines through when i'm jogging.

Inverted Structure - A strange track indeed, the vocals on here are uncharacteristically melodic, it features both clean vocals along with Edwins usual techniques, and the music is used more sparingly to ensure the juxtaposition between instrument and synthesizer is well addressed. After a few listens, this track becomes something of an anthem.

Nightmare - An instrumental track, shorter than usual, this track captures the effects you'd have in a horror movie, but speeds them up over a wall of glitch, dubstep and ambience. It's impossible to truly put it into words, but the three minutes that it lasts for are possibly the best three minutes you can have, unless you either really like Eggs, or suck at Sex. I'm pretty sure this song will help anyone with the latter.

Breaking The Balance - The final instrumental, and I find it a bit unorthodox to have two in immediate succession. It's possibly the best Instrumental the band have ever written. It reminds me of 'Infernal' and 'All Turns White', but it's winsome and majestic in its sound. If you have a subwoofer, you can expect to see it break down during this track, and in case your head isn't fucked enough, the Piano is introduced rather unexpectedly. Beautiful.

Pale - The final track to reference the Four Horsemen, it begins with a calming Piano riff, and all hell truly breaks loose, as if the horn has sounded and the prophecy has come true. It's the penultimate track to die for, and both lyric and music leave us in a pleasant purgatory - there's one original track left, but at this point, I can't take anything else in. I've listened to this in its entirety thirteen times, and on every occasion, each track is as good as brand new - how anyone can criticise such an album heavily is beyond me, but those people will truly miss out on something revolutionary.

The Final Electro Delusion - The typical Die Sektor synth is run through a Distortion plug to create a depressing, moribund 8-bit style sound which acts as the main chorus melody. It's extremely beautiful to hear, but also deeply unsettling - a fact which when coupled with lyrics such as:

"The rain, my tears were always on cue, The dread, the fear
It was always just for you"

leave no possible allusions as to the intent of the subject matter. Closing on a very grim subject matter usually makes or breaks an album, but based on the strength of the eleven songs here, there's no concern about that.

Cygnosic's remix of the title track is melody in abundance, and as Georg' has proven from "Fallen", his material doesn't leave much room for refusal to dance. It's a brilliant counter track for those who want to hear something more traditional.

CeDigest's remix of "F:C-D" hasn't given me anything to really say after seven listens. It's just...divine. They never fail to make something completely different, but the heartbeat sounds on here and the build up make this album just too much for a single listen.

Freakangel turn the 8-bit funereal sound on the closing track into a Guitar riff, making it into something even more poignant, and the track's much heavier in this incarnation.

The true surprise here is Distorted Memory's "Fulci" remix of "Feeding Famine". Probably one of my favourite remixes of all time, and I'm not even gonna spoil it.

Koltron's mastering has been HUGE on this release, and for four gentlemen to make something like this on what they've since revealed to be a terrible sound system and software set is disturbing. What the hell can they do with no budget? Chtulhu? I wouldn't put it past them.

I've given out a couple of 10's this year already, but this one just feels like it doesn't do justice. I can't say without any doubt that it will be album of the year, but if it isn't at the top in December, I'll personally e-mail our entire member list humiliating pictures of me. There's no testament I can give to Die Sektor that really stamps the importance of this album on the scene, but if you've got half a brain for technical Electro, you'll be able to help.

The DWA copy contains these remixes exclusively, and is limited to 200 digipak copies. There's also Noitekk and COP International versions with other remixers, such as Vigilante and FGFC820. It's all about personal preference. Jun 03 2012
Days Of Our Decay - 'Compilation Album'
Previous article
Interview with Cease2Xist
Next article

We don't have any stores registered for this release. Click here to search on Google
Die Sektor - The Final Electro Solution is available at POPONAUT from 14,95€

Rave The Reqviem - 'The Gospel of Nil'