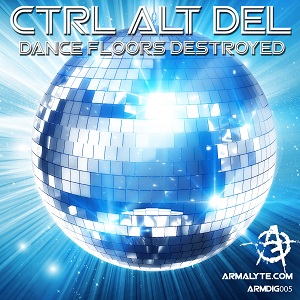 Now, I'm not one for dubstep too much, but I've a feeling from the get go that this might be an act I can get into. The first track, Destroy All Dance Floors, has made an appearance on the previous release, and it has a certain Japanese like flavoring to it in the form of really, really high pitched, almost cartoonish like vocals during the more d'n'b flavored parts. When the dubstep becomes more heavy, we're delivered the vocals of the man himself, which is more aggressive. It was an interesting pairing that contrasted each other heavily.

Monsta sort of continued that Japanese trend, with a focus this time on the King of Monsters, Godzilla. Anyway, the beat does slow down, and has samplings from an Asian woman. When the vocals are away, we're given a decent and steady beat that makes a swell mix of more d'n'b and dubstep.

The very honestly titled Everybody In The World Is Doing Something They Probably Shouldn't comes in next, and features some piano work here and there, though not heavy enough to completely change the fabrication of the song. A man shouts, "Hey!" here and there with a bit of a choral effect which I found to be cliche and kind of annoyed me for the brief moments it appeared.

Bitch Killer came out next, and really was more of a rhythmic noise track than anything which was a welcome change of pace. The beat is heavy and drops consistently. Sadly, it was a mere fifty seconds long and left me wanting more.

For All Your Tomorrows continued on with the dubstep influences, although the d'n'b wasn't as present as it was in the previous songs. Electronics took the main focus here, and this track almost sounded as if it belonged ina sci-fi shooter. I could much say the same about Yellow. Although, that song did play with a synth that really reminisced the sci-fi genre in my opinion (Just take a listen around the 3:15 mark).

And this is where we get into the remix/versus section. And, well, the first versus match we have going on would be the Armalyte Industries collaboration and titled song, Dance Floors Destroyed. Featuring the rapid guitar work we've come to know and love from the industrial group, Steve Alton's voice was also lent to the song which become prevalent during the second half. I liked the way both acts were able to combine with each other.

And then we move onto another household name that's becoming fairly popular, and also seems to be on a shit ton of different properties anymore, and that name would happen to be the lovely Ruinizer. Combining the heavier elements of his project along with the d'n'b of Ctrl_Alt_Del didn't lead to my favorite song on the album, but certainly left me impressed.

We then are given a mix of Destroy Dance Floors entitled the Bill 'n' Ted Mix, most likely named after the film franchise based off of two metalhead slackers traveling through time. And, not much changed about the song at all except for a different intro to the song, making it longer. It wasn't bad, but just redundant and pointless.

Coming back to Monsta, we're given the God Of Monsters VIP Remix. This mix kept much the same, but moves shit around to make the song heavier. I felt as if the bass in the mix was much more turned up than in the original, so the difference really came down to whether or not you want your whole house vibrating or not.

Cryogenic Echelon also made a versus song on the album with Soulstorm. The main attraction in this song came in the form of the lovely female fronted vocals that hit through the dubstep influences and shocked my ears. I felt as if the digital effects placed on her voice sometimes marred its beauty overall, but they were still a treat to listen to.

Darker act Death Valley Scars, promoting themselves as the most evil band from London, sort of takes a lighter tone in their versus match with these guys. Their vocals certainly still sound blackened, but the overall tone of the song doesn't seem to match their ferocity. Nonetheless, the added in guitar work was nice, and the song in itself was decent.

Defeat makes the next guest appearance in Funeral. Differing from most other songs on the album and rendering the dubstep influences near gone, the electro-industrial inspired project was certainly able to have their way with this song. Most notably that this song really includes a lot more synth work rather than wobbles and what not. I liked this one.

And, for the final three songs, we're given a treat when Petrol Bastard tags along with three different mixes, two of which come from the song Circuit Board, and the final of which is a remix for Priory Way. The first of the two mixes for Circuit Board is pretty odd, including really funny lyrics and vocals, with the most audible words being, "Fuck." Or, at least that's what it sounds like. Not only that, but I'm pretty sure the mix name, as well as the chiptune like sounds in the song, come inspired from the classic video game Double Dragon.

And, continuing on with more oddly sounding names comes the Runny Shit In A Trannie's Handbag Mix of Circuit Board. Odd, weird, and still going off hard dubstep sounds, the song was alright. When the vocals plow through, the beat just gets pretty damn hard and loud.

And, the final remix on the album comes from Priory Way, a Deleted Remix. And we're given a beginning dialogue that says the likes of, "Hi, Im' Sharon, the voice of CTRL ALT DEL. Those Petrol Bastards wanted a remix so we did one for them." So, with that just the beginning of the song, you could say that I was expecting much. And, I was delivered that with some nice and dandy dubstep, electronics, and the lyrics and vocals of Petrol Bastard. It was lovely; well, it was as lovely as two guys who call themselves Petrol Bastard can get.

And, to say it lightly, I had a fun time listening to everything this album had to offer. Where every time I thought I would get bored or here more of the same, I was proven wrong at nearly every turn. The highlights of this album definitely stand within the versus match ups, for every artist that this guy collaborated with was absolutely fantastic. Both Destroy All Dance Floors and Monsta were the solo starred songs by Ctrl_Alt_Del. And, to even so much as put this release out as a free to download album is beyond generous. You've no reason not to download this; you'll pirate everything else, might as well grab this since it's free.
# ctrl-alt-del
# armalyte-industries
# dance-floors-destroyed
# destroy-all-dancefloors
# dubstep
# petrol-bastard
# defeat
# death-valley-scars
# cryogenic-echelon
# ruinizer
# systemfx
May 16 2014
Aesthetic Perfection - ''Til Death'
Previous article
Interview with Valerie Gentile
Next article

The Prodigy - 'Invaders Must Die'