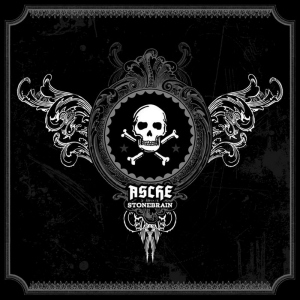 Spotify
Released 2011 by Ant-Zen
Rhythmic Noise, Powernoise
Asche is the Rhythmic/Powernoise, Power Electronics, and Ambient project of Germany's Andreas Schramm. It is a staple and popular act of Germany's Industrial and Powernoise record label, Ant-Zen. Andreas was also a founding member of the industrial group Ars Moriendi, and is a co-member of the ritual ambient project Templegardens, as well as other projects such as KYAM and Monokrom. He also runs FICH-ART, a small industrial music label founded in 1989. Other notable projects on this label include Moctan, Morgenstern, The Rorschach Garden, and Sabes.

Asche's latest release (back in 2011 to coincide with his U.S. tour), was his EP entitled 'Stonebrain.' It features one new track, alternate versions of earlier tracks, and remixes from some well-respected artists. The EP was released in Germany on Ant-Zen and in the U.S. on Industry8. It is available as a digi file and was limited to 500 printed copies (which included 2 Asche/Ant-Zen stickers and buttons). Free stuff is always a bonus! That's one thing I always appreciated about Ant-Zen. Every package I received would be filled with about 5 stickers/buttons. In this day and age, everyone is trying to make a buck, so it's nice that Ant-Zen supports their bands enough to give away free merchandise for their fans.

I want to start off by saying that I am a big fan of Asche. I really enjoy his work and his music is important to me. I was very excited to check out this EP, as I'm always anxiously awaiting to hear new material from him. I wish I had a lot more to say about this EP, but I was a little disappointed by it. Overall, this is a decent/good industrial noise album, and if you're looking to get into the genre, it's a great, approachable EP because it covers a wide variety of noisy genres. However, this EP didn't really blow my skirt up as it's somewhat minimal. It was enjoyable to listen to a new track and hear revisions of older ones, but I didn't really find any one track standing out other than one of the remixes. While most of the tracks sound reminiscent of Asche's previous works, the alternate versions of the earlier songs bring something a little new to the table for his sound. Also, the remixes blend rather well into the EP. None of them stick out like a sore thumb. Unfortunately, I just wasn't into where the tracks were heading (not to say you wouldn't either though). Asche has been releasing music since 1994 (since 1996 on Ant-Zen) and is an important artist for the Powernoise scene. His style ranges from loud distortion to dark ambient, and both of these genres are covered on this EP. I find that the EP ends up being a bit more Rhythmic Noise than Powernoise.

"Confusion" and "Last Words" sounded very similar to me, which was disappointing because since they are the first two songs on the EP, I felt as if I was listening to one eleven minute long track that never really went anywhere. They both had about the same tempo and featured undulating beats that didn't really change that much. 'Confusion' was an aptly named track because I honestly was confused by what I was hearing! That track was kind of all over the place and didn't really make a lot of sense from a musical standpoint. It sounded like he was trying to add elements of noisy dubstep, but it didn't quite compliment the rest of the music. The only difference for me was that 'Last Words' (with lyrics read by William S. Burroughs) had an old school vibe to it. It reminded me a lot of Revolting Cocks or Pigface, if either had decided to stick around and evolve their sound. The reading over the music kind of got annoying after a while. If I wanted to read a book, I wouldn't be listening to music. The songs are a bit more technical than I'm used to hearing from Asche, but unfortunately, they just don't do anything for me. They just didn't sound like Asche, if you understand where I'm coming from.

I was a little more into the next three tracks on the EP. 'Home Crisis' is the most heavily distorted song of the EP and sounds like typical experimental Power Noise, which brings us back to the way Ashe's earlier work sounds. It's a well-written track that fades nicely into the appropriately named track 'Steam Room (Count Suckers Reprise)', the most ambient of the tracks on this album. It's not ambient as in bubbling sounds or creepy occultist chanting. "Steam Room' is Noise Ambient and makes you feel as if you're sweating away while working in an industrial warehouse. I hate to compare the two bands, but 'Steam Room' reminds me a lot of some of Converter's more ambient pieces. Also, it really does sound reminiscent of the song 'Count Suckers' from Asche's last album 'The Easter Island Phenomenon', but with a twist, and it's also shorter in length. 'Queer Angel' is also fairly noisy, but has sort of an EBM feel to it. I really agree with the arrangement of these three tracks. I feel it was a good idea to break the two louder songs up with a steady song such as 'Steam Room.' This way you're not assaulted with Powernoise for 10 minutes.

'Distorted Doom (rmx by Theologian)' is my favorite track on this album. It's a very strong Death Industrial remix. For starters, it's super creepy. It takes it's time (almost 7 minutes) to build up into a massive swirling vortex of energy and noise. New York City's Theologian (also known as Theologian Prime) has been releasing quite a bit of music since 2010, but there is surprisingly not much information about him on the web. He combines Dark Ambient, Death Industrial and Power Electronics like no one else I've heard. And all of these genres are represented on this perfect remix.

HyDrone's remix of 'Last Words' isn't really anything to write home about. Typical Ambient Industrial, but it didn't really stick out for me in any way. I guess it's a good introduction to this lesser-known experimental act from Athens, but it doesn't really do 'Last Words' any justice. The original is better.

I was a little disappointed by Nin Kuji's remix of 'Queer Angel.' While it completely changes the way the song sounds by changing the genre into Tribal Rhythmic Noise, turning it into a more danceable track (which is quite a feat), it's very methodical and doesn't really go anywhere. It might be a good song to play for a dance party, but I think that it would bore dancers after a while because it's doesn't really change much.

On 'Dogday Sunrise (rmx by Iszoloscope)', Yann does what he does best and chops the crap out of this track, also from 'The Easter Island Phenomenon', and turns it into something that is completely his own. It's a great, complex and schizophrenic remix that does the original track justice. It's a great way to end the EP and leaves the listener with a sense of accomplishment that you got through listening to the whole album. Sort of like a reward. I don't know how, but the climax of this EP is represented with this song.
# powernoise
# power-electronics
# industrial
# asche
# ant-zen
# rhythmic-noise
Sep 30 2013
IIOIOIOII releases video for the track "Rising Sky"
Previous article
Kuroshio - 'Biomechanic'
Next article

The Truth About Frank - 'The Carrion EP'