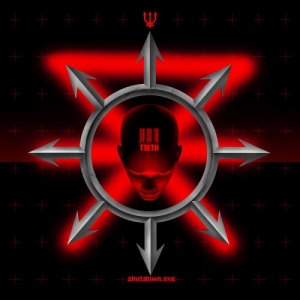 9.0
"Amazing"
Released 2017 by OMF Records
Industrial, Industrial Metal
Album of the Month May 2017

Once upon a time in June of 2013 a mysterious band by the name of 3TEETH uploaded the first to YouTube that would launch their entire career. I'm sure that at the time the members of 3TEETH had no idea what they had just done but they started an unstoppable industrial metal juggernaut that would shatter through realms of thought. When they released their self-titled debut I could hear the earth cracking below me as America gave rise to a motivated, ass-kicking band with a front man who sports one of the greatest mustaches of all time. The release of 3TEETH was met with widespread acclaim from our site as well as practically every single other critic out there but the future would continue to count 3TEETH's successes.

3TEETH were able to break boundaries outside of the industrial scene as they got hand picked by TOOL to perform with them on tour - a feat which is almost unheard of in the modern industrial scene. Their sudden breakout helped draw in a new audience and even caused a generous gleam of faith in the industrial scene the likes of which I had not seen in quite some time. From random Facebook posts to forums to even friends praising 3TEETH for their success, it was quite remarkable what they were able to achieve.

The outstanding record 3TEETH garnered in such a short while would feather out as they got personally involved in the scene by releasing a remix album of their debut with songs chosen for release by 3TEETH themselves. After a single released in 2015 titled 'Sell Your Face', 3TEETH soon began teasing their next big, yet to be named album with 'SlaveGod'. The appropriately noise-wall filled song beckoned away from their original album with a newfound focus on production techniques and polish, as well as perfected synth urges, deep growls, and screams.

While 'SlaveGod' met the ferocity of 3TEETH's metal approach it was important to note that they had not forgotten their roots or inspiration. When 'Degrade' dropped months after 'SlaveGod' it was immediately apparent that the group was not stepping away from their gritty, filthy electronics by channeling their rage through aggressive synthesizers and much more. However their red hot album attention grabbing song would not be released until the Fall of 2016.

'Atrophy' shot out like the Mother of All Bombs when it was dropped as it had everything that made fans love 3TEETH in the first place; a barrage of political attacks and frustrations attached with a destructive and speaker melting back drop. The video for the song sparked the song even further showing off a metaphor as a burly bastard of a politician plays with a gimp suit slave until the very end when the tables turn and Mincolla is seen strangling the man in charge.

Now I can get to the present - or at least a week and a half ago. Before releasing their new album on May 19th, 3TEETH released another music video for what will likely be the final single before the album releases called 'Shutdown'. The video for the song shows 3TEETH in an alternative universe where they are labeled as an anarchist group spiking drinks and causing mayhem - or opening people up. Once again the band knocked it out of the park and pushed their gritty sounds to new levels without suffering the in the way of quality or debasing fans.

shutdown.exe is much more than just those four songs and going into this album expecting a similar experience to all released prior to the album is a mistake. The crawling opening leads through what sounds like middle eastern religious chants that are slowly met with thumping percussion and ambiance. It's after that amazing opening that chants turn into a hybrid of grave patterns and instrumental. It's clear that 3TEETH was not afraid to go crazy and experiment on the album and that is fantastic.

'Pit of Fire' introduced us to a new vocal style from Mincolla as not only were his regular screams and decimating chords present but actual singing came from him as well. This new blend of soft, electronic moments of peace and blistering metal shrapnel dueled with one another. After another play of 'Atrophy' I was greeted with 'Oblibion Coil' which brought things back to basics. The song stuck with a robotic touch to the song adding a digital layer to the album. Another loop of 'Shutdown' and 'Degrade' went and I was back to exploring the rest of the album.

'Tower of Disease' pried open 3TEETH's jaws and showed their fangs as slamming percussion, epic synth noise, riffs ran through the song. After a brief instrumental intermission that was 'Tabula Umbra' played through, 'Voiceless' hit in next. This is one of the more beautiful songs on the album where another vocalist pairs next to Mincolla's voice and forces a ray of light into the otherwise dark album. I took another turn through 'SlaveGod' just because shutdown.exe is not an album where any song is skippable and head banged my way through it once more.

The verse of 'Insubstantia' was a fantastic display of thumping percussions and electronic foreplay with either the same or similar vocalist from 'Voiceless' entering in between Mincolla's shouts. The chorus however slammed on through with more riffs - and in the final twenty seconds of the album I was surprised to meet a fairly cinematic and sweeping sound. Both 'B.O.A.' and the final song 'Away From Me' fed the industrial metal machine and closed the album with a couple of easy going songs. 'Away From Me' even sent me off with somber but charming piano chords and ambiance.

With the final notes of 'Away From Me' calling out my journey through shutdown.exe had ended. I do hold this album in high regards and it is hard to compare it to anything. Whenever I am asked about it I get the question, "How is it compared to their debut?" or something along the lines. I can only say that both albums are their own beasts. The real improvement I see within shutdown.exe is how 3TEETH has honed their craft and improved production. shutdown.exe is more crisp, clear, concise - it has maturity and sound manipulation written all over it. Thus I conclude that 3TEETH's shutdown.exe is one amazing fucking album that will likely hit End of the Year list's like crazy coming this winter season. It is heavy, it is synthetic, it is hard, and it might make your neighbor look at you weird. But just play the music louder and let the looks keep on coming - you do not need approval when you have 3TEETH.

Bandcamp
3TEETH - shutdown.exe is available at POPONAUT from 12,95€