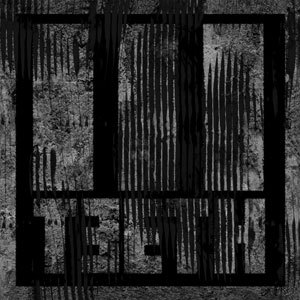 8.5
"Great"
N/A
Electroracle
Released 2014 by Artoffact Records
Industrial, Industrial Metal
Album of the Year #17 2014
The mysterious 3TEETH have been slowly reaching out to everyone's radar with their old school industrial sounds with a modern twist. Altogether, as they so stated in an interview with amodelofcontrol.com, they introduced themselves by stating that there are "...4 of us and collectively we have 128 teeth." Showing off a bit of humor is always nice, but the darker themes of the album seem to completely override that attitude of the band.

Creating a sort of post-human lecture in each and every single one of their songs, before everyone's eyes were glued to computer screens, the mere manifest of 3TEETH is pretty alarming. Their logo is simple, with their name and three parallel but thick bars just below it. And they don't try to fancy themselves as the best thing in the world; modesty is a key component with this band, and they aren't trying to completely takeover the scene with big words that boast greatness. This is the type of act where they let their music do the talking, and, already, I have huge respect for the guys.

As far as their debut and self titled album goes, I received a digital promotional copy that is not only filled with music, but all sorts of other goodies, including two books. Each folder is split up into four categories; EARS, EYES, MIND, and MOUTH. The EYES category is the simplest one to take in; you're given the artwork of the album itself, and additional, but creepy, edited photographs. I found the creepiest one to be a photo in which men in tribal garb stand before a technologically equipped man (a camera even hoisted on his head) with logos for big corporations (McDonald's, CocaCola, Google, etc.). The one closest to him kneels before him, and kisses his hand. Behind them is a faceless man in a suit, watching over the event. The logo in the bottom left corner is a play on the Nike logo, with says, "Like" instead of the brand's name, and below it reads, "this ad was brought to you by 3TEETH's operation mindfuck*". Also, for you crafty people, there's a stencil cutout of the logo.

In the MIND folder were found two books. The one book, Freedom From the Known is by Jiddu Krishnamurti, a writer who focused on philosophical and spiritual subjects who lived from 1895 to 1986. I've not had the time to read through this book, but judging by what the man focused on, I can only say it adds to the overall feel of the album. The other book was Prometheus Rising by Robert Anton Wilson. The man himself is a number of things; mainly a writer focusing on futurism and psychology. The book itself was written as an "owner's manual for the human brain," showcasing how to get from point A to point B.

The last section before the music itself was MOUTH, and this section focuses on the government's invasion of privacy on the internet. There's a letter from Sang Mun, a concerned citizen and inventor of the ZXX typeface. Pretty much, what the typeface does is allow the human eye to still be able to read the text, but it masks certain software from being able to mine your data. You can learn more of this project by watching the video below.

Now that all that's taken care of, we come to the main section that most want to hear about: EARS. This is where the album is actually located, and I've said enough to just get straight to the music. Nihil starts off the album in such a lovely and gloomy fashion. Taking it back with rigid industrial metal, 3TEETH have certainly made a mark on my mind already. The harder drum/noise work that plays within the album fits perfectly, and the vocals are nice. They aren't toyed with too much digitally, and give off an aggressive tone to boot.

Consent comes in at number two. Drums take precedence for the majority of the intro before getting hit with some more noise and the like. After a quick succession of more angered lyrics, a sample comes in recounting thoughts of what democracy is, as well as more samples to follow later on. The samples were placed extremely well, as it seems as if there's a bit of an argument going on between the people speaking within the samples and 3TEETH; it was a lovely horror show to listen to.

A very low sound begins off Pearls 2 Swine before getting into an EBM like sound, with metal clangs going off here and there. The vocals in this song sound rather robotic for a change in pace, and some riveting guitar work comes in about half way through the song and as the conclusion to send us off nicely.

Track four, Dust continues the mayhem that we've been experiencing from the beginning, giving more nods to industrial metal of the past, not the grotesque cyber-metal that's been destroying the very foundation of the genre for the past few years. Perhaps my favorite part of the track begins off at the two minute twenty second mark when all goes quiet, and a choral effect appears that slowly builds straight back into slamming sounds.

Zeit is a quick forty second intermission with a few noises here and there with more choral effects. It transitions right from the previous song, and work nicely. Just as quickly as it comes, though, it's off before sending us into my favorite piece on the album.

Slower, moodier, and more engaging than past songs, Master of Decay, to me, is the pinnacle of this band's work. With the drums working just slightly faster with the slow mounting synth in the background, the song came out beautifully. The chorus is absolutely fantastic with guitars streaming down with a trickle of electronic effects that add to the overall sensory overload. The vocals are worked in nicely as they come in with a sort of growl, but fade out in an echo.

Unveiled soothes things out greatly; rather than crashing through the gates with heavier tunes, the song plays out quite calmly. As the half way mark in the album, it serves as a sort of change in pace. It was a welcome addition to the playlist.

However, that calming sensation only lasts for a little before getting straight into Dissolve. And, rather than putting focus on electronic work, the more gruesome vocals are coupled with the meatier guitar and drum work. This song comes closest to the metal half of industrial metal than all the other songs thus far.

Eradicate offers the most digitally fucked with vocals, at least in the beginning. With the man behind the mic shouting the title of the song loud and swell, it creates a shrieking like effect, and it persists throughout the album. However, not all the vocals are like that, which is beneficial to the song. I feel as if the shrieking were more present than they were, the song would have been rather ruined.

X-Day continues where Dissolve left off, making another imprint with metal sounds. With a main chorus that shouts, "Get the fuck out, get the fuck out!", this is not a song you'd want to play around your grandmother around Thanksgiving...Or any other time of the year, for that matter.

Final Product definitely has roots in EBM with the electronic beat really echoing that genre. However, the guitars once more did not isolate the song to just that placement; I think, beat-wise, this song was pretty well done.

Getting close to the end, Antiflux led up a beautiful and quiet synth lead to the bulk of the song with a thirty second intro. The synths continue throughout the song, and make me feel as if this song belongs in the eighties; it just has that gritty sort of feel to it that reminds me of a good-guy-takes-on-corrupt-city kind of movie.

Second to last song, Chasm, definitely puts its focus on the drums and creates a bit of a tribal feel to it. The samples inputted to the song are well and nice, as they sound like they belong in a sort of ritual. The whispering from the vocalist was downright creepy, but worked well.

Lastly, we come along Too Far Gone. To send us off in a nice manner, we're given an instrumental to end it all. This song also deserves a place in a soundtrack to a movie; perhaps right when a major battle is about to occur. As the armies assemble, this song plays just before they clash for the ultimate battle. Every sound used previously comes to play in this album; from the guitars, to the drums, to the synths, every piece of equipment comes out in full force with this song. It was delightful.

And, that's where this whole album ends. However, the amount of work put into the overall package and feel of this work makes it more than just music or another CD to collect. It makes it a grand work of art. Every single file put into this album, digital or not, was well thought out; and, judging by that, I can only say that the lyrical content of each song was well placed and well deserved. From the debut album by a band I've only recently heard of, this has managed to impress me more than a lot of the shit I've listened to this year. Go out and get your copy; there are great things to be heard from this band.

Storming the Base
3TEETH - 3TEETH is available at POPONAUT from 13,95€